U.S. president-elect Joe Biden's transition team is using a propaganda tool known as "arrogation," evidenced by their invention of the term "Office of the President-Elect."

On November 10 2020, disinformation purveyors began pushing memes containing claims that the transition team for Joe Biden — the winner of the 2020 U.S. presidential elections — invented the “Office of the President-Elect,” and that they were doing so using a form of propaganda known as “arrogation”: 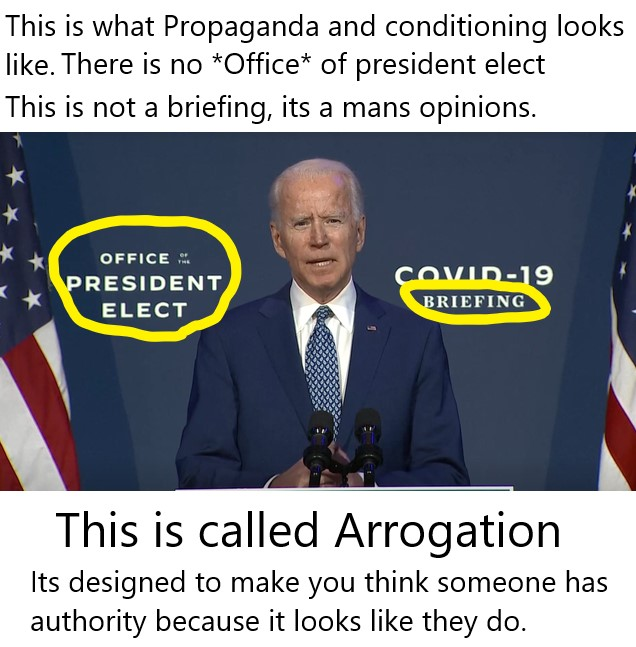 Text above and below an image of Biden (which was against a background reading “Office of the President Elect” and “COVID-19 Briefing”) read:

This is what Propaganda and conditioning looks like. There is no *Office* of president elect. This is not a briefing, its a mans opinions.

This is called Arrogation. Its designed to make you think someone has authority because it looks like they do.

As with many post-election claims and memes, there were a few things to unpack in the above example.

The term’s meaning and origin predictably became a topic of discussion in the wake of the election, but — as various news stories explained — it is nothing new:

According to Britannica, the phrase appears in the 20th Amendment, ratified in 1933. It is used there to allow the vice president-elect to become president if a President-elect died before taking the oath of office.

“In the old days, you didn’t have a president-elect until the Electoral College met; that’s when the title becomes official,” [Executive Director of UVA Center for Politics, Larry Sabato] said.

‘There is No Office of the President-Elect’

This is easily disprovable.

Just after the 2016 election, while United States President Donald Trump had been elected but not yet inaugurated, the 2016 United States House of Representatives issued a memorandum called “Guidance on House Staff Assisting in the Presidential Transition” [PDF]. It was attributed to Rep. Charles Dent, a Republican, who used the specific phrasing “Office of the President-Elect.”

Not only did Dent’s memo employ the phrasing “Office of the President-Elect,” it also said that this same entity was financially responsible for certain expenses prior to Trump’s inauguration:

The legislative history of the 1976 amendments to the PTA indicates that “on a reimbursable basis” means that reimbursement of the employees’ salaries by the transition is required. One purpose of the amendments, according to the Senate report accompanying the amendments, was to “require that when personnel is detailed to the office staffs of the incoming and outgoing Presidents and Vice Presidents from a federal department or agency, reimbursements must be made to the appropriate agency for such services.”

House employees detailed to the transition retain full House salary and benefits but become responsible to the President- or Vice President-elect for that period, rather than to their employing Member. The Office of the President-elect, however, must reimburse the House for the salaries of the detailed employees.

Nor was that the first time the office had been invoked; the phrasing “Office of the President-Elect” turned up during the interregnum period between the Bush and Obama administrations, quoted here in the headline of a Fox News article in 2008.

That story also quoted an expert who noted that the “Office of the President-Elect” was indeed an office, although it does exist, naturally, in something of a transitional area:

As president-elect, Obama is also given the same highly classified intelligence briefings that President Bush receives on a daily basis. And Obama and Vice President-elect Joe Biden get full Secret Service protection, which Obama also received during the Democratic primaries and general election campaign.

But the “Office of the President-Elect,” while critical in building the future government, has no official power — which Obama himself acknowledged during his victory speech in Chicago on Election Night.

“It is an office — it’s just a quasi-government office for planning the takeover of the government,” said Stephen J. Wayne, a professor at Georgetown University’s department of government.

“Obama has no formal power as far as the existing government is concerned, but he has a lot of informal influence, which President Bush has encouraged,” he added.

The same article also suggested that the credibility of the “Office of the President-Elect” was important in order to project the image of a functionally intact United States during a time of transition (classically times of potential unrest and instability):

Despite its lack of formal power, some argue that the “Office of the President-Elect” must maintain an official and authoritative front — even if just for show. This transition comes at a particularly vulnerable time for the U.S. government in protecting against terrorism — as evidenced in 1993 when terrorists bombed the World Trade Center as former President Bill Clinton prepared to take office.

On Friday, December 2 [2016], President-elect Donald Trump talked on the phone to several leaders around the world, including Taiwan President Tsai Ing-wen, who was elected Taiwan’s first female president in January of [that] year.

In a press release, the office of the President-elect announced that the two exchanged congratulations and “noted the close economic, political, and security ties exists between Taiwan and the United States.” A normal day in the busy schedule of the newly-elected President, one would think.

‘This is Called Arrogation’

Memes and 4Chan /pol/ threads labeled the use of the phrase “Office of the President-Elect” new (which it was not.) Additionally, some commenters — who had clearly just learned the word “arrogation” –baselessly claimed that the term was being suppressed in Google searches and that it had been struck from the Wikipedia entry on “Propaganda”:

Of interesting note. Arrogation and Absurdism have both been removed from the Wikipedia entry on Propaganda.

Others asserted searches for “arrogation” led to suggestions for “irrigation” instead:

You have to consciously tell the browser to look up SPECIFICALLY that spelling to even find the definition. This means Google is 100% in on this too.

In short, if Google was attempting to suppress searches for “arrogation” and “the Office of the President-Elect,” they were failing — a search for the term “arrogation” alerted searchers to a bevy of terms related to whether or not the office was “real.”

Wikipedia’s entry for “Propaganda” indeed did not mention “arrogation.”

A Google search for “arrogation” and the Wikipedia page for “Propaganda” also returned no results.

For reference, “arrogate” was defined as follows:

1a: to claim or seize without justification
b: to make undue claims to having : ASSUME
2: to claim on behalf of another : ASCRIBE