Astronaut Michael Collins said "if you had any balls, you'd say 'oh my God what is that thing?' then scream and cut your mic" when Neil Armstrong pondered what to say on the surface of the moon.

Memorials, reminiscing, and memes following the death of astronaut Michael Collins in April 2021.

We saw one popular meme pop up again and again, claiming that when Neil Armstrong was pondering what he might say as he stepped onto the surface of the moon Collins quipped, “If you had any balls, you’d say ‘oh my God what is that thing?’ then scream and cut your mic”: 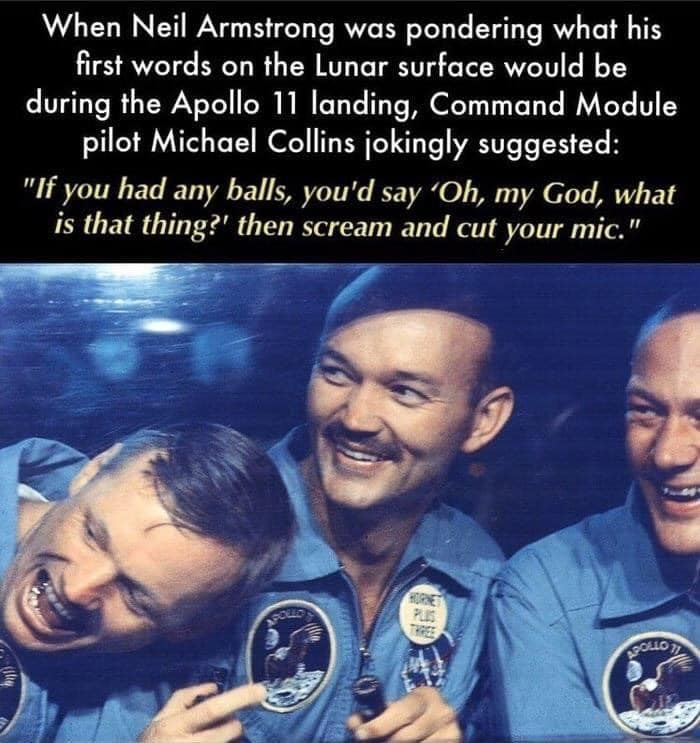 The meme showed a photograph of three men in flight suits, with text that read:

When Neal Armstrong was pondering what his first words on the Lunar surface would be during the Apollo 11 landing, Command Module pilot Michael Collins jokingly suggested:

“If you had any balls, you’d say ‘Oh, my God, what is that thing?’ then scream and cut your mic.”

In that context, the joke was reasonably obvious — Collins’ suggestion was predicated on the insinuation that the first humans on the moon might discover something alarming. The meme called to mind a related Twitter meme (“Moon’s haunted“) along similar lines:

nasa employee: oh hey u guys are back early

astronaut: *loading a pistol and getting back on the rocket-ship* moon's haunted

A Very Brief History of Urban Legends About the Moon Landing, Quotations Edition

A very old and very widespread urban legend about Armstrong’s first words on the moon spread similarly, and was based on a joke.

In August 2012, NBC News published a story addressing, among other things, the claim that Armstrong cried, “good luck, Mr. Gorsky” during his spacewalk:

Myth: During the moon walk, Armstrong made a cryptic comment, “Good luck, Mr. Gorsky,” in honor of a childhood neighbor of his in Ohio whose outraged wife had screamed that she’d perform a sex act requested by her husband “when the kid next door walks on the moon.”

Fact: The comment is not on any recordings or transcripts, nor was it heard by anyone in real time. It appears to have originated from a comedy routine by Buddy Hackett.

Myth: Just before reentering the lunar module after Apollo 11’s EVA, Armstrong made the enigmatic remark, “Good luck, Mr. Gorsky.” When Neil was a boy, Mr. Gorsky was his neighbor in Wapakoneta. One day while playing ball in the backyard, the story goes that young Neil heard Mrs. Gorsky shout at Mr. Gorsky: “Oral sex! You want oral sex? You’ll get oral sex when the kid next door walks on the moon!” This joke still runs rampant on the Internet and there are millions of people who believe it is true. It is totally false. No Gorsky family ever lived in Wapakoneta or anywhere else near Neil Armstrong. The author of the joke was comedian Buddy Hackett, who told it to Johnny Carson on NBC’s “Tonight Show” sometime around 1990.

As those articles focused specifically on Armstrong, neither mentioned the claim about Collins’ “if you had any balls …” remark — but the items demonstrated the massive influence of the moon landing on popular culture.

Not a New Anecdote

In 2019 and 2020, before Collins died, at least three Twitter accounts shared the claims of the meme (one attributing it to a dramatization):

There's a scene from the series "from the earth to the moon" when they're discussing before hand what he should say and Michael Collins suggests, "if you had any balls at all, you'd scream 'WHAT THE HELL IS THAT?!?!' and cut your mic."

My friend @Ellis1701D posted this, and I would love to know it happened: Michael Collins made the following suggestion to Armstrong to announce upon stepping onto the lunar surface: "If you had any balls, you'd say 'Oh, my God, what is that thing?' then scream and cut your mic."

What Michael Collins wanted Neil Armstrong to say "If you had any balls, you'd say 'Oh, my God, what is that thing?' then scream and cut your mic." https://t.co/GQRayCZGnZ

Collins to Amrstrong re: 1st moon words. "If you had any balls, you'd say "Oh, my God, what is that thing?" then scream and cut your mike."

Around April 28 2021, the rumor made its way back to social media as people honored Collins:

"If you had any balls you’d say, “Oh, my God! What is that thing?” Then scream and cut your mic." Michael Collins to Neil Armstrong https://t.co/h2cEzUCCss

I heard today that before the lander left for the moon, Michael Collins told Neil Armstrong that if he had any balls his first words on the moon would be "oh my god what is that thing?" followed by a scream and silence, and I have decided to believe it for the rest of my life.

Some acknowledged the claim sounded like an urban legend:

"If You Had Any Balls, You'd Say 'Oh, My God, What Is That Thing?' Then Scream and Cut Your Mic

There is a story, I'm not sure if it is urban legend, that Apollo 11 command module pilot Michael Collins said this when discussing what Neil Armstrong shoul… https://t.co/pDmts2toIB

At least one person went to the source, asking astronaut Buzz Aldrin if the story was accurate:

You've probably been asked this a million times but, did Collins really make the joke telling Armstrong, "If you had any balls you'd say, 'Oh my God, what is that thing? scream, and cut your mic?" Too bad, if not true. That would have been genius.

The anecdote was also shared to Imgur in 2016, along with an “it is believed” qualifier.

According to Wikipedia’s “Apollo 11 in popular culture” page, the anecdote dates back to at least 1998:

Portions of the Apollo 11 mission are dramatized in the 1998 HBO mini-series From the Earth to the Moon in the “Mare Tranquilitatis” episode. In the episode Michael Collins suggests to Armstrong what he should say upon stepping onto the lunar surface: “If you had any balls, you’d say ‘Oh, my God, what is that thing?’ then scream and cut your mic.”

An April 28 2021 Decider.com listicle in honor of Collins mentioned the quote and its context as dramatization or fiction:

Cary Elwes portrayed Collins in the 1998 HBO miniseries, From the Earth to the Moon. This includes an alternate version of reality, in which Collins suggests Armstrong should say, upon stepping on the Moon: “If you had any balls, you’d say ‘Oh, my God, what is that thing?’ then scream and cut your mic.”

A Google search for the specific phrasing only returned 38 results, further suggesting that the quote originated with the HBO dramatization versus actual historical accounts. Early mentions of the quote (such as a 2012 Slashdot thread) indicated that before the meme came into existence, people broadly understood the quote to be fictional.

No mention of the quote or anything like it appeared on the Wikipedia and Wikiquote entries for Apollo 11. A 2019 Atlantic article curated “banter” from Apollo 11 from NASA logs, but the quote did not appear in that piece.

That’s not to say the logs were free of profanity or colorful language; at least one included exchange involved plain speaking:

Armstrong: Isn’t that something?

Armstrong: Get a picture of that.

Collins: Ooh, sure, I will. I’ve lost a Hasselblad. Has anybody seen a Hasselblad floating by? It couldn’t have gone very far, big son of a gun like that.

Armstrong: Now, what do we have—is that all the … ?

Collins: You had the switch on inside. [Garble]. Oh yeah. Okay. [Garble] automatic light control features.

Collins: Well, that pisses me off! Hasselblad gone. Find that mother before she or I ends the [garble]. Everybody look for a floating Hasselblad. I see a pen floating loose down here, too. Is anybody missing a ballpoint pen?

Aldrin: Got mine. Is it ballpoint, or is it [garble]?

Collins: Yes, ballpoint. Here it is. I mean felt tip.

Collins: [Garble] much embarrassed to say they’ve lost a Hasselblad. I seem to be prone to that.

Claims that astronaut Michael Collins suggested “if you had any balls …” to Neil Armstrong about his yet-to-be-uttered first words on the moon were virally popular after Collins died in April 2021. The phrase appeared to originate with a 1998 HBO dramatization of Apollo 11, From the Earth to the Moon. Early variations on the claim attributed to the fictionalized program, but the anecdote drifted to the realm of unverified lore by the mid-2010s. We found no evidence that the quote ever originated with Collins, merely that the line between on-screen and off had been sufficiently blurred by 2021.