Roughly a month prior to her death, Midwin Charles tweeted "just got vaccinated," adding that she qualified because of her asthma.

After the sudden death of commentator Midwin Charles (disclosed on April 6 2021), a tweet attributed to Charles stating that she “just got vaccinated” circulated on Twitter: 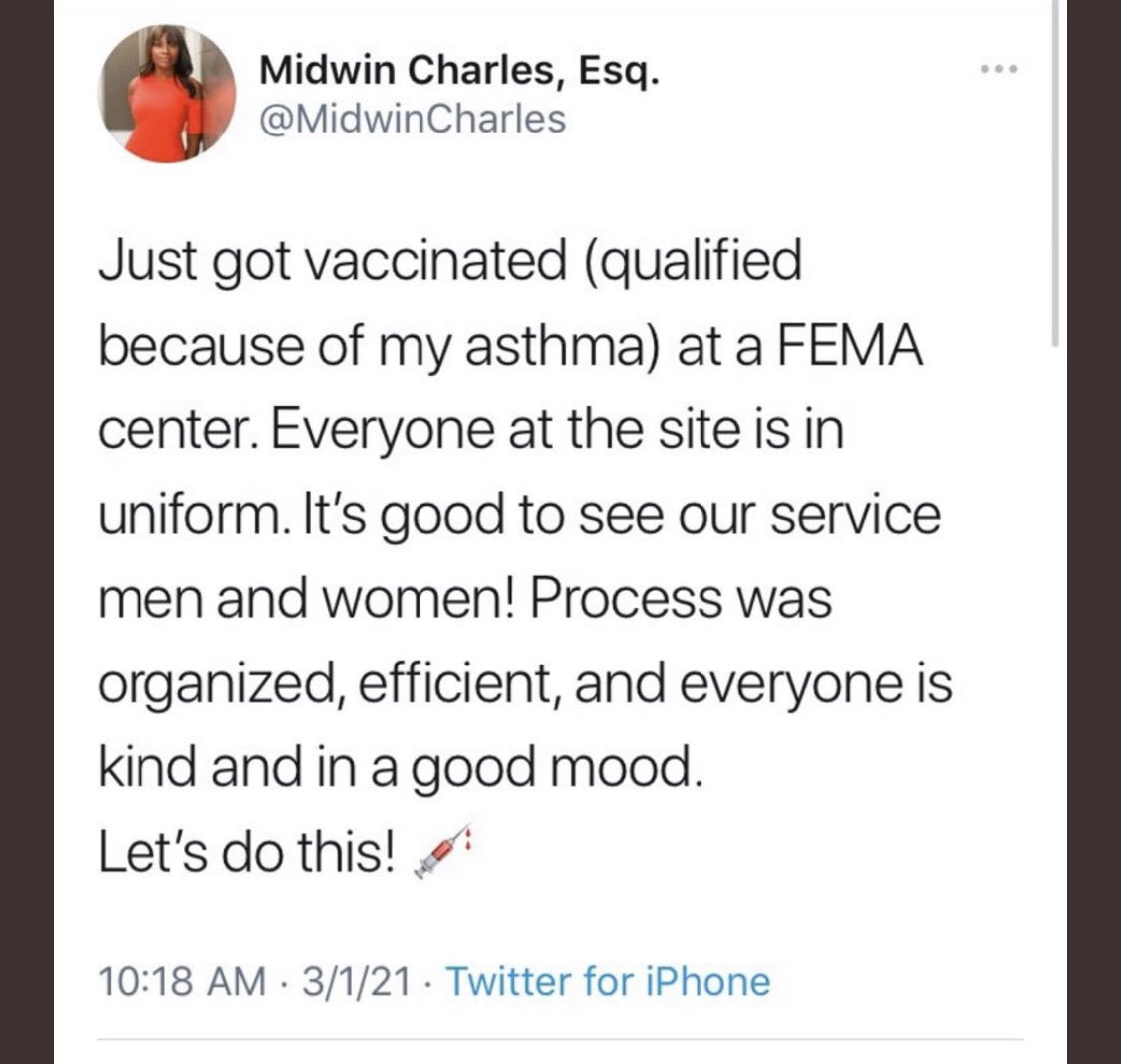 Just got vaccinated (qualified because of my asthma) at a FEMA center. Everyone at the site is in uniform. It’s good to see our service men and women! Process was organized, efficient, and everyone is kind and in a good mood. Let’s do this! 💉

It is with a profoundly heavy heart and the deepest sadness that we announce the untimely passing of our beloved Midwin Charles.

She was known to many as a legal commentator on television but to us she was a devoted daughter, sister, aunt, niece, and cousin. Our lives are forever changed and we will miss her for a lifetime.

The family thanks you in advance for your love and prayers. Please allow the family time to grieve

The Family of Midwin Charles

Because of the lack of details, such as a disclosed cause or date of death, and Charles’ relative youth (she was 47) , speculation and search engine optimization were likely to come in to play, in many cases intended to generate traffic through those searching for more information.

Some Twitter discourse on April 7 2021 alleged a that there was some kind of conspiracy to delete Charles’ confirmation of her vaccination:

Midwin Charles is now dead at 47, with no cause of death reported. She was vaccinated in March, but the tweets confirming have been deleted. When will people question the risks, folks dying of nothing in their 40s?!

We began by scrolling back through Charles’ Twitter timeline (@MidwinCharles) for tweets dated March 1 2021. Charles tweeted numerous times on that date, the first at 1:19 AM, the next at 9:07 AM, and again at 10:48 AM. None of her tweets were timestamped 10:18 AM. (A tweet with a matching time and date stamp can sometimes serve as a “template” for falsified tweets.)

A web search for Charles’ handle @MidwinCharles and the word “vaccinated” initially only returned a March 15 2021 tweet by Charles about her mother’s vaccination on that date:

Mom got the vaccine while praying to the Lord! I’m sooooo happy! This took weeks of convincing by the way. It’s gon be a hot elderly girl summer! 😎 pic.twitter.com/spZjeqOoyt

Another initial search result was a December 2020 tweet by Charles, in which she criticized politicians who downplayed the virus only to receive the very first vaccinations that month:

See what I mean? The folks in power who sat by and did nothing while this administration downplayed the virus, it’s response, and aid relief to the people are first in line to take the vaccine. I’d this isn’t a metaphor for America, I don’t know what is. https://t.co/GmM9nQvuWx

However, we finally were able to find the tweet with an advanced Twitter search. It was published at 10:18 AM on March 1 2021 by Midwin Charles:

Just got vaccinated (qualified because of my asthma) at a FEMA center. Everyone at the site is in uniform. It’s good to see our service men and women! Process was organized, efficient, and everyone is kind and in a good mood.
Let’s do this! 💉

Two days later, Charles responded in the thread to say that she, like many others, had experienced mild side effects that had since subsided:

Pfizer. I think I had mild fatigue after the shot as well.

As of April 7 2021, 63 million of the United States’ 328 million people had been vaccinated, meaning that just under 20 percent of all Americans had received a vaccine; Charles was just one of those 63 million vaccinated Americans. Additionally, vaccines were being offered globally, and public health experts everywhere emphasized their safety and efficacy.

Although Midwin Charles’ “just got vaccinated” tweet spread in screenshots and discourse versus retweets (and it wasn’t very easy to stumble upon), it was real. Charles disclosed that she received her first vaccine in a tweet at 10:18 AM on March 1 2021 — five weeks before her sudden death, which was disclosed on April 6 2021. We have rated the claim Decontextualized, as the tweet was neither deleted nor hidden, just hard to find; there was also no indication that receiving the vaccine contributed to her death, the cause of which was undisclosed as of April 7 2021, in any way.