In the spring and summer, people mowing lawns might encounter rabbit "nests," and should take care to protect the bunnies.

As spring began in the Northern Hemisphere, screenshots of a post warning readers planning yardwork to be on the lookout for rabbits and their nests began to circulate: 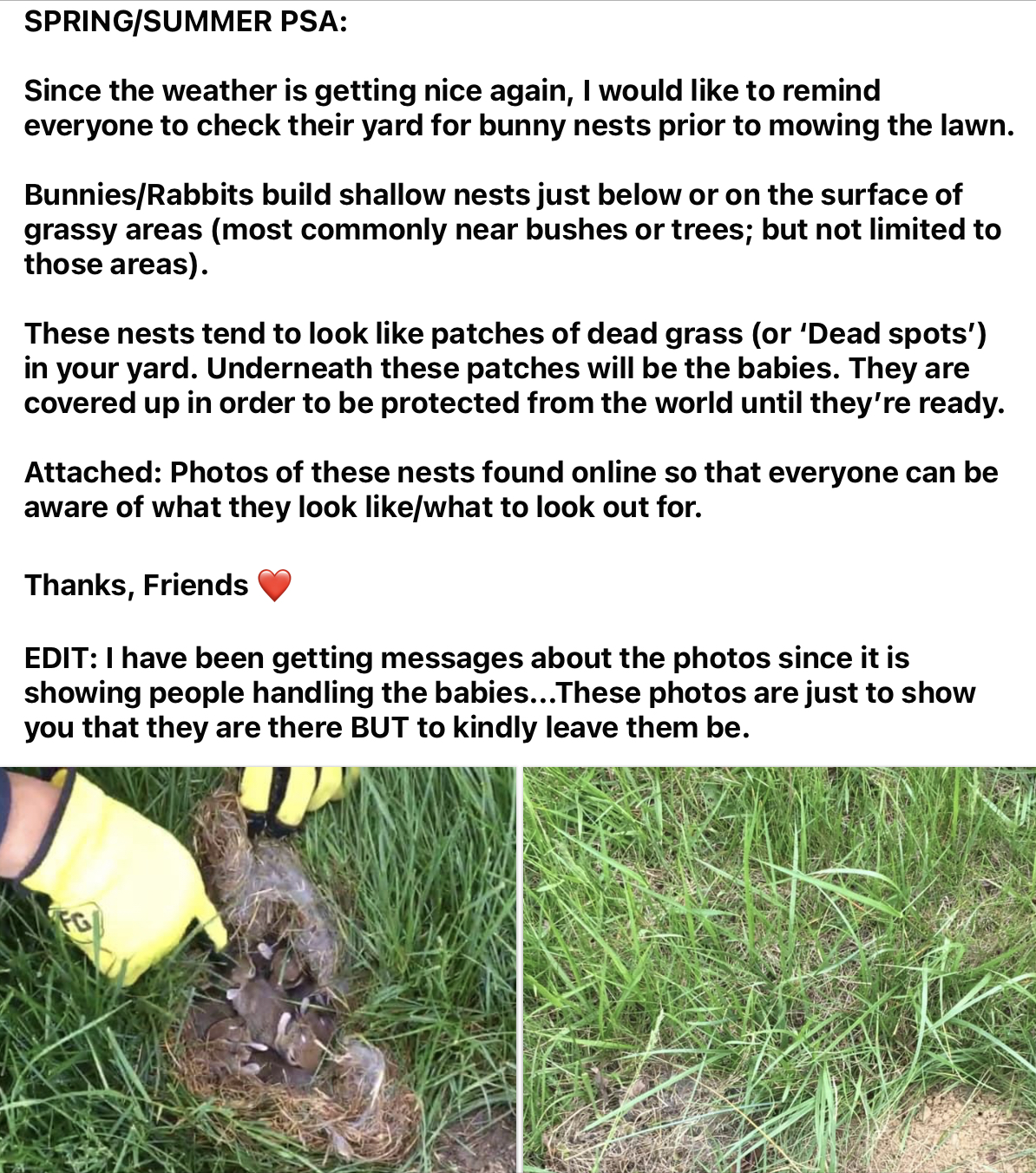 We were able to track down what appeared to be the original post (frequently shared as screenshots with no origin), published on May 17 2019. It read:

Since the weather is getting nice again, I would like to remind everyone to check their yard for bunny nests prior to mowing the lawn.

Bunnies/Rabbits build shallow nests just below or on the surface of grassy areas (most commonly near bushes or trees; but not limited to those areas).

These nests tend to look like patches of dead grass (or ‘Dead spots’) in your yard. Underneath these patches will be the babies. They are covered up in order to be protected from the world until they’re ready.

Attached: Photos of these nests found online so that everyone can be aware of what they look like/what to look out for.
Thanks, Friends ❤️

The post was shared nearly a quarter of a million times. It also showed photographs of patches of grass and baby rabbits (“kittens”): 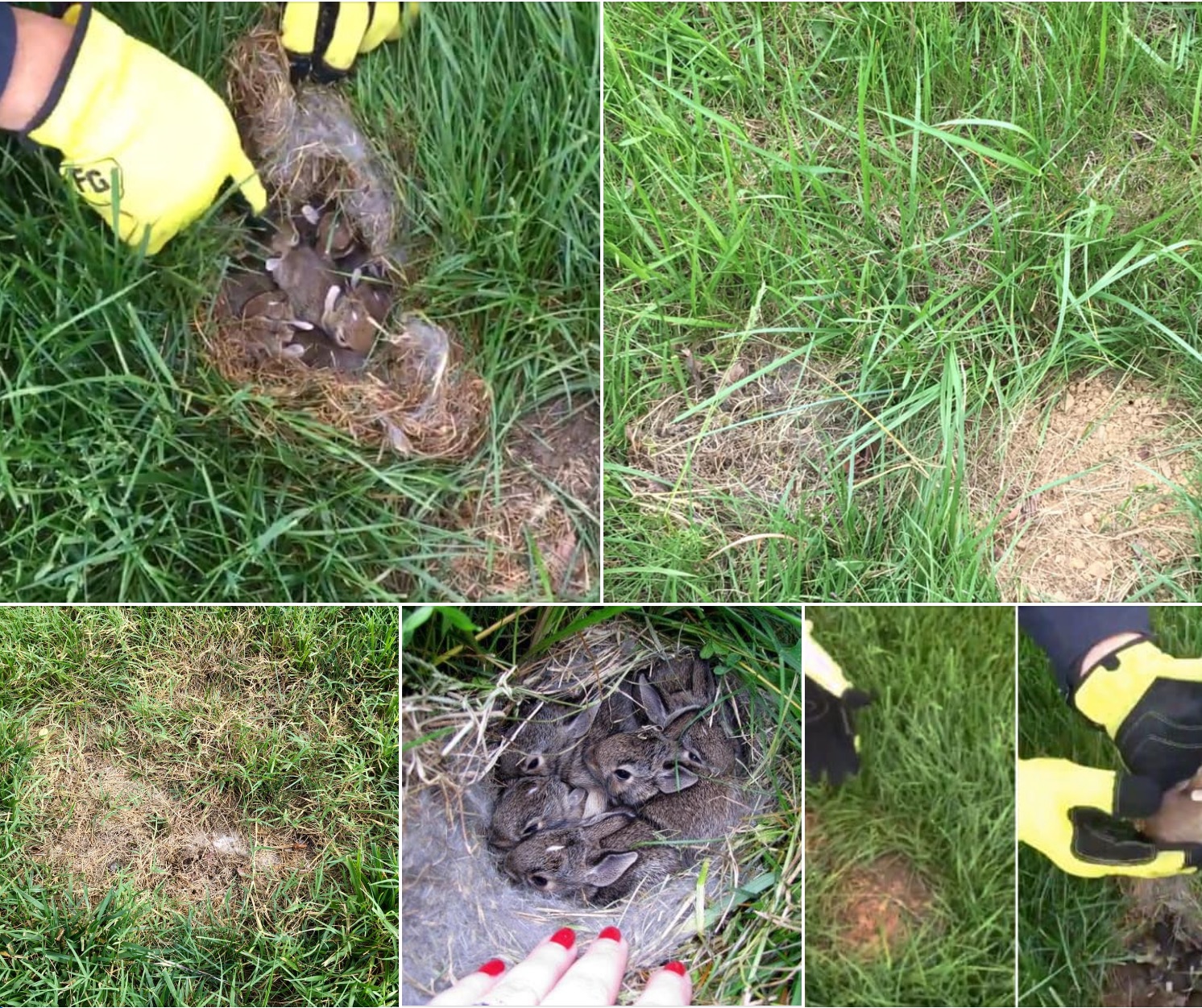 Clockwise from the top left, the images appeared to show the following:

An April 14 2020 edit to the post addressed the last image, further advising readers not to “handle the babies,” and to “kindly leave them be”:

EDIT: I have been getting messages about the photos since it is showing people handling the babies…These photos are just to show you that they are there BUT to kindly leave them be.

That post, although it was very popular, was not the only very viral Facebook post about rabbits and bunny nests, and how to avoid harming them during breeding season. A March 2019 post with a six-figure share count urged readers to respect “bunny season,” and indicated that kittens are “frequently ‘kidnapped'” by well-intentioned humans:

*Bunnies are one of the most frequently “kidnapped” mammal species.
*Mothers dig a very shallow nest in the ground that is easily uncovered when mowing or raking the yard. If you find a rabbit nest-leave it alone!!
*Mother rabbits only return to the nest two or three times a day, usually before dawn and right after dusk.
*To determine if they are orphaned, either place a string across the nest in a tic-tac-toe shape or circle the nest with flour. Check the nest the next day. If the string or flour is disturbed, the mother has returned. If not, take the bunnies to a rehabilitator.
* A bunny that is bright eyed and 4-5 inches long is fully independent and does NOT need to be rescued!
*If you find a bunny that does need to be rescued, put it in a dark, quiet location. Bunnies are a prey species and while they may look calm, they are actually very, very scared!

It also included an image of a “bunny nest,” and visually illustrated tips for individuals concerned about “orphaned” rabbits: 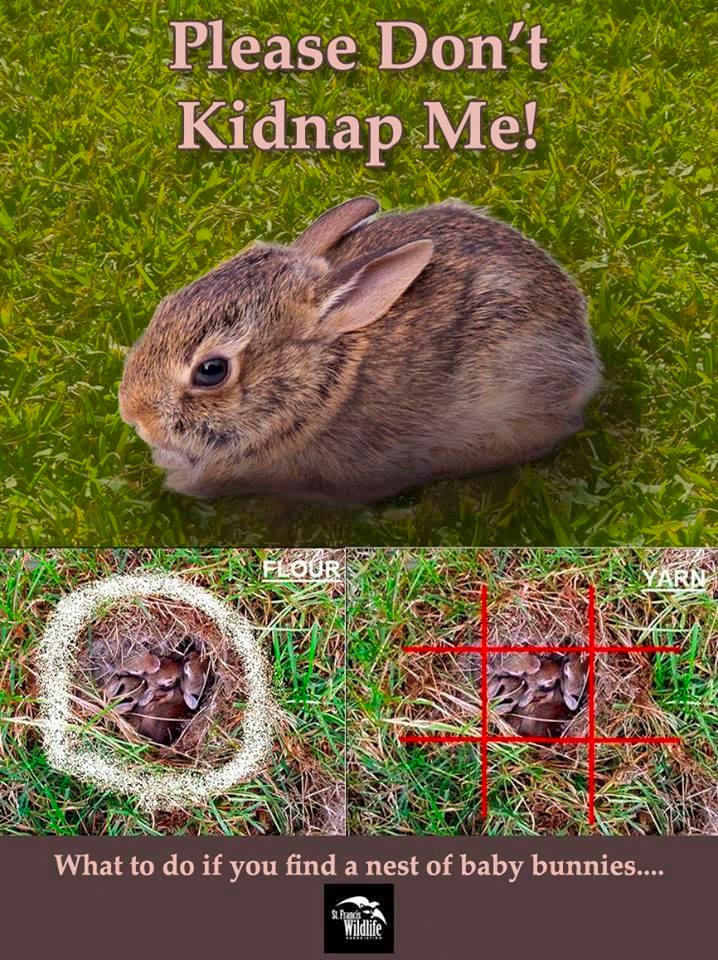 A rabbit at the top was labeled “please don’t kidnap me,” and two images of nests at the bottom were marked to demonstrate the advice offered in the post. On the left, a ring of flour surrounded the bunnies, and on the right, brightly colored red yarn criss-crossed the bunny nest.

Readers were advised to return to the marked nest the following day, adding that if the string or flour is disturbed, “the mother has returned.” In instances where the markings were undisturbed, people were advised to contact a wildlife rescue to save the possibly abandoned babies.

In September 2017, Insider International shared a short clip titled “Watch out for baby rabbits when mowing your lawn” to Facebook Watch; it was viewed more than 29 million times as of April 2021. A short caption read:

This video of baby rabbits will make you think twice before mowing your lawn.

The footage from the September 2017 video appeared to be the source for the widely-shared May 2019 post; the yellow gloves bore the same “FG” markings, the Insider International post was extremely viral, and the video appeared two years earlier. Text on the first frames of the video read:

Subsequently, an individual from Ontario Wildlife Removal discussed the bunny nest issue, explaining that well-intentioned people frequently contacted the group about rabbit kittens they believed were abandoned. That person added that most encountered baby rabbits were not orphaned, and the best approach was simply to leave them alone:

The mother rabbit will only come back once, maybe twice a day. So everybody gives us a call and says “you know, we’ve got baby rabbits, we don’t see mum around” … please just let ’em be. We know they’re growing up — which means we know that they’re getting fed. So if you see a rabbit’s nest let it be, they grow up quick, within a couple weeks they’ll be gone.

On April 3 2021, Cuba, Missouri Animal Control shared a post about a rabbit found in similar circumstances, and explained how nests could be safely located and protected — as well as what to do about orphaned kittens:

It’s wild bunny season and this little one was brought in by someone that accidentally ran over the nest while mowing the yard. This is one of two that were brought in the last couple of days.

ACO Cameron has much wildlife experience and very familiar with their needs. He took them home where they are warm, safe and doing well.

FYI, (copied from post by Dr. Lee Pickett, June 2020). Wild rabbits stay away from their nests most of the day to avoid attracting predators. They return for only a few minutes at dawn and dusk when no one is around.

Mother rabbits use grass and fur to make nests, They do not need to sit on them all day as other species do. Most rabbits build their nests out in the open, sometimes in the middle of the lawn.

Rabbit milk is so rich that mothers need to nurse their young only five minutes a day. The babies grow quickly, leaving the nest within a few weeks.

Before you mow, temporarily cover the nest in your yard with a laundry basket so the babies don’t bolt and get hurt by the lawn mower. If your pet disturbs the nest, rebuild it, and return the bunnies to it. Then keep your pets away.

You and your children can peek at the baby rabbits, but don’t touch them. If anyone picks up a bunny, return it to the nest. A little human scent will not prevent the mother from caring for her young.

If the mother rabbit was killed, contact a wildlife rehabilitator who can best raise the orphaned bunnies or contact us and we can get them the help they need.

Finally, posts from Facebook users who had located rabbits in their yard prior to mowing were not uncommon. A separate April 3 2021 post emphasized that as people began regularly mowing again, the risk to rabbit nests increased.

That advice noted that the presence of loose fur — used by the mother rabbit, or doe, to line nests and keep her kittens warm — could create the false impression that the baby bunnies had been attacked, which might cause people to panic and remove the rabbits. Tufts’ Wildlife Clinic advised people to “leave well enough alone,” noting that baby bunnies have low survival chances when they become separated from their mothers. The clinic also advised gently marking the area to ensure the bunnies weren’t orphaned:

If you find baby bunnies and tons of fur that make it look like an attack has taken place, don’t panic. Rabbits nest by making shallow indentations in the ground, which the mother insulates with lots of her own fur, and they stay away from the nest from dawn to dusk. To check for the mother’s return, lay string in a tic-tac-toe pattern across the nest and return 12 hours later to see if any of the strings have been disturbed. If so, leave well enough alone. Baby bunnies are notoriously difficult to feed and care for in captivity, and you could do more harm than good by trying to get them to a veterinarian. It’s also not safe to move the nest for the baby bunnies, so if you have a dog that goes outside, cover the nest with a laundry basket (topped with a heavy object to keep it in place) during those times your pet is in the yard.

Whatever the type of baby animal, you can always call Tufts Wildlife Clinic at [number] for advice. We are happy to talk you through safety tips (such as always wearing heavy gloves if you must handle a wild animal), and we can refer you to a licensed wildlife rehabilitator, animal control officer or rescue group for further assistance with care or transport of the animal. If you are not sure whether to intervene or not, our staff also can review cell phone pictures and discuss possible options. Remember, it’s illegal to care for, feed or keep wild animals unless you’re a licensed rehabilitator—and not safe, either, for you or the animal.

That advice concluded with information about how to proceed in situations where rabbit kittens did appear to have been abandoned or otherwise separated from the doe, primarily contacting a wildlife rehabilitator and not interfering with the nest.

A 2014 VetStreet.com post reminded readers that “Mama rabbits are smart and visit their nests only when absolutely necessary to avoid drawing attention to it,” providing a short list of ways to keep rabbits safe. Like the viral Facebook post, the site suggested examining yards for bunny nests before mowing — and VetStreet.com included information regarding injured rabbits:

If you accidentally injure or find an injured bunny, call a local wildlife rehabber for advice. The Humane Society of the United States provides a state-by-state listing of these wildlife experts. If your dog or cat finds a nest and injures one or more of the babies, take your pet inside right away until you can secure fencing or call a wildlife rehabber. If your pet knows where the nest is, he may return to it, potentially causing more harm to the babies.

Many people mean well when they contact House Rabbit Society after discovering an “[abandoned]” nest of wild rabbits. Often they wish to “rehabilitate” them with some advice from others. The reality is fewer than 10% of orphaned rabbits survive a week, and the care that people attempt to provide can be illegal, unnecessary, and potentially harmful. The best thing you can do is to contact a wildlife rehabilitator in your area.

Since at least 2017, posts warning readers about a purportedly common issue of lawn mowers encountering rabbit nests have circulated. A very popular 2019 iteration (“Spring/Summer PSA”) included screenshots of a 2017 video from Ontario Wildlife Removal urging people to be mindful of bunny nests — but also reminding people to “let them be.” Wildlife experts have long advised people to check for rabbit nests before beginning springtime mowing, reminding readers that kittens removed from the care of their mothers are far less likely to survive. The post’s claims are true, and it is important to remember that most rabbit nests are not abandoned, and that rabbit mothers typically leave their babies concealed for long periods.