A "pretty awesome" Superman poster from the 1950s encouraged comic book fans of the day to advocate for diversity.

On April 6 2020, Imgur user u/Crabsforeveryone shared a “pretty awesome” poster of Superman which was purportedly released in the 1950s: 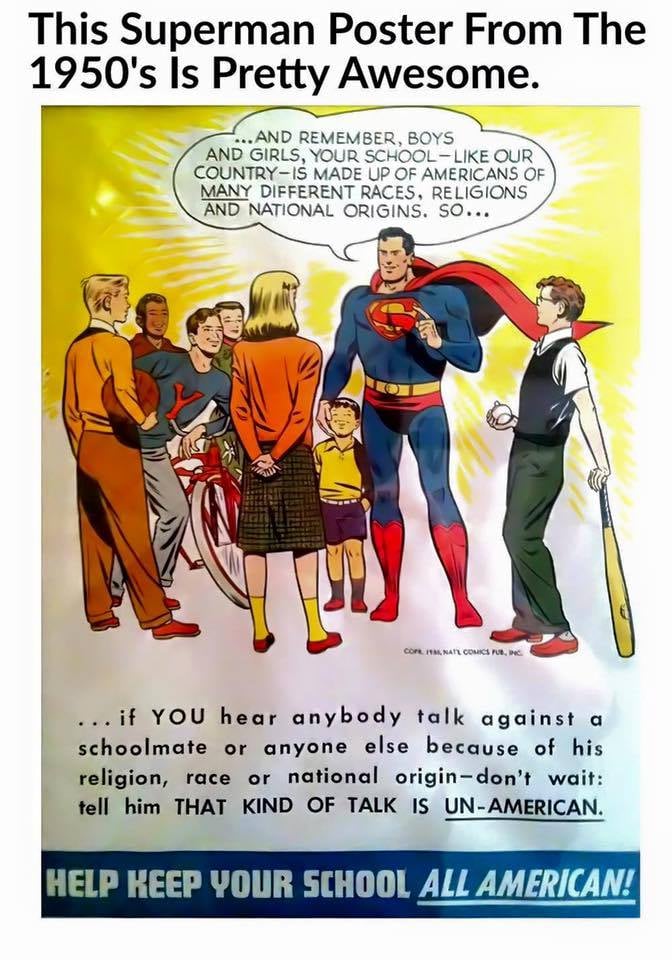 That post was image-only, with no links indicating whether the poster was accurately represented. Text encircling a depiction of Superman and seven children or teenagers was labeled “This Superman Poster From The 1950s Is Pretty Awesome,” and the first original portion of text was in a speech bubble attributed to Superman:

And remember, boys and girls, your school — like our country — is made up of americans of many different races, religions and national origins. So …

The text continued at the bottom:

… if YOU hear anybody talk against a schoolmate or anyone else because of his religion, race or national origin — don’t wait: tell him THAT KIND OF TALK IS UN-AMERICAN.

HELP KEEP YOUR SCHOOL ALL AMERICAN!

One comment by u/RiskIt4ABiscuit consisted of an image asserting that various related themes were pervasive in comics and that they were intentional aspects of those characters by their creators; that post included X-Men, Black Panther, Captain America, and Stan Lee: 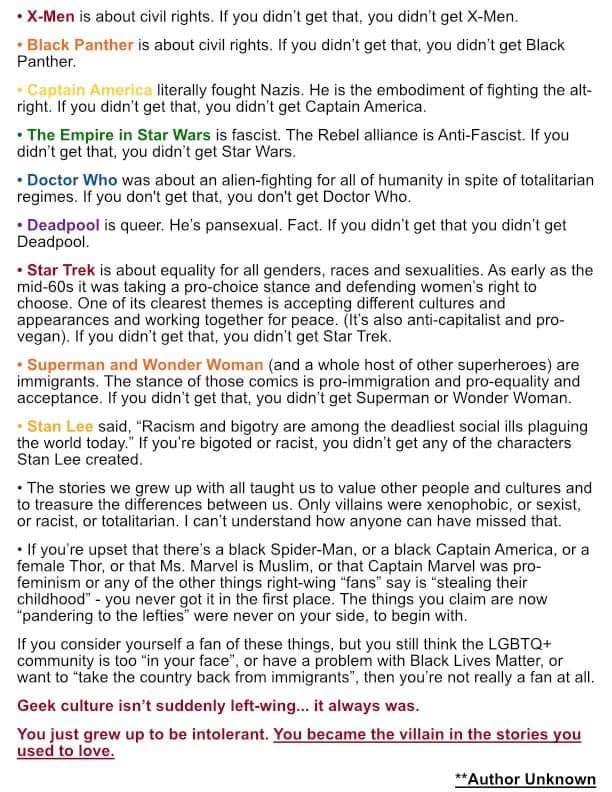 In the post, DC Comics provided context for the panel, saying that sightings were rare and that scant detail about their distribution survived as of 2017; the publisher also included a restored version of the image:

In a recently much circulated image of a 1950’s-era color poster, Superman can be seen speaking to school children about the importance of respecting diversity. Only a tiny number of these posters are thought to still exist and little information remains about how the poster came to be. But what we do know is that it was not the original source of that powerful image and statement. In 1949, DC (National Comics) produced this same image and text originally for a 12 x 18” brown paper school book cover that was distributed to schools by the Institute for American Democracy, an offshoot of the Anti-Defamation League. While the author of Superman’s reminder of the American creed is unknown, the art is believed to be by noted Superman artist Wayne Boring.

1949 was also the year that DC began publishing, in conjunction with the National Social Welfare Assembly, a long running series of public service messages using its characters in the pages of its comic books.

Although the April 2021 Imgur post did not address the image’s provenance, DC Comics confirmed its authenticity in 2017. According to DC Comics, DC began collaborating with the National Social Welfare Assembly in 1949, in order to bring messages about diversity to young comic book readers — which, given Superman’s international and immigrant-friendly origins, was no stretch at all.