As criticism and attention piled onto right-wing Florida Gov. Ron DeSantis (R) for shipping a group of fifty asylum seekers from Texas to Massachusetts, an immigration attorney accused federal operatives of lying to the immigrants as part of that process.

According to Rachel Self, who has been assisting the immigrants after they arrived in Martha’s Vineyard on September 15 2022, agents for the Department of Homeland Security (DHS) “listed falsified addresses” on paperwork given to the immigrants before their flights there.

“Agents apparently chose random homeless shelters all across the country from Washington to Florida to list the migrants’ mailing addresses, even when told by the migrants that they had no address in the U.S.” Self told reporters.

Self said that documents provided to the migrants, who entered the U.S. after making their way through the continent from Venezuela, required them to “check in” at Immigrations and Custom Enforcement (ICE) offices closest to their fake addresses — under threat of permanent removal from the country.

“It could not be clearer to ensure that these people are ordered removed even as they try as hard as they can to comply with the instructions provided to them,” she added. “There is no other reason to list as someone’s mailing address a homeless shelter in Tacoma, Washington when they shipped him to Massachusetts.

“It is sickeningly cruel, throwing obstacles in the way of people fleeing violence and oppression — some of whom walked through 10 countries in the hopes of finding safety. It is shameful and inhuman.”

Rachel Self, a Boston immigration attorney tells you everything you need to know about immigrants sent to Martha’s Vineyard.

They’d been given falsified U.S. addresses by immigration officials, perhaps ensuring that they’d be deemed in the country illegally. pic.twitter.com/mBp7AqBow1

Prior to Self’s accusation, there were indications that disinformation was used as part of the anti-immigrant attack; WBUR-TV and other outlets reported that several of the immigrants were enticed into being flown out of Texas by a woman who only identified herself as “Perla” while refusing to provide identification:

“She told us, who wants to come: we’re going to give you a free plane ride, and bring you to a sanctuary district,” [a] student said in Spanish.

“She used us,” he added. “She said we were going to have a place to live, we’d get money and food and even English classes.”

“They were told there was a surprise present for them and that there would be jobs and housing waiting for them when they arrived,” she said. “This was obviously a sadistic lie.”

According to the San Antonio Report, a 27-year-old man calling himself “Emmanuel” said that “Perla” paid him $200 for referring immigrants to her. He claimed that “Perla” said she wanted to sign immigrants up for the flight and offered to pay for their contract information:

He said Perla said she got the money from an “anonymous benefactor” and that the flight was paid for by that person.

Emmanuel said he ended up giving her the contact info because he wants to help people.

“A lot of people really come without plans, they want to come and just work and they have a hand that’ll provide them shelter,” he said. “I just saw it in that way, like a sweet way, doing it for good.”

The New York Times identified “Perla” on October 2 2022 as Perla Huerta, a “former combat medic and counterintelligence agent” and Florida resident who had been discharged from the U.S. Army the same month the “covert operation” took place. According to the newspaper:

A Venezuelan migrant who was working with Ms. Huerta to recruit migrants confirmed her identity, and a migrant in San Antonio whom Ms. Huerta had unsuccessfully sought to sign up identified a photo of her in an interview with The Times. Several of the migrants on Martha’s Vineyard photographed her during the recruitment process in San Antonio, according to Rachel Self, a lawyer representing the migrants. Lawyers working with them were able to match those photos with others online and in social media belonging to a woman named Perla Huerta.

Previously, on September 19 2022, journalist Judd Legum posted photographs of what attorneys representing 30 people in the immigrant group said was the brochure provided to them, which promised them benefits including “eight months cash assistance” as well as housing, food, and clothing services and “transportation to job interviews,” among others. 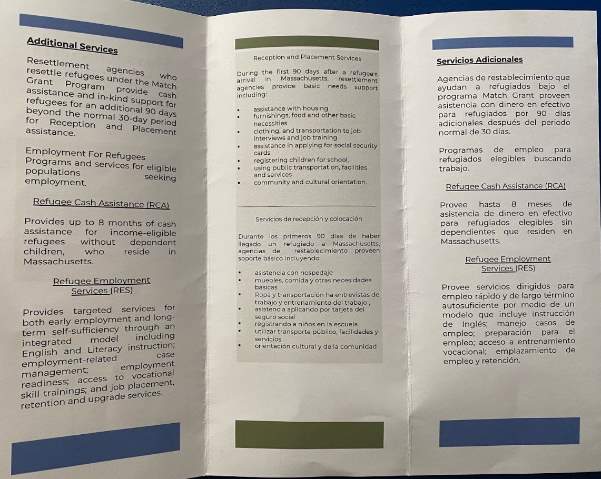 Matt Cameron, a Boston-based immigration attorney, explained that the benefits described in the brochure are resettlement benefits available to refugees who have been referred by the United Nations High Commissioner for Refugees and authorized to live in the United States. These benefits are not available in Massachusetts to the migrants who boarded the flights, who are still in the process of seeking asylum.

The migrants who boarded the planes “absolutely do not have access to cash, housing, and other resettlement benefits which are provided through both federal funds and partnerships with faith-based [organizations],” Cameron said.

DeSantis’ attack gained more attention just as Texas Gov. Greg Abbott (R) admitted that his administration was behind the shipment of yet another group of migrants to Vice President Kamala Harris’ residence in Washington D.C., in order to bolster their false claim — fed by years of debunked disinformation narratives — that Harris and United States President Joe Biden, along with other prominent members of the Democratic Party, have endorsed an “open border” into the country:

Do Democrats Pay The $5 Billion Wall Cost Every 10 Days to ‘Subsidize’ Illegal Immigration?

As well as years of paranoid rumors about voting rights:

Does Passage of HR1 Allow Undocumented Immigrants to Vote?

And claim after false claim about the number of people seeking asylum in the United States, along with wildly inflated numbers:

In reality, Customs and Border Protection officials estimated that around 2 million arrests would be recorded on the country’s southern border by September 2022.

The shipping of immigrants around the United States for political purposes also prompted the revisiting of similar tactics during the Civil Rights Movement, encouraged in part by a tweet from the John F. Kennedy Library Foundation in Boston showing a newspaper bearing the headline, “Negro Family On Way Here.” The foundation added as a caption:

The “Reverse Freedom Rides” themselves did happen; as NPR reported in 2020:

Fuming over the civil rights movement, Southern segregationists had concocted a way to retaliate against Northern liberals. In 1962, they tricked about 200 African Americans from the South into moving north. The idea was simple: When large numbers of African Americans showed up on Northern doorsteps, Northerners would not be able to accommodate them. They would not want them, and their hypocrisy would be exposed.

The Reverse Freedom Rides have largely disappeared from the country’s collective memory. The scheme almost never appears in history books and is little-known even in Hyannis, the primary target of the ploy.

Self and other attorneys assisting the group of migrants stranded in Massachusetts said they would pursue legal options against the people responsible for shipping them out of Texas.

“Using human beings – families and children – as political pawns says far more about Governor DeSantis’ callousness and disregard for human life than it does about the people of Martha’s Vineyard,” she said. “He sent those planes here hoping to expose hypocrisy; he does not believe anyone when they say they care about people like migrants fleeing an oppressive socialist regime in Venezuela, because he himself cannot conceive of caring about them. He’s made it perfectly clear he views them as subhuman.”

Meanwhile, after receiving not just legal help from Help and her fellow attorneys but shelter and food from local volunteers, Massachusetts Gov. Charlie Baker announced that the group would be relocated to Joint Base Cape Cod to continue receiving services.

We emailed DHS seeking comment but have not yet heard back.

Update 9/19/2022, 11:11 a.m. PST: Updated to add photograph of a brochure reportedly provided to the migrant group, which included disinformation on benefits promised to them. — ag
Update 10/02/2022, 10:00 PST: Updated to reflect identification of the operative who convinced asylum seekers to be taken to Martha’s Vineyard. — ag