In May 2021, Seattle business owner Dan Price tweeted about Millennials share of wealth (purportedly 4.8 percent) versus that of Generation X (Gen X, 9 percent), and Baby Boomers (21 percent) “at the same age”:

Millennials hold 4.8% of all wealth. There are now 40-year-old Millennials.

The largest generation in history did what the system told them to do and became the most-educated in history. Now they're the poorest in history

Price did not include a link to any information substantiating the claims in his tweet. The question involved a few moving parts, so we will address them each individually.

Who is Dan Price, and Why is He Saying This?

Dan Price is an outspoken, Seattle-based business owner who came to widespread recognition when he raised the minimum wage at his payment processing company Gravity Payments in 2015.

An October 2015 Inc.com profile of Price (“Here’s What Really Happened at That Company That Set a $70,000 Minimum Wage[:] Dan Price decided to pay all 120 employees at least $70,000. Grown men cried. Profits soared. Then things got really crazy”) provided background on the evolution of compensation at Gravity Payments:

Before Dan Price caused a media firestorm by establishing a $70,000 minimum wage at his Seattle company, Gravity Payments… before Hollywood agents, reality-show producers, and book publishers began throwing elbows for a piece of the hip, 31-year-old entrepreneur with the shoulder-length hair and Brad Pitt looks… before Rush Limbaugh called him a socialist and Harvard Business School professors asked to study his radical experiment in paying workers… an entry-level Gravity employee named Jason Haley got really pissed off at him.

It was late 2011. Haley was a 32-year-old phone tech earning about $35,000 a year, and he was in a sour mood. Price had noticed it, and when he spotted Haley outside on a smoking break, he approached. “Seems like something’s bothering you,” he said. “What’s on your mind?”

“You’re ripping me off,” Haley told him.

Price was taken aback. Haley is shy, not prone to outbursts. “Your pay is based on market rates,” Price said. “If you have different data, please let me know. I have no intention of ripping you off.” The data doesn’t matter, Haley responded: “I know your intentions are bad. You brag about how financially disciplined you are, but that just translates into me not making enough money to lead a decent life.”

Price walked away, shocked and hurt. For three days, he groused about the encounter to family and friends. “I felt horrible,” he says. “Like a victim.” An entrepreneur since he was a teen, Price prided himself on treating employees well at Gravity, which he co-founded in 2004 with his brother Lucas Price. Three years before, as a 16-year-old high school kid, Dan Price saw bar owners being gouged by big financial firms every time they swiped a patron’s credit card. By first outsourcing technology, and then building its own systems, Gravity offered lower prices and better service, and grew rapidly for four years — until the Great Recession nearly wiped it out. Traumatized, Price kept a lid on wages even after the economy recovered — to save the company, of course! Why can’t employees see that? Yet the more people tried to cheer him up about his wage policy, the worse Price felt.

This spring [of 2015], [PRice] spent two weeks running the numbers and battling insomnia before making a dramatic announcement to his 120-member staff on April 13 [2015], inviting NBC News and The New York Times to cover it: Over the next three years, he [would] phase in a minimum wage of $70,000 at Gravity and immediately cut his own salary from $1.1 million to $70,000 to help fund it.

Price’s May 12 2021 tweet claimed that that the Millennial generation held 4.8 percent of wealth; a quick Google search returned a slightly different number as of October 2020: 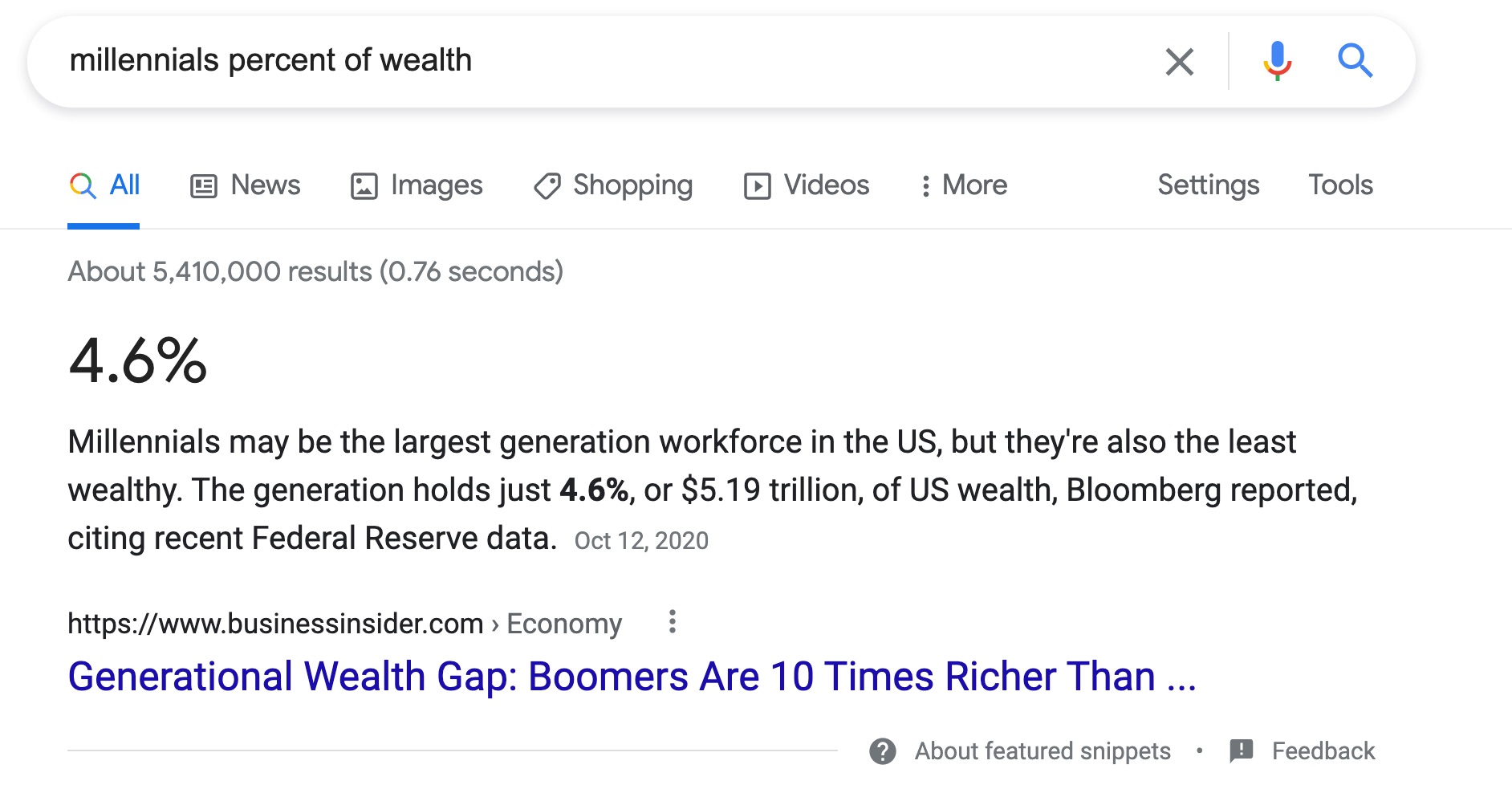 That Google “Featured Snippet” linked to an October 12 2020 BusinessInsider.com article (archived), which was prefaced with three bullet points:

The body of the article began:

Millennials may be the largest generation workforce in the US, but they’re also the least wealthy.

Price referenced various generations at the “same age,” verbiage that was not well-suited to Twitter’s character limits. The excerpted article was a bit more descriptive, explaining:

But historical trends indicate that the wealth gap shouldn’t be this big. When boomers were millennials’ age in 1989, according to the Fed data, they held 21.3% of US wealth. That’s four times the 4.6% that millennials hold today.

[A] chart below, which highlights the percentage of US wealth held by age, shows that younger Americans are financially behind and their wealth levels are below where they should be.

BusinessInsider.com referenced an October 8 2020 Bloomberg.com piece, which referenced then-recent data compiled by the Federal Reserve. However, the headline (and focus) were slightly different: “The 50 Richest Americans Are Worth as Much as the Poorest 165 Million.”

On October 9 2020, financial news site CNBC‘s “Millennials own less than 5% of all U.S. wealth” utilized the same “at the same age” phrasing seen in Price’s May 2021 tweet:

Despite making up the largest portion of the workforce, millennials controlled just 4.6% of U.S. wealth through the first half of 2020, according to data from the Federal Reserve.

Baby boomers control over 53% of the country’s wealth, while Gen X accounts for just over 25% and the silent generation holds around 17%, according to the Fed’s data, which breaks down U.S. wealth in the beginning of 2020 by age, class and race.

While it’s not abnormal for older generations to be wealthier than younger generations — they have had longer to earn money and accumulate assets, after all — the Fed’s data also shows that millennials have far less wealth than boomers did at the same age.

In 1989, when baby boomers were around the same age as millennials are today, they controlled 21% of the nation’s wealth. That’s almost five times as much as what millennials own today.

Many of those pieces linked to “Federal Reserve data,” with links pointing to a table at FederalReserve.gov with the title, “Distribution of Household Wealth in the U.S. since 1989.” That table included a 4.6 percent share of wealth for Millennials for the third fiscal quarter of 2020; when updated with data for the fourth quarter (Q4), the percentage ticked up from 4.6 percent to 4.8 percent — as noted in Price’s tweet.

In the CNBC excerpt above, the outlet noted that “in 1989 … [Boomers] controlled 21% of the nation’s wealth,” amounting to “almost five times as much as what millennials own today.” By default, 1989 was the first available data year on that chart.

Dan Price’s May 12 2021 tweet claimed that “Millennials hold 4.8% of all wealth,” whereas at the “same age, Gen X had 9% of wealth,” and “Boomers had 21%.” In October 2020, financial and business outlets reported figures close to that range, matching Federal Reserve data for Q3 of 2020. When data for Q4 appeared, Millennials controlled 4.8 percent of wealth — the figure cited by Price in his tweet.