On November 16 2021, an Imgur user shared the following screenshot about Minnesota’s “insulin access law,” in a post with the title, “Big Pharma has to be taken down a peg or 10”: 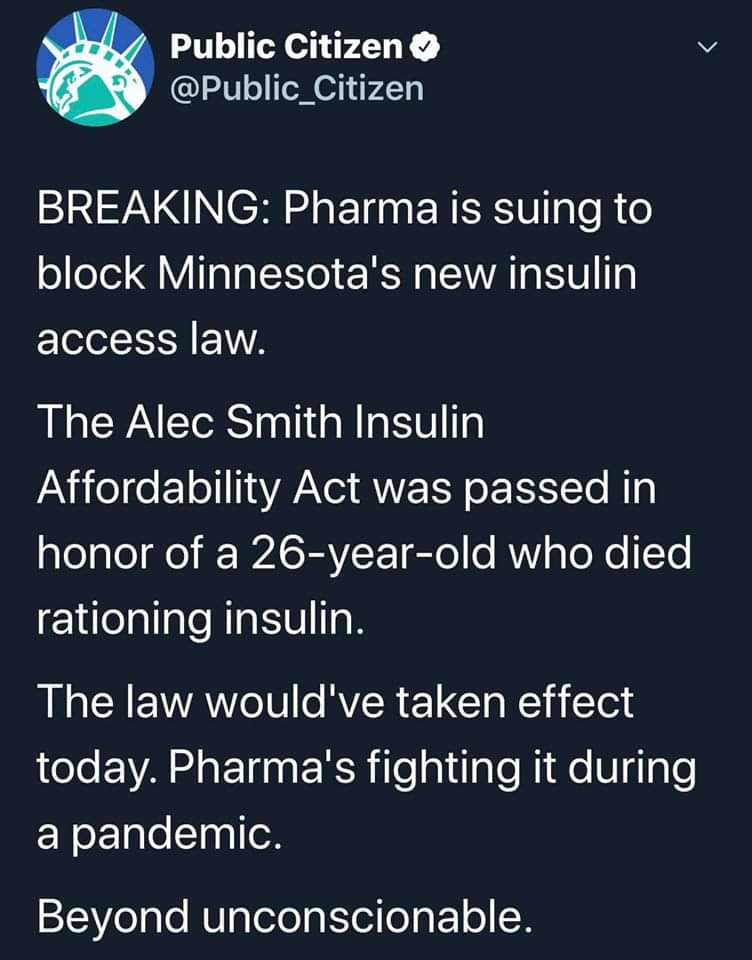 The Alec Smith Insulin Affordability Act was passed in honor of a 26-year-old who died rationing insulin.

The law would’ve taken effect today. Pharma’s fighting it during a pandemic.

That tweet was real, but not from November 2021, and it included a screenshot of a legal motion [PDF] filed against MNSure (Minnesota’s ACA marketplace) by Pharmaceutical Research and Manufacturers of America (‘PhRMA’) on June 30 2020:

1. In the newly enacted Alec Smith Insulin Affordability Act (the “Act”), Minnesota chose to address a matter of public concern in an unconstitutional way […]

It was originally tweeted on July 1 2020, followed by a related tweet from the same account on the same day:

The Alec Smith Insulin Affordability Act was passed in honor of a 26-year-old who died rationing insulin.

The law would've taken effect today. Pharma's fighting it during a pandemic.

It worked. Minnesota passed an insulin access law in her son's honor. It goes into effect today.

Pharma just sued to block it.

As such, the tweet did accurately describe events — but which took place in late June and early July 2020, more than a year prior to the Imgur post. One of the first few comments, from u/ruint, asserted that the content was outdated, and that the motion had been dismissed:

We visited the link, a March 15 2021 statement on the website of Minnesota Attorney General (AG) Keith Ellison. That statement was titled “‘No one should have to choose between affording their lives and affording to live’: AG Ellison, Governor Walz celebrate dismissal of challenge to Alec Smith Insulin Affordability Act.”

As the comment indicated, the referenced lawsuit was dismissed, and the Alec Smith Insulin Affordability Act “became law.” The statement provided background about Smith’s preventible death:

“No one should have to choose between affording their lives and affording to live. The legislature passed the Alec Smith Insulin Affordability Act so that no Minnesotan would have to die like Alec did when he could not afford the medication that kept him alive. I’m gratified the court saw through Big Pharma’s meritless challenge to the law and dismissed the case.”

“I met Alec’s fearless mother, Nicole Smith-Holt, almost 3 years ago. Barely a day goes by that I don’t think of the story she told me of Alec’s needless, tragic death. And barely a day goes by when I don’t admire the fight that Nicole took on to make sure that no other Minnesota family ever suffers a loss like hers. She channeled her mother’s grief over losing her son into saving the lives of sons and daughters and mothers and fathers in every corner of Minnesota. This win today is her win.”

When Minneapolis resident Alec Smith aged off his mother’s health insurance, he started to ration his insulin because he could not afford it on his restaurant manager salary. As a result of rationing his insulin, he died in 2017 of ketoacidosis at age 26.

Ellison’s statement attributed the passage of the bill into law to “the tireless advocacy of Alec’s family and the families of other victims of insulin price hikes,” adding:

Under the law, eligible individuals in urgent need of insulin can go to their pharmacy once in a 12-month period and receive a one-time, 30-day supply of insulin for a $35 co-pay. The long-term program requires manufacturers to provide insulin to eligible individuals for up to one year, available in 90-day increments for a co-pay of no more than $50. Manufacturers must reimburse pharmacies for the insulin they dispense or send them replacement insulin at no cost.

The challenge, brought by a lobbying group for pharmaceutical manufacturers, asked the Court to halt the program and strike down the law under the Takings Clause of the Constitution. Today, the court dismissed the lawsuit and held that Big Pharma could not assert the Takings Clause to seek an injunction halting the program.

According to a recent report by the Minnesota Board of Pharmacy Alec’s Law has already helped 465 Minnesotans access affordable insulin. With the dismissal of this challenge, the program can continue to protect Minnesotans with diabetes and ensure they have access to life-maintaining medicine.

A November 2021 Imgur screenshot of a July 2020 @Public_Citizen tweet, asserting in part that “Pharma is suing to block Minnesota’s new insulin access law,” and that the Alec Smith Insulin Affordability Act was to honor a 26-year-old who died rationing insulin. Both statements were accurate at the time the tweet was published, on July 1 2020. On March 15 2021, AG Ellison announced that the court had dismissed a lawsuit filed by Pharmaceutical Research and Manufacturers of America (“PhRMA”) challenging the Alec Smith Insulin Affordability Act. In the statement, the Minnesota Board of Pharmacy noted, “Minnesotans can continue receiving insulin through the program, rather than having to ration insulin or going without it entirely.”