Mitt Romney was invited by President-Elect Joe Biden to head the Health and Human Services Department.

On November 9 2020, Daily Wire appeared to publish (and then delete) an article headlined, “Mitt Romney Asked To Lead Health And Human Services In Biden Administration: Report”:

Clicking through to both the link as well as Google’s cache led to a 404 “Error” page; neither archive.is nor web.archive.org retained a copy of the content once hosted at dailywire.com/news/mitt-romney-asked-to-lead-health-and-human-services-in-biden-administration-report. However, in addition to tweets, the deleted post survived in initial Google search results (minus working cached copies): 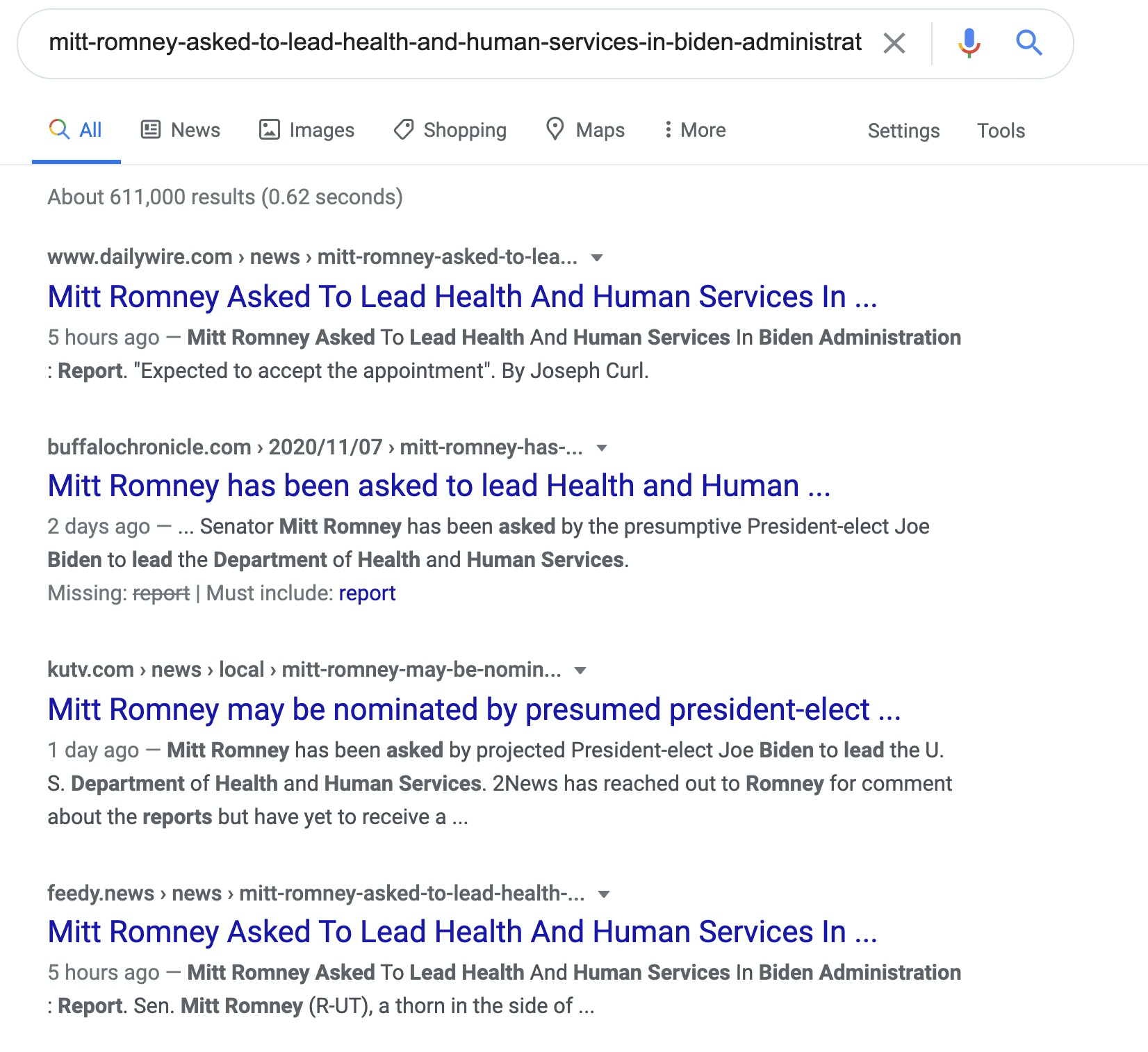 Daily Wire’s aggregated, deleted post also lived on via Flipboard.com (archived), and a partial preview was available there:

Sen. Mitt Romney (R-UT), a thorn in the side of President Trump for much of the last four years, has reportedly been asked by Joe Biden to lead the …

On Facebook, Ben Shapiro shared and later deleted a link to the Daily Wire story: 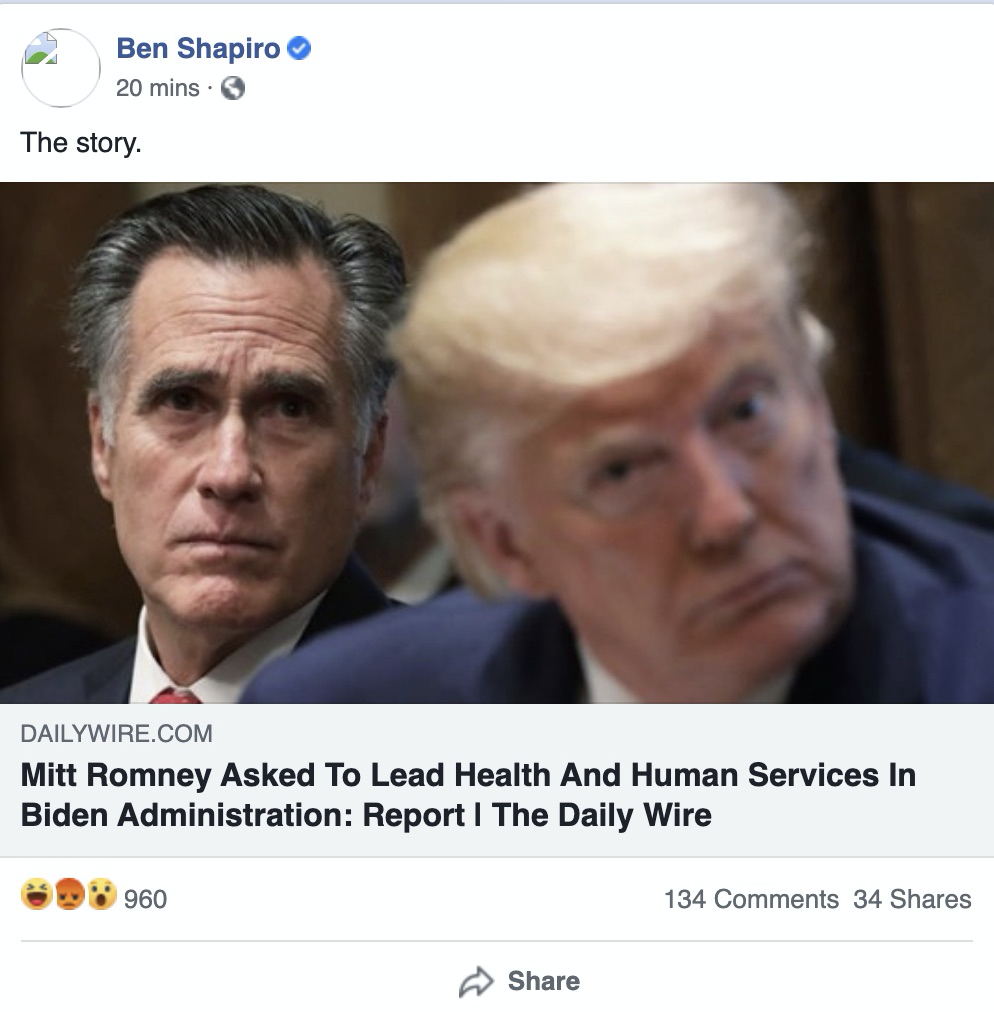 Third on the list was a post on KUTV.com, whose post also appeared to have been hastily deleted. That page partly survived in Google’s cache; we archived it here. The story, which was dated November 8 2020, cited “The Buffalo Chronicle” as a source:

KUTV — Published accounts are reporting Sen. Mitt Romney has been asked by projected President-elect Joe Biden to lead the U.S. Department of Health and Human Services.

2News has reached out to Romney for comment about the reports but have yet to receive a response. However, The Buffalo Chronicle stated in an article that Romney is mulling over the nomination with his family. The reports also stated that he is expected to accept the appointment.

As noted on the deleted KUTV.com page, the claim appeared to originate on November 7 2020 via the site BuffaloChronicle.com. In a post titled “Mitt Romney has been asked to lead Health and Human Services in Biden administration,” BuffaloChronicle.com claimed:

Sources are telling The Chronicle that Senator Mitt Romney has been asked by the presumptive President-elect Joe Biden to lead the Department of Health and Human Services. He is currently discussing the nomination with his family and is expected to accept the appointment.

Biden advisors expect that Romney — a former management consultant by training and a former CEO of Bain Capital — will be tasked with making the national healthcare system more affordable without legislation that modifies the Affordable Care Act.

That work is expected to focus on a massive transition to tele-health services, expansion of digital appointment scheduling, expanded access to pharmaceuticals online, and the development of artificial intelligence technologies that will automate patient intake processing, make screening recommendations, and seamlessly sync medical record access between multiple providers serving a single patient.

In October 2019, BuffaloChronicle.com published a false claim about Sen. Elizabeth Warren, in an article headlined “Ty Whelly, former Marine, says Elizabeth Warren paid him for sex.” The story reported the baseless claim that Warren has sexual encounters with Whelly, through an escort service — a claim Whelly made in early October in a press conference held by a right-wing conspiracy theorist, Jacob Wohl. Wohl has repeatedly leveled allegations of sexual assault or affairs against his political enemies, including former special counsel Robert Mueller, Mayor Pete Buttigieg, and Sen. Kamala Harris.

Media Bias/Fact Check also described multiple issues with the site, and its tendency not to correct false information if it attracts an audience.

On November 9 2020, the Daily Wire published and deleted an item titled “‘Mitt Romney Asked To Lead Health And Human Services In Biden Administration: Report'”; KUTV.com appeared to have done the same. Both articles emerged and were likely sourced from a suspicious story initially shared on November 7 2020 by BuffaloChronicle.com, a known purveyor of disinformation.