Brazilian President Jair Bolsonaro has been briefed on the possibility that U.S. President Donald Trump may call on him for military intervention.

A right-wing group based out of San Diego State University in California stoked more conspiracy theories around the 2020 U.S. presidential elections on Twitter, claiming that troops and operatives from other governments may get involved on behalf of incumbent President Donald Trump. 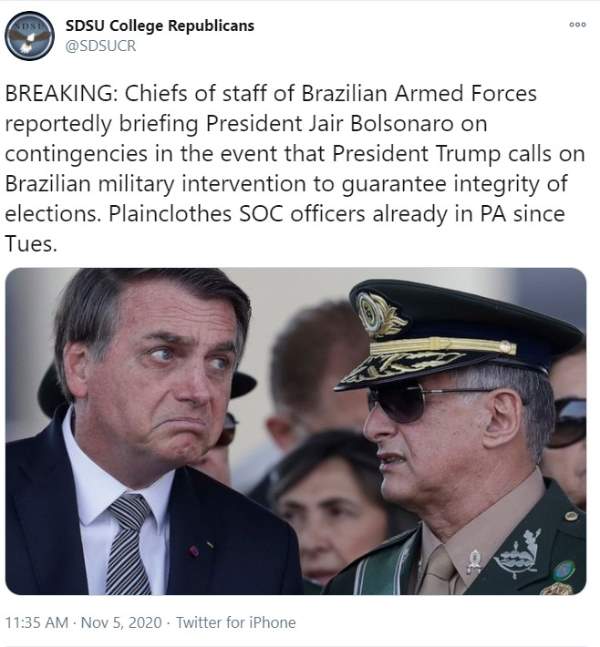 There has been no evidence of looming Brazilian efforts to intervene on behalf of Trump, who lost the presidential election to Democratic nominee Joe Biden; according to the Washington Post, the Brazilian president did not express any opposition to his American ally’s loss.

The group further claimed that Polish special mission units and volunteers belonging to the far-right Lega Nord party in Italy were also being tasked with finding “sources of fraud ballots.” When others asked the group for a source, the account refused, instead doubling down and saying, “Source: Just trust us.”

We contacted both Twitter and the university seeking comment on the group’s claims, but we did not receive a response.

In May 2020 the group was one of thirty student Republican groups that signed on to a letter from a nationalist and anti-immigrant “think tank” called the Federation for American Immigration Reform (FAIR), calling on the Trump administration to suspend the federal H-1B worker visa program. As the Southern Poverty Law Center has reported, FAIR’s posturing as an immigration group hides “much ugliness”:

FAIR leaders have ties to white supremacist groups and eugenicists and have made many racist statements. Its advertisements have been rejected because of racist content. FAIR’s founder, John Tanton, has expressed his wish that America remain a majority-white population: a goal to be achieved, presumably, by limiting the number of nonwhites who enter the country. One of the group’s main goals is upending the Immigration and Nationality Act of 1965, which ended a decades-long, racist quota system that limited immigration mostly to northern Europeans. FAIR President Dan Stein has called the Act a “mistake.”

The SDSU group’s president, Oliver Krvaric, subsequently said in a July 2020 op-ed for the local San Diego Union-Tribune newspaper that he believed “nationalist Republicans” were in the best position to carry the party forward after Trump’s presidency. He wrote:

I hope to see the Republican Party continue to pivot towards what some are calling “national conservatism.” Economic nationalism, defense of the traditional family, a commitment to the nation-state model, reverence for our history, and an effort to uphold our national and cultural identity all have their place in a revived Republican platform, and the SDSU College Republicans will proudly help lead the way.

Krvaric’s father, outgoing San Diego Republican Party chair Tony Krvaric, drew local attention around that time after a video surfaced of himself surrounded by Nazi iconography. The video was made in Sweden in the late 1980s, before the elder Krvaric emigrated to the U.S.

Tony Krvaric later denied that he was directly involved with making the video.

“For the record, any Nazi imagery is disgusting. I didn’t create the computer animation, didn’t choose the graphics, and I obviously don’t support anything like that,” he said.

The station also reported that another son of Tony Krvaric (not the one who defended nationalism in an op-ed) had associated himself with the white nationalist group the “Groyper Army”:

The Groyper Army, which uses a similar cartoon frog as its symbol, is fighting a “war” with mainstream conservatives to move them further to the right.

“They advocate for white America,” said McElroy, the civil rights attorney. “They advocate for the end of all immigration whatsoever. They say, `we’re losing our cultural identity and heritage,’ which for some reason, they don’t believe includes people of color but only white, Aryan, Europe-based people.”

The release of the Nazi-themed video came shortly after the elder Krvaric announced he would retire from the party chairman position. Since then, local Democrats gained an 8-1 majority on the city council in the November 2020 elections, as well as a projected majority on the county board of supervisors. Additionally, the mayoral election was contested between two Democratic candidates, Barbara Bry and Todd Gloria after both qualified for a runoff, which no Republican candidate managed to do.

However, the prospect of a right-wing coup attempt in Brazil became much more tangible in September 2021, as Bolsonaro was set to join a “protest” by his followers calling for the removal of that country’s Supreme Court.

The connection between Bolsonaro and the right-wing operatives that enabled a similar attack in the U.S. was compounded by the Brazilian president’s son, Eduardo Bolsonaro, being endorsed by white nationalist Steve Bannon:

It was a pleasure to meet STEVE BANNON,strategist in Donald Trump's presidential campaign.We had a great conversation and we share the same worldview.He said be an enthusiast of Bolsonaro's campaign and we are certainly in touch to join forces,especially against cultural marxism. pic.twitter.com/ceHoui6FH5

Another Trump operative, Jason Miller, was detained by Brazilian authorities amid the September 7, 2021 gathering.

“We were not accused of any wrongdoing, and told only that they ‘wanted to talk,'” Miller claimed in a statement. “We informed them that we had nothing to say and were eventually released to fly back to the United States.”