After the 2020 election was “called” with former United States Vice President Joe Biden as victor, a rumor circulated that a website called RealClearPolitics had “rescinded” Pennsylvania, effectively undoing Biden’s win:

RealClearPolitics has rescinded its call for Biden winning Pennsylvania.

This election is not over.

In the above November 9 2020 tweet, political activist Scott Presler wrote:

RealClearPolitics has rescinded its call for Biden winning Pennsylvania.

This election is not over.

Presler’s claim was not unique in terms of rumors that U.S. President Donald Trump, facing a resounding 2020 loss, was still in the game, so to speak. A previous rumor maintained that ballots secretly watermarked by the Department of Homeland Security would reveal fraudulent votes, and then another circulating claim held that Biden’s win violated “Benford’s Law.” (Neither claim had a meaningful effect on the post-election discourse, and neither was valid.)

Of those terms, the fifth most popular had to do with far right propaganda site (and channel) NewsMax; we also found aggregated content on the soundalike “Newsbreak app,” which we have come across before, thanks to its tendency to spread false information. Searches for “NewsMax” and “RealClearPolitics rescinds Pennsylvania” pointed to that easy-to-misidentify site, which aggregated an article with the following headline:

Newsbreak pulled the content from a site called TampaFP.com, whose “About Us” page indicated that the site was a months-old blog:

Soft-launched in April 2020, at the COVID-19 growth cycle, The Free Press continues its digital growth with reach in 36 countries, and primary reach in the Tampa DMA at 97%.

“Any headline that ends in a question mark can be answered by the word no.”

What Does It Mean to ‘Call’ an Election?

The media’s “call” of Biden as the winner doesn’t hold force of law. It’s simply the best estimation by the networks’ data-crunchers.

Specifically, media “decision desks” look at the votes that have been counted in the states and what remains to be counted. They announce a “call” whenever they think the trailing candidate has run out of ways to add enough votes to win.

The media’s call carries weight in public perceptions of who has won, and it can prompt a candidate to declare victory or the trailing candidate to concede, which can further shape perceptions. If there’s a switch in the party occupying the White House, the call could accelerate the transition process.

States (including Pennsylvania) were left to certify their tallies after votes had been counted and reported:

Federal law allows states more than a month after the election to finalize the results. This year, that “safe harbor” date is Dec. 8 [2020]. This leaves time for election officials to determine whether provisional ballots are valid. And in many states, overseas military ballots are given a grace period to arrive late.

By Dec. 8 [2020], if states have wrapped up the certification of their results, Congress pledges not to dispute the results. However, there’s some legal ambiguity there, legal experts say.

Reuters reported on November 10 2020 that the Trump administration filed a lawsuit to prevent Pennsylvania from certifying their results:

The lawsuit, brought by the campaign and two registered voters, alleged Pennsylvania’s mail-in voting system “lacked all of the hallmarks of transparency and verifiability that were present for in-person voters.”

The lawsuit claims Pennsylvania officials violated the U.S. Constitution by creating “an illegal two-tiered voting system” where voting in-person was subject to more oversight than voting by mail.

It was filed against Pennsylvania Secretary of State Kathy Boockvar and the boards of elections in Democratic-leaning counties that include Philadelphia and Pittsburgh. Bookcvar’s office did not immediately respond to a request for comment.

President Donald Trump’s campaign launched its broadest challenge yet to the results of the election that appears destined to push him from office, accusing Pennsylvania officials of running a “two-tiered” voting system – in-person and mail – that violates the U.S. Constitution.

Legal experts said the case has little chance of succeeding, for a variety of reasons: Courts are wary of invalidating legally cast ballots. The issues raised, even if true, don’t represent a constitutional question. And mail voting, used in many states, is both common and constitutional.

The suit has “lots of complaints about different things, and it’s not easy to see how they all fit together,” said Kermit Roosevelt, a professor at the University of Pennsylvania Law School who focuses on constitutional law.

“This has a very ‘throw it all at the wall and see what sticks’ feel,” he said.

One of the nine experts pointed to the Trump administrations efforts outside Pennsylvania to sow doubts around the final tally:

David Becker, executive director and founder of the Center for Election Innovation and Research, said the Trump campaign “continues to spread lies about transparency of this process and the access to observers. Trump campaign observers and Republican Party observers were present at every moment that every ballot was considered in Pennsylvania.”

He said the Trump campaign admitted as much in a hearing before a federal judge [in early November 2020], when a lawyer said there were “a non-zero number” of observers from the campaign present during ballot counting in Philadelphia.

Pennsylvania Attorney General Josh Shapiro called the suit “meritless” and said the election was “overseen by bipartisan election officials and was lawful, fair and secure.”

Who Called the Election, Anyway?

At first glance, it might seem that if any one entity “called” the 2020 election, a separate entity “rescinding” Pennsylvania was surely as valid — which disinformation purveyors clearly know and are playing upon in order to interfere with the U.S. election.

On November 7 2020, the Los Angeles Times addressed who “called” the election for Biden, and how his win was ascertained:

The waiting was the hardest part. But the TV networks finally got to the end of the 2020 road to the White House on Saturday morning [November 7 2020].

Nearly four days after the final votes were cast [on November 3 2020], the cable news networks and broadcast news divisions called Joe Biden the winner over President Trump in rapid fire fashion within a 16-minute window that began at 11:24 a.m. Eastern [on November 7 2020].

The Associated Press and Fox News, which collaborate in their voter survey data, came in slightly later, with AP calling it at 11:28 and Fox News at 11:40. The slight delay at Fox News had to do with its decision desk — the analysts who determine when a state can be called — which was looking at different data than the other networks.

Fox News also called Pennsylvania and Nevada for Biden, simultaneously putting him at a higher number of electoral votes — 290 — than other outlets. The network had also called Arizona for Biden. The state has not been included in the totals on the other networks, which have the president-elect at between 273 and 279 electoral votes.

The chain of events described by the Los Angeles Times led to a very widely viewed video and quoted moment involving Trump surrogate Rudy Giuliani, who was at the time speaking in the parking lot of Four Seasons Total Landscaping near Philadelphia. Giuliani was informed the election was called for Biden, and asked which network made that call.

In response, someone said “all of them,” and Giuliani addressed it:

Rudy Giuliani: "Who was it called by?"

Media: "All of networks."

Rudy Giuliani: "All the networks!" pic.twitter.com/TXjreOmrAh

Google’s election information page credited Associated Press with calling the 2020 election; for its part, AP provided in-depth answers about how any election is “called” here.

Google’s most updated results for the electoral count on the afternoon of November 10 2020 indicated Biden had 290 votes of the 270 needed to win, while Trump received 214: 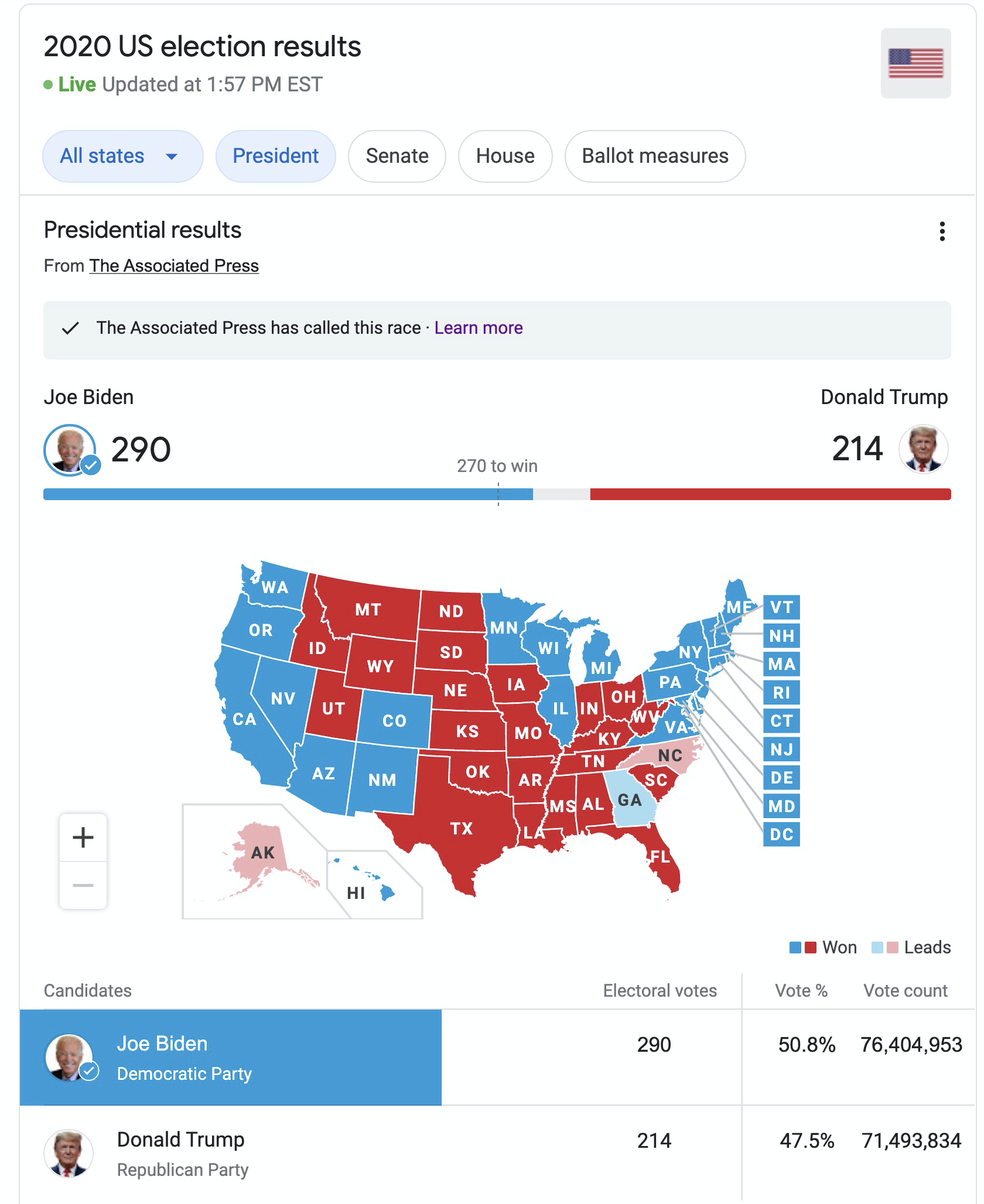 So Did RealClearPolitics ‘Rescind’ Pennsylvania and ‘Uncall’ the Election? 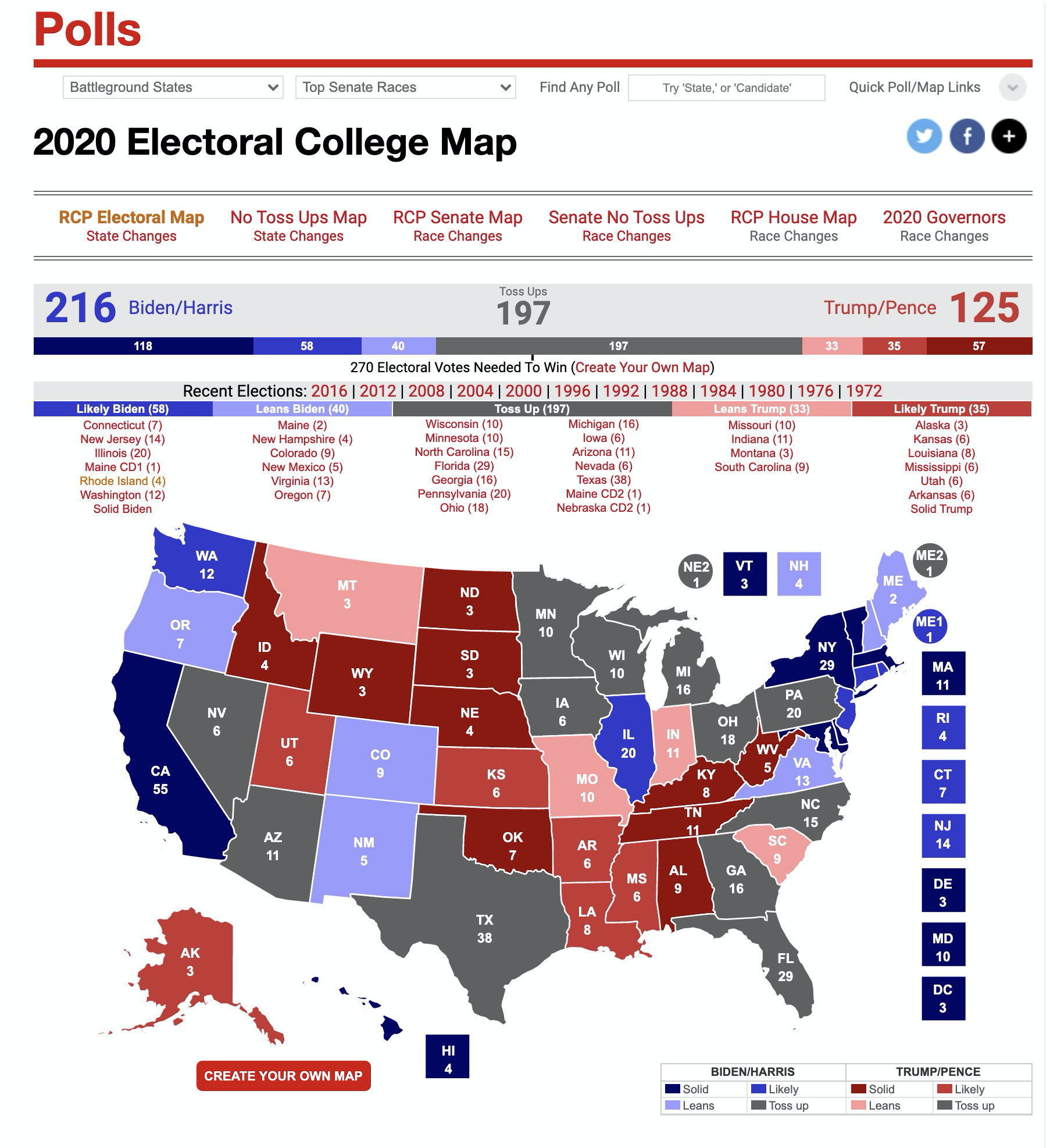 Although RealClearPolitics counted only 216 electoral votes for Biden, short of the 270 needed to win, it also only credited Trump with 125 electoral votes; Biden was still leading in that count. A remaining 197 electoral votes were listed under “Toss Ups,” and from west to east, the following states remained unallocated:

At least two states with divided electoral votes were “called” but retained grey districts: Maine and Nebraska. RealClearPolitics appeared to refrain from allocating votes from swing states, even in instances (like Florida) where those states maintained largely uncontested results.

RealClearPolitics further refrained from allocating votes in eleven states other than Pennsylvania; focusing solely on its decision not to allocate Pennsylvania falsely implied that only Pennsylvania was affected in the site’s November 9 and 10 2020 Electoral College Map.

Real Clear Politics just took PA away from Biden and made it a toss up.

Only the beginning please look beyond the Big Media censorship to watch it all change.

Bevan said “this is false,” and added that RealClearPolitics did not “rescind” Pennsylvania:

This is false. We never called Pennsylvania, and nothing has changed. https://t.co/YXZ1PjI7Ud

A viral claim held that RealClearPolitics “rescinded” Pennsylvania, recalling its 20 electoral votes back into play and “uncalling” the election. As Bevan explained, RealClearPolitics had never called Pennsylvania in the first place, and as RealClearPolitics’ 2020 Electoral Votes Map showed, twelve states remained “uncalled” on its site. While the site hadn’t awarded 270 votes to either candidate, it had Biden leading Trump at 216 to 125. Even if Pennsylvania was likely to be “rescinded” (and there was no evidence to support that claim), Biden still had the 270 votes needed to win.