These claims were presented in a “just asking questions” format (also known as JAQing off), presupposing that Democrats had somehow managed to successfully insert enough “counterfeit ballots” (and constituting a cross-country conspiracy to commit election fraud) to try to “steal” the election from U.S. President Donald Trump.

The user advised others to “consider” that the Department of Homeland Security (and/or the entire United States military) were executing a “sting” operation, using “non-radioactive isotope watermarks” to separate the election-tipping fraudulent ballots from real ones:

A second tweet provided a “source” for the claims about “special paper” or “watermarked ballots,” QAnon:

A few tweets later, @jdburney1 appeared to address the obvious question of why more proactive countermeasures would not  have been taken, such as preventing fraudulent ballots from being counted across several days in the first place:

The whole point of a “STING” is to NOT reveal your countermeasure.

DHS controls. Planned in advance. Identify the fraudsters, and prosecute (many indictments coming).

Iterations of the claim were shared to Facebook (archived), and predictably the claim was popular on 4Chan’s /pol/, where one such post repeated it alongside a screenshot of the tweets:

IT REALLY IS A STING OPERATION !!!!
DEMS ARE SCREWED

Users were divided over the claim’s legitimacy:

FLASE FLAG BULLSHIT. No one needed to print phony ballots. There were literally millions of them in circulation.

Among comments was a screenshot that was also circulating on other platforms on its own, showing an unknown document bearing text reading, “DHS Announces Election Audit Sting After Contentious U.S. Election Sparks Confusion and Outrage From Election Skeptics”: 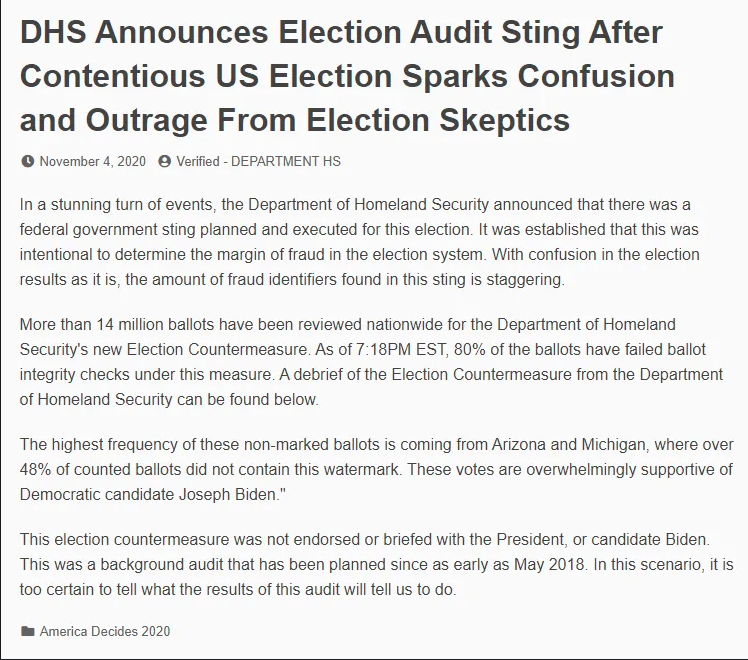 Although that screenshot was everywhere and it was formatted to look like a news article, it had no clear source, no citation, and no link. The only other iterations we found of the text appeared on message boards, and no one seemed to know its source.

We were finally able to find the apparent origin of this screenshot, which was the website treeofliberty.me. The account that originally shared it claimed, dubiously, to have found it through the news wire service Associated Press. In large print, in a post titled “Mainstream Is Censoring This AP OneWire Press Release About Obvious Election Fraud, So I Am Leaking It,” the page stated that an anonymous person decided to “leak” the screenshot, and in very tiny print underneath the image was the following text:

At this time, this press release was leaked by me, and I was able to view it through very questionable means. It remains viewed, but not unlocked.

Even without taking into consideration the obvious grammar and punctuation errors, the lack of official letterhead, and the laughable claim that “the media” was censoring a press release,  which has “press” right in the name, we’re not certain how the Department of Homeland Security would have been prevented by any journalist at all from putting up a document on its own website.

According to Media Matters For America, the “sting” claim was especially popular on TikTok, adding that it had originated with a “Q drop” from early in 2018:

The conspiracy theory originated from a Q drop posted in February 2018 that said “watch the water.” “Q drops” are messages the central figure of the QAnon conspiracy theory, known as “Q,” posts on an internet message board for followers.

Watermarks do exist on some ballots, such as those in California, but there is no evidence that DHS has secretly watermarked ballots in order to entrap cheaters. Likewise, there is no evidence of widespread voter fraud being committed during the 2020 presidential election, despite claims from right-wing media and Trump and his allies. The federal government also does not create ballots; states and local governments do, with approval from the U.S. Postal Service for designs of those sent by mail.

Other iterations of this claim relied heavily on a so-called “secret” document (which is publicly available) that was touted as “proof” of the secret tracking watermarks, which was actually a memo put out by California’s secretary of state:

Pursuant to Elections Code section 13002 and the California Code of Regulations, Title 2, section 20215, 20218, and 20280, the Secretary of State’s office has selected a design and color combination for use in the November 3, 2020, General Election.

The watermark for the November 3, 2020, General Election, is the CA Poppy. The tint for the background and watermark is Red PMS 192.

The watermark and tint must appear on the ballot itself, not only on the stub.

This is the text of California Elections Code, section 13002:

Ballot paper and ballot cards used by a jurisdiction holding an election pursuant to the laws of California shall be tinted and watermarked or overprinted with a design, to be furnished by the Secretary of State, so that the watermark or overprint is plainly discernible.

The other relevant codes can be found in their entirety here. This is to prevent election and voter fraud, and it is neither new, nor is it evidence of any sort of widespread sting attempt. 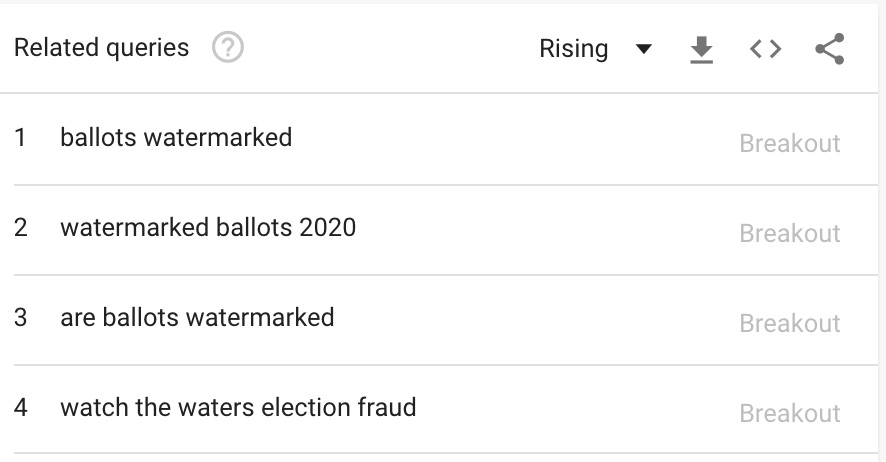 As of November 5 2020, iterations of the “watermarked ballots” conspiracy were rampant on Twitter, TikTok, Facebook, and 4Chan — many hinging largely on what an anonymous poster asserted was a suppressed Associated Press press release; the only iterations of that press release we found were located on conspiracy sites. Claims made by @jdburney1 and others sharing them were large ones, alleging widespread falsification of ballots. As of November 5 2020, no evidence of any such tampering existed — and a whole lot of evidence to the contrary showed that there is no media suppression of press releases, no secret false ballots, and no sting operation orchestrated upon voters by the Department of Homeland Security.

Finally, even if any of this was true — which it isn’t — and a whistleblower was to release shocking, widely suppressed information about an ongoing vote count in a hotly contested presidential election, there is very little probability that it would be on a website TreeOfLiberty.me, which advertises itself on the bottom of its front page as “The Boogaloo Movement’s Press Platform.”