MSNBC correspondent Gadi Schwartz said that workers at a Reno, Nevada caucus site decided that "ace is the low card," contradicting prior reporting saying that aces were the high card in the event of a tiebreaker.

As media coverage on February 22, 2020 converged on the Nevada State Democratic Party caucuses and their unusual tiebreaker method, MSNBC reporter Gadi Schwartz revealed an apparent rule change on-air that contradicted not only state policy but his network’s own reporting.

In a live on-air report, Schwartz said, “They just decided that ace is [the] low card” prior to one drawing to decide a tie between South Bend, Indiana Mayor Pete Buttigieg and Sen. Bernie Sanders of Vermont:

WATCH: @GadiNBC shows a tie break just now with cards at a #NevadaCaucus in Reno. pic.twitter.com/z81wpXmqXq

At the time, some viewers claimed that he drew an ace. But the footage shows a caucus worker saying that the senator drew a 2 of clubs, compared to a 3 of an unintelligible suit for Buttigieg. (Ultimately, Sanders would go on to win the caucuses.)

During a follow-up interview with anchor Brian Williams, however, Schwartz did not offer any details behind the site workers’ decision. Instead he repeated,”they decided it here; the caucus decided on the spot that aces would be low.”

Schwartz did not explain why the workers went against the rules that had been reported leading up to the actual caucuses. Schwartz’s colleague Garrett Haake said in a a story that aces were actually considered the high card in the event of a tie.

Haake’s story matched accounts of the rules that had previously been reported by the New York Times and other outlets. According to the newspaper:

The state party provides each caucus site with a new, unopened deck of cards. In the event of a tie, jokers and instructional cards are removed and the deck “should be shuffled by a precinct chair or site lead at least seven times before use,” according to a memo released by the Nevada Democratic Party.

“The high card determines the winner, and aces are high,” the memo says.

A photograph taken from the story also circulated on social media as the caucuses began: 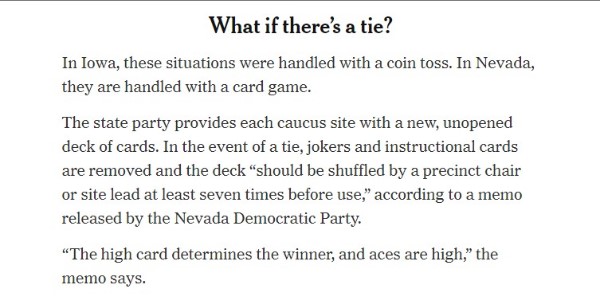 The tiebreaker rules also state that in the event that both cards are similar in rank or number — for instance, each person draws a King or each one draws a seven — then the tie is settled according to the suit of each card. Spades are ranked highest, followed by hearts, diamonds, and clubs.

We contacted Schwartz, MSNBC, and the party seeking further comment, but the Times’ reporting had also been corroborated by other outlets; as USA Today said:

Precinct captains in Nevada have been provided with a unique piece of equipment to break ties – a deck of cards.

According to the Nevada Democratic Party, if two caucus groups are tied, each group will “draw a single card from a deck of cards to break the tie.”

The high card decides the winner, with aces high. Every deck has to be shuffled at least seven times before cards are drawn from it, with all jokers or direction cards removed from the deck.

The Nevada caucuses have been using decks of cards to break ties since 2008, the party says.

The Iowa caucuses uses a coin toss to break ties.

The process drew a similar flurry of coverage in 2016, with CNN airing a dramatization of the process set at a casino card table. But that same year, the Democratic contest between Sen. Bernie Sanders of Vermont and former Secretary of State Hillary Clinton only reportedly reached a tie in one out of the state’s 1,714 Democratic precincts.

The state will send 48 delegates to the 2020 Democratic National Convention. State Democratic leaders have said that they have taken steps to avoid the issues that cast doubt on the Iowa caucuses in January 2020, including the use of what has been described as “a Google-based form, accessible on a party-owned iPad” on top of handwritten results.

A day before the caucuses, CNN reported that one site leader, Seth Morrison, resigned after being told that site leaders statewide would be asked to sign non-disclosure agreements barring them from speaking to news outlets, saying it was too broad.

“If I were to quote disparage the party or talk to the media without their permission, they could sue me for everything I own,” he said.

According to the Nevada Independent, the four-page agreement stated, “If I am contacted by a reporter, I must immediately refer him or her to the Communications Director or Executive Director at the Las Vegas headquarters … THERE ARE NO EXCEPTIONS.”

State party chair William McCurdy later said that signing the agreement was optional for all volunteers.

“For our site leads who are handling sensitive information who voluntary sign this document, they signed on the dotted line and they’ve reviewed it and they would have to, you know, abide by the rules of what they signed and that’s just a fact,” McCurdy told CNN.

Morrison responded by saying that he felt McCurdy was lying. However, other volunteers told the Independent that they had no problem signing the agreement.