A photograph shows four people engaged in an outdoor toast, and one of the individuals is confusingly camouflaged on first sight.

On February 14 2021, a Facebook user shared the following post (archived), captioned “My brain refuses to believe there are 4 people in this photo”:

On Facebook, the post moved and racked up shares quickly. Commenters all shared the original poster’s confusion about the number of people in the image, writing:

“That is some functional camo!”

“Not gonna lie, I had to enlarge this photo in order to see that there was, in fact, another arm there. Wow.”

Although a Reddit logo was visible at the bottom of the image, the post didn’t link through to an original post. Using reverse image search, we located reposts (on r/woahdude and r/funny) as  well as the original post to Reddit’s r/confusing_perspective by u/BalrogBunghole on February 13 2021:

I swear there’s four of us from confusing_perspective

Redditors, like Facebook users, commented about the efficacy of the fourth drinker’s camouflage. And as is commonplace for Reddit, a user with a situationally appropriate user name chimed in: 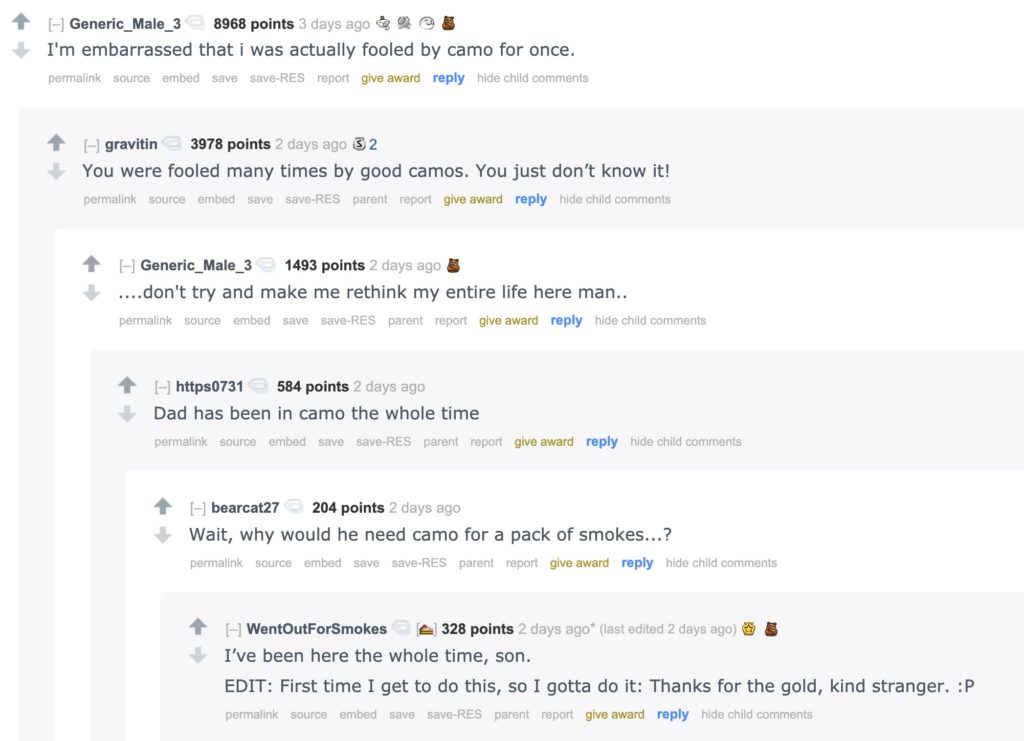 A day later (the same day the image was shared to Facebook), it went similarly viral via Twitter:

My brain refuses to believe there are 4 people in this photo pic.twitter.com/GOwglY3vyw

Although the version initially captioned “My brain refuses to believe there are 4 people in this photo” went viral on Twitter, Imgur, and Facebook separately, the popular image appeared to originate on Reddit’s r/confusing_perspective on February 13 2021. In a comment on one of many reposts, u/BalrogBunghole acknowledged the image was being shared without credit, adding that they “would be bummed, but [they’ve] been around the block enough to know this is the way of things.” But there are, indeed, four people in this photo — that we know of.