Klaas did not select the four European nations at random; he retweeted President Trump’s July 8 2020 tweet below:

Trump began by stating that in “Germany, Denmark, Norway, [and] Sweden,” “SCHOOLS ARE OPEN WITH NO PROBLEMS.” Trump contended Democrats sought to keep schools closed for unspecified political reasons, mentioning the November 2020 election.

In response, Klaas claimed that the following statistics represented new diagnosed cases of COVID-19 in the same countries versus the United States on July 7 2020:

Klaas didn’t provide a source for his numbers, but they were relatively easy to find on Worldometers.info.

We first noticed that the page itself had been archived repeatedly on the Wayback Machine, and that archives of the site’s pages did not consistently display figures as they appeared on the dates.

As of July 9 2020, the site’s figures were available under a tab “2 days ago.” The exact figure in Klass’ tweet was visible for the United States (which, when sorted by volume, was in the first spot):

Germany and Sweden were side by side, numbering 49 and 50 respectively. Although the tweet’s count for Germany matched Worldometers.info’s data, Sweden’s numbers were off, with 295 new cases — not 57:

Norway and Denmark were similarly nearly adjacent, at numbers 114 and 116 on the list sorted by case count. Norway was listed at eleven new cases, and Denmark, ten:

In that respect, the tweet correctly transposed four of the five countries listed — the United States, Germany, Norway, and Denmark. However, according to the same source, Sweden was listed as having 295 new cases on July 7 2020 — not 57.

We located a number of articles from sources in the United States reiterating the figure of 55,442 new cases on July 7 2020, but all in turn cited Worldometers.info as their source.

Is Worldometers.info a Reliable Source for COVID-19 Case Counts and Deaths?

Worldometers.info seemed to emerge from the ether at the start of the COVID-19 pandemic, and as we noted above, had been archived repeatedly as COVID-19 developed into a global pandemic.

The Wayback Machine indicates that the site had no archived pages at any point before late January 2020: 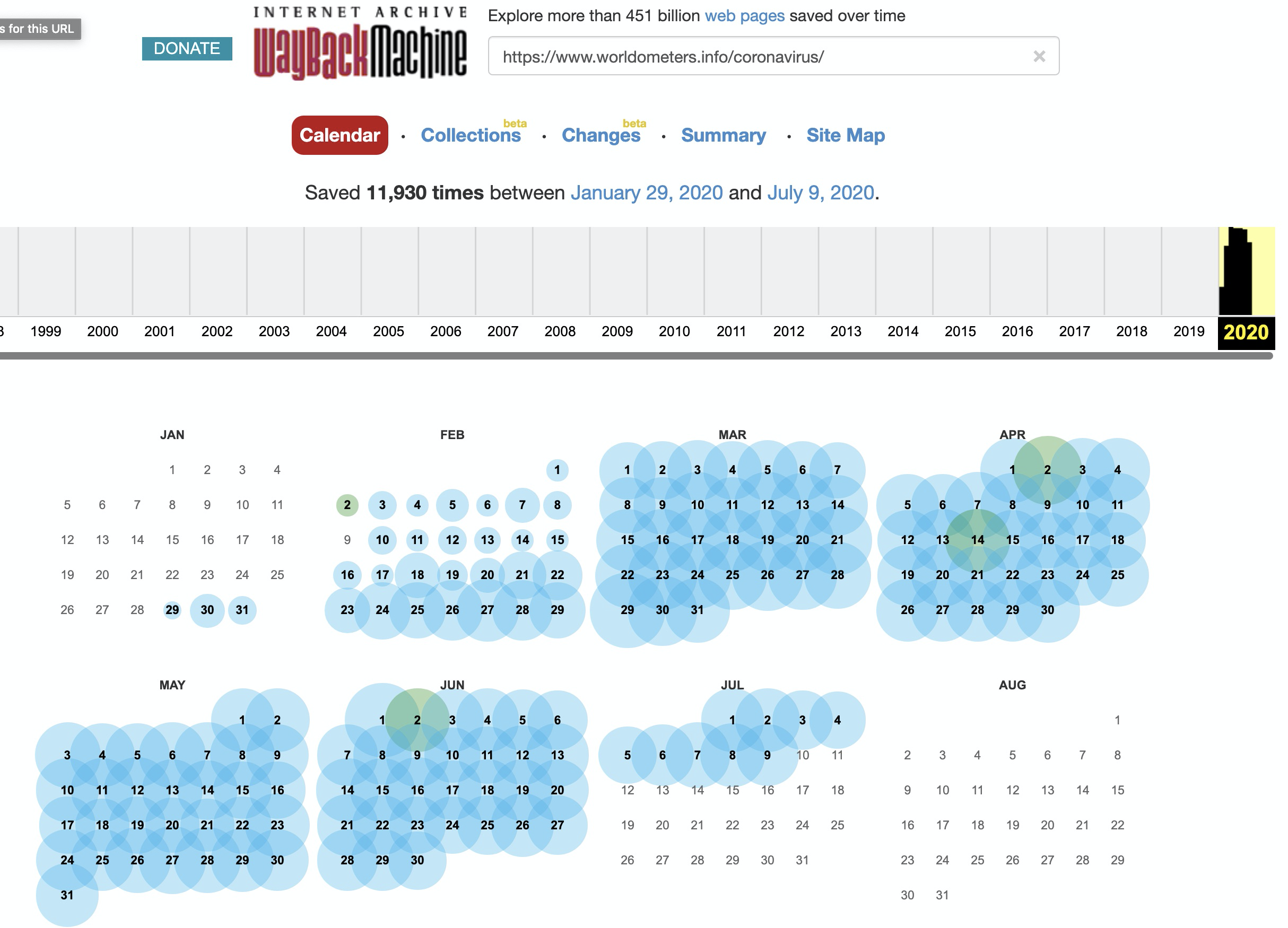 On May 19 2020, CNN published an in-depth look into whether Worldometers.info’s reliability matched its new global prominence as a source for to-the-minute information about the COVID-19 pandemic.

The outlet’s findings were mixed. Citing traffic metrics site BuzzSumo, CNN described a meteoric rise for the newly popular site — finding that in the previous “six months, its pages [had] been shared about 2.5 million times — up from just 65 shares in the first six months of 2019.” CNN noted that for all the credence given Worldometers.info in the news and on social media, little was known about the scope or credibility of its data:

The website claims to be “run by an international team of developers, researchers, and volunteers” and “published by a small and independent digital media company based in the United States.”

But public records show little evidence of a company that employs a multilingual team of analysts and researchers. It’s not clear whether the company has paid staff vetting its data for accuracy or whether it relies solely on automation and crowdsourcing. The site does have at least one job posting, from October, seeking a volunteer web developer.

IDs in the source code for Worldometer and the US Dadax’s websites link them to at least two dozen other websites that appear to share ownership. Some appear to be defunct. Others, such as usalivestats.com, italiaora.org and stopthehunger.com, share the same premise: live stats counters. Most of the sites have a rudimentary aesthetic, reminiscent of a 1990s or early 2000s internet. Some seem quite random. One Italian site displays Christmas poems and gift suggestions, like a bonsai plant (for her), or a plot of land on the moon (for him). Another site is dedicated to Sicilian puppet shows.

Attempts to verify the validity of the wide-ranging, multinational information hosted on the site each day were similarly unsteady and nebulous. One Wikipedia editor cited specific errors, and further observed that the data appeared to be biased in favor of larger figures:

According to Worldometer’s website, its Covid-19 data comes from a multilingual team that “monitors press briefings’ live streams throughout the day” and through crowdsourcing.

Visitors can report new Covid-19 numbers and data sources to the website – no name or email address required. A “team of analysts and researchers” validate the data, the website says. It may, at first, sound like the Wikipedia of the data world, but some Wikipedia editors have decided to avoid Worldometer as a source for Covid-19 data.

“Several updates lack a source, do not match their cited source or contain errors,” one editor, posting under the username MarioGom, wrote on a discussion page for Wikipedia editors working on Covid-19-related content last month. “Some errors are small and temporary, but some are relatively big and never corrected.”

The editor, whose real name is Mario Gómez, told CNN in an email, “Instead of trying to use a consistent criteria, [Worldometer] seems to be going for the highest figure. They have a system for users to report higher figures, but so far I failed to use it to report that some figure is erroneous and should be lower.”

Edouard Mathieu, the data manager for Our World in Data (OWID), an independent statistics website headquartered at Oxford University, has seen a similar trend.

“Their main focus seems to be having the latest number wherever it comes from, whether it’s reliable or not, whether it’s well-sourced or not,” he said. “We think people should be wary, especially media, policy-makers and decision-makers. This data is not as accurate as they think it is.”

A FAQ page on the site itself reflected that ambiguity. Worldometers.info seemed to indicate at least some of its information was crowdsourced, before pivoting to a portfolio of outlets which had referenced its data:

Official reports, directly from Government’s communication channels or indirectly, through local media sources when deemed reliable. We provide the source of each data update in the “Latest Updates” (News) section. Timely updates are made possible thanks to the participation of users around the world and to the dedication of a team of analysts and researchers who validate data from an ever-growing list of over 5,000 sources.

Worldometer’s Covid-19 data is trusted and used by Johns Hopkins CSSE, Financial Times, The New York Times, Business Insider, and many others.

At the end of the paragraph was a “Learn More” link, leading to a page titled “Worldometer COVID-19 Data.” Much of the page’s content was identical to the above excerpt, leaning on purported citations used by other institutions and outlets:

Worldometer manually analyzes, validates, and aggregates data from thousands of sources in real time and provides global COVID-19 live statistics for a wide audience of caring people around the world.

Worldometer is cited as a source in over 10,000 published books and in more than 6,000 professional journal articles and was voted as one of the best free reference websites by the American Library Association (ALA), the oldest and largest library association in the world.

A sample of sources for data was provided for twelve countries on the COVID-19 case pages, from Afghanistan to Azerbaijan. However, the site provided no information about its number of paid employees, how much of its data was supplied by anonymous volunteers, or what sort of fact-checking mechanisms they have in place.

The United States reported more than 60,000 new Covid-19 cases on [July 7 2020], setting a fresh record for new cases reported in a single day, according to data compiled by Johns Hopkins University.

The country reported 60,021 newly confirmed cases over the previous 24 hours as outbreaks continue to expand across a number of states, mostly across the American South and West. Arizona, California, Florida and Texas have accounted for nearly half of all new cases in the U.S. in recent days.

As of July 9 2020, Worldometers.info’s July 7 2020 data differed from the data provided by Johns Hopkins University, listing 55,442 new cases on that date versus 60,021. Johns Hopkins’ coronavirus tracker did not appear to provide information by date and country to contrast their numbers with the numbers in the tweet.

A tweet from political scientist Brian Klaas correctly transposed COVID-19 figures for four of the five countries as they appeared on Worldometers.info — the United States, Germany, Denmark, and Norway. The figures for Sweden were inaccurately transcribed as 57, versus the site’s claim of 295. However, the veracity of Worldometers.info’s statistics was unclear, and its number of new cases listed for United States on July 7 2020 undercounted them by about 5,000. In actuality, we know of no centralized source providing completely vetted figures by date and by country, so we rate the claim Unknown.