Under a new law, people can be arrested for conspiracy to commit murder if anyone travels out of Georgia for an abortion.

On May 7 2019, a Facebook user shared the following screenshot of an apparent article (archived here), along with a lengthy comment about extremely restrictive new abortion laws in the state of Georgia: 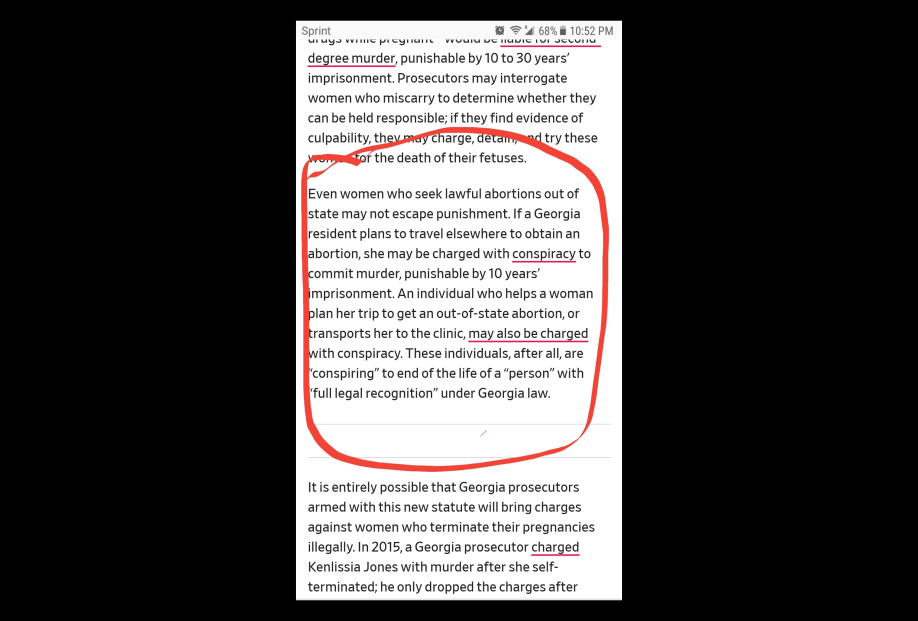 A lengthy comment from the original poster (paragraph breaks ours) extrapolated from the highlighted text in the screenshot, proposing scenarios in particular in which treatment of miscarriages might be affected by the legal restrictions described:

For everyone who keeps thinking this bill wont affect them because you can just go out of state good luck. It’s only a small 10 year prison sentence your gambling with. We now live in a state that is not protecting its female citizens and is actively going to be prosecuting them.

You can now be charged with murder should you be found to have helped cause your miscarriage. Let’s say smoking, or a drink, or getting in a car with a reckless driver etc. The possibilities are limitless for the ways we can now charge women with murder. Thank you governer for adding yet another reason to why the south is the absolute worst place for me and my family.

I have lived and loved here but have never felt truly safe or protected and will ultimately take my skills else where. This state has some of the strictest NP regulations, a majority female profession btw, strictest abortion laws also affecting mostly women. I understand my place and value as a women in this state and it deeply hurts me everyday to realize that my rights are getting smaller everyday. I am in an interacial marriage, a childless career driven woman in ga, and trust me this state is the last place I will call safe or progressive, inclusive or “not racist”.

Even if I wanted children why would I bring them into this place, so they can have your corrupted christian biblical scriptures shoved down their throat, fear that should i have a son and his skin be too dark that he might not come home or be protected by our police, have a daughter who as a mixed girl in ga who will have to fight for everyone’s respect and to be treated as an equal in her career, so I can have kids and have a job not hire me because I am a risk compared to my male counterpart with kids. I’m done, im done with this unequal shit.

The screenshot appeared to have been taken from a May 7 2019 Slate.com article: “Georgia Just Criminalized Abortion. Women Who Terminate Their Pregnancies Would Receive Life in Prison.” It began:

On [May 7 2019], Georgia Republican Gov. Brian Kemp signed a “fetal heartbeat” bill that seeks to outlaw abortion after about six weeks. The measure, HB 481, is the most extreme abortion ban in the country—not just because it would impose severe limitations on women’s reproductive rights, but also because it would subject women who get illegal abortions to life imprisonment and the death penalty.

The primary purpose of HB 481 is to prohibit doctors from terminating any pregnancy after they can detect “embryonic or fetal cardiac activity,” which typically occurs at six weeks’ gestation. But the bill does far more than that. In one sweeping provision, it declares that “unborn children are a class of living, distinct person” that deserves “full legal recognition.” Thus, Georgia law must “recognize unborn children as natural persons”—not just for the purposes of abortion, but as a legal rule.

A paragraphed circled in the image is italicized below. The excerpt was cut off, but the captured section of the article read:

drugs while pregnant—would be liable for second-degree murder, punishable by 10 to 30 years’ imprisonment. Prosecutors may interrogate women who miscarry to determine whether they can be held responsible; if they find evidence of culpability, they may charge, detain, and try these women for the death of their fetuses.

Even women who seek lawful abortions out of state may not escape punishment. If a Georgia resident plans to travel elsewhere to obtain an abortion, she may be charged with conspiracy to commit murder, punishable by 10 years’ imprisonment. An individual who helps a woman plan her trip to get an out-of-state abortion, or transports her to the clinic, may also be charged with conspiracy. These individuals, after all, are “conspiring” to end of the life of a “person” with “full legal recognition” under Georgia law.

It is entirely possible that Georgia prosecutors armed with this new statute will bring charges against women who terminate their pregnancies illegally. In 2015, a Georgia prosecutor charged Kenlissia Jones with murder after she self-terminated; he only dropped the charges after

Slate linked to the text of the bill, “HB 481 Living Infants Fairness and Equality (LIFE) Act,” and its full text was available as a PDF. Other linked items included Georgia’s existing laws regarding “conspiracy,” as well as a Georgia criminal defense lawyer’s page on the charge of conspiracy.

None of the cited resources had to do specifically with the abortion law in Georgia, and both references predated the legislation entirely. Their presence in the article was part of the author’s speculation that such a charge would be applied to people attempting to circumvent the restrictive abortion law, but we found no direct line between the legislation and Georgia’s laws about conspiracy to commit a crime.

In another portion of Slate’s piece, the author again linked to existing laws and applied their existence to the abortion law signed in 2019:

But the most startling effect of HB 481 may be its criminalization of women who seek out unlawful abortions or terminate their own pregnancies. An earlier Georgia law imposing criminal penalties for illegal abortions does not apply to women who self-terminate; the new measure, by contrast, conspicuously lacks such a limitation. It can, and would, be used to prosecute women. Misoprostol, a drug that treats stomach ulcers but also induces abortions, is extremely easy to obtain on the internet, and American women routinely use it to self-terminate. It is highly effective in the first 10 weeks of pregnancy. Anti-abortion advocates generally insist that they do not want to punish women who undergo abortions. But HB 481 does exactly that. Once it takes effect, a woman who self-terminates will have, as a matter of law, killed a human—thereby committing murder. The penalty for that crime in Georgia is life imprisonment or capital punishment.

Additional coverage such as an editorial in the Guardian extrapolated similarly from news of the law’s passage, but linked to Slate as its source for the speculative aspects. In that piece, the author noted that it was tempting to consider the law would not be enforced in the manner in which Slate imagined, but that the possibility was nevertheless alarming.

Other coverage like a Newsweek article focused on the cadre of similarly restrictive laws being passed or considered in other states, and opposition to the law in general. As the Atlanta Journal-Constitution pointed out, Georgia’s “heartbeat” bill would not go into effect until January 1 2020. A representative for the American Civil Liberties Union of Georgia expressed reservations about the bill’s additional “fetal personification” aspects in that article:

If this were just a straight, six-week abortion ban the law on that would be clear on its face. This has so many elements to it that have been cobbled together.

The Slate piece and numerous aggregations of it speculated that the provisions of the Georgia law could potentially extend to charges of murder and conspiracy for: women seeking abortions despite the ban, women who miscarry and are blamed for the pregnancy loss, women who travel out of state to obtain abortions where abortions are legal, and parties who either contribute to the occurrence of miscarriage or assist a Georgia resident in obtaining an abortion out of state.

No such language appears in the bill itself — but as many outlets noted, that alone was not evidence that the claims are unfounded. The Slate article’s premise appeared to hinge largely on Section Two of HB 481, granting unprecedented legal personhood status to embryos:

The General Assembly of Georgia makes the following findings:
(1) In the founding of the United States of America, the State of Georgia and the several states affirmed that: “We hold these Truths to be self-evident, that all Men are created equal, that they are endowed by their Creator with certain unalienable Rights, that among these are Life, Liberty, and the Pursuit of Happiness – that to secure these Rights, Governments are instituted among men;”
(2) To protect the fundamental rights of all persons, and specifically to protect the fundamental rights of particular classes of persons who had not previously been recognized under law, the 14th Amendment to the United States Constitution was ratified, providing that, “nor shall any State deprive any person of life, liberty, or property, without due process of law; nor deny any person within its jurisdiction the equal protection of the laws”;
(3) Modern medical science, not available decades ago, demonstrates that unborn children are a class of living, distinct persons and more expansive state recognition of unborn children as persons did not exist when Planned Parenthood v. Casey (1992) and Roe v. Wade (1973) established abortion related precedents;
(4) The State of Georgia, applying reasoned judgment to the full body of modern medical science, recognizes the benefits of providing full legal recognition to an unborn child above the minimum requirements of federal law;
(5) Article I, Section I, Paragraphs I and II of the Constitution of the State of Georgia affirm that “[n]o person shall be deprived of life, liberty, or property except by due process of law”; and that “[p]rotection to person and property is the paramount duty of government and shall be impartial and complete. No person shall be denied the equal protection of the laws”; and
(6) It shall be the policy of the State of Georgia to recognize unborn children as natural persons.

Section Three of HB 481 provided that a “detectable human heartbeat” determined the process by which an embryo was bestowed the rights of a person under the 14th Amendment:

Unless otherwise provided by law, any natural person, including an unborn child with a detectable human heartbeat, shall be included in population based determinations.

Slate’s article, references to it, and social media screenshots of it redirected debate over Georgia’s restrictive new anti-abortion laws to suggest that the law involved the investigation of miscarriages, criminalized out-of-state abortions, and included penalties for anyone who assists a resident of the state in obtaining an abortion.

What the bill legislates is extreme, and HB 481 grants unprecedented rights of personhood to embryos. As Slate pointed out, under that law women could be prosecuted for miscarriages or traveling out of state — but the law wouldn’t go into effect until at least January 2020, and no information suggested that prosecutors would seek to charge women who electively abort or miscarry in such a fashion.

Although the viral article presented a possibility under the law as written, those provisions themselves were not written into the law. The most critical part had little to do with miscarriage or traveling to obtain abortions, but rather the granting of rights to embryos prior to fetal stages. While the possibility remained that all of the claims about applications of the law could occur under it, they were not coded into the law or implied by it.