An August 2021 study found that the most educated Americans are the most vaccine hesitant.

On August 11 2021, the Twitter account for the extremely disreputable disinformation site ZeroHedge shared a link to a blog post, “Study Finds The Most Highly-Educated Americans Are Also The Most Vaccine-Hesitant”:

Study Finds The Most Highly-Educated Americans Are Also The Most Vaccine-Hesitant https://t.co/osJxj4ftnW

A new report by researchers at Carnegie Mellon University and the University of Pittsburgh has found that the most highly educated Americans are also the most vaccine hesitant.

The researchers canvassed no fewer than 5 million Americans who responded to surveys on whether they were “probably” or “definitely not planning on getting a COVID vaccine.

The results will shock many.

In addition, while the lowest educated saw the largest drop in vaccine hesitancy for the first five months of 2021, those with PhD’s were the most likely to not change their minds.

Although the headline mentioned a “study,” the text referenced a source called “UnHerd.” UnHerd’s assertions appeared in a post headlined, “The most vaccine-hesitant group of all? PhDs,” with the subheading, “A new study found that the most educated are the least likely to get jabbed”:

… according to a new paper by researchers from Carnegie Mellon University and the University of Pittsburgh, this does not paint the full picture. The researchers analysed more than 5 million survey responses by a range of different demographic details, and classed those people who would “probably” or “definitely” not choose to get vaccinated as “vaccine hesitant.”

In some respects the findings are as predicted — for example the paper finds that there is a strong correlation between counties with higher Trump support in the 2020 presidential election and higher hesitancy in the period January 2021 — May 2021.

UnHerd linked to a pre-print of research pending peer review [PDF], a paper titled “Time trends and factors related to COVID-19 vaccine hesitancy from January-May 2021 among US adults: Findings from a large-scale national survey.” The paper was uploaded to medRxiv, “an Internet site distributing unpublished eprints about health sciences” which “distributes complete but unpublished manuscripts in the areas of medicine, clinical research, and related health sciences without charge to the reader” on July 23 2021.

Under “objective,” the paper stated “To understand COVID-19 vaccine hesitancy,” and “Methods” explained:

Immediately thereafter, the pre-print provided “Results” and “Conclusion” appeared, neither of which indicated “having a PhD” was a risk factor for vaccine hesitancy:

COVID-19 vaccine hesitancy decreased by one-third from January to May [2021], with relatively large decreases among participants with Black, Pacific Islander or Hispanic race/ethnicity and ≤ [respondents with less than a] high school education. In May [2021], independent hesitancy risk factors included younger age, non-Asian race, having a PhD or ≤high school education, living in a rural county, living in a county with higher 2020 Trump support, lack of worry about COVID-19, working outside the home, never intentionally avoiding contact with others, and no past-year flu vaccine. Differences in hesitancy by race/ethnicity varied by age. Almost half of vaccine hesitant respondents reported fear of side effects and not trusting the COVID-19 vaccine; over one-third reported not trusting the government, not needing the vaccine, and waiting to see if safe. Reasons differed by degree of vaccine intent and by race/ethnicity.

The paper’s authors explained methodology and background for the first five pages, explaining that the survey curated information specifically from individuals classified as “vaccine hesitant,” i.e., not the general population:

Researchers specifically separated out unvaccinated individuals who indicated they “probably or definitely would not choose to get vaccinated,” because “if and how vaccine hesitancy has changed during the first five months of the US COVID-19 vaccine rollout, overall and among subgroups, [remained] largely unstudied.” Authors expanded “Results” on page six, explaining their findings from January through May 2021:

Disparities in COVID-19 vaccine hesitancy over time. Per Figure 1, from January to May the gap in percent hesitant between race/ethnicity groups among younger adults (panel A) and education levels among all respondents (panel B) decreased, with the biggest decreases among two of the three most hesitant race/ethnicity groups (e.g., Black and Pacific Islanders but not Native American) and the two most hesitant education groups (≤high school and some college education) in January. There was not a decrease in hesitancy among those with a professional degree or PhD. Changes in percent hesitant over time were fairly similar across US Census regions (panel C); however, there was less of a decrease in the Midwest and Mountain regions versus the South, Pacific and Northeast. The gap in percent hesitant by county Trump vote share increased slightly from January to May, with the highest quartile, which was the most hesitant group, having the smallest decrease (panel D). Supporting data is provided in eTable 3.

That particular section was extremely relevant to Watson’s titular claim in “Study Finds The Most Highly-Educated Americans Are Also The Most Vaccine-Hesitant,” primarily that individuals with a PhD were the “most hesitant.”

But what the pre-print cited in the post actually said was:

Page eight of the pre-print once again mentioned PhDs in the “hesitant” group, but the context of that excerpt is important:

The association between hesitancy and education level followed a U-shaped curve with the lowest hesitancy among those with a master’s degree and the highest hesitancy among those with a PhD or ≤high school education versus a bachelor’s degree. Additional demographic risk factors for hesitancy included working outside the home or not working for pay versus working at home, living in the South, Midwest or Mountain versus the Pacific US region, and in a less urban county. Associations were attenuated with adjustment, but remained (Table 1).

A sentence which began “the highest hesitancy among those with a PhD” continued with “or [less than a] high school education versus a bachelor’s degree.” On page 12 and 15, the authors added:

Those with professional degrees (e.g., JD, MBA) and PhDs were the only education groups without a decrease in hesitancy, and by May, those with PhDs had the highest hesitancy. To our knowledge, no other study has evaluated education with this level of granularity, which was possible due to our unusually large sample size (>10,000 participants with PhDs). Further investigation into hesitancy among those with a PhD is warranted.

Particularly hesitant subgroups include Native American and Multi-racial groups of all ages, and White and Blacks adults <35 years; adults with ≤high school education or PhDs; adults living in small metro, micropolitan or non-core urban (rural) counties or counties with high Trump support; adults with a history of a positive COVID-19 test; not worried about serious illness from COVID-19; working outside the home; never intentionally avoiding contact with others; and adults who did not receive a past-year flu vaccination.

On July 26 2021, Carnegie Mellon University issued a press release about the research, reiterating the findings about vaccine hesitancy in PhDs in a contextually accurate fashion:

A study conducted by researchers from Carnegie Mellon University and the University of Pittsburgh has found that vaccine hesitancy has decreased among US adults by one-third between January and May 2021. While tentative people are concerned about COVID-19 vaccine safety and potential side effects, those with stronger views tend to distrust the government. 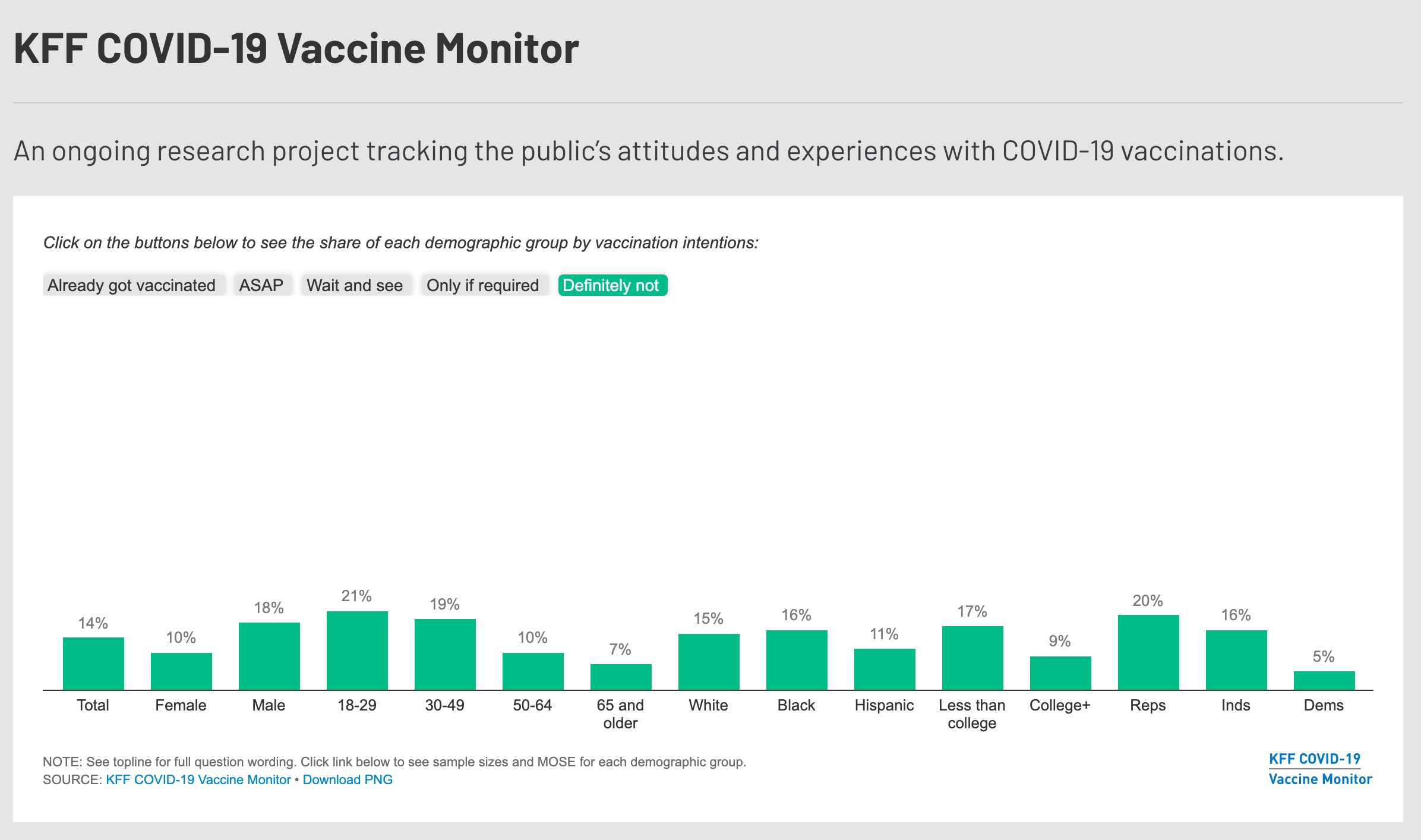 A bias-confirming blog post headlined, “Study Finds The Most Highly-Educated Americans Are Also The Most Vaccine-Hesitant” was predictably popular among disinformation purveyors and those who believe them; it predictably mischaracterized research pending peer review on vaccine hesitancy. The research did not determine that PhDs are “the most vaccine hesitant,” it appeared to indicate that among definitively vaccine hesitant individuals, PhDs were least likely to change their views. The headline and its claims are not true.