What followed was not a news item, nor a video. After a lengthy advertisement played, the “content” of the post was revealed — a 15-second video in meme format, set to the R.E.M. song “It’s The End Of The World As We Know It (And I Feel Fine)”: 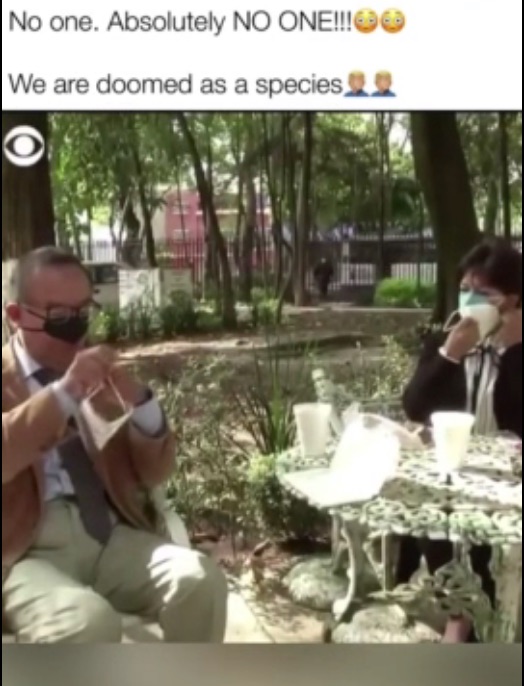 In the video, a man and a woman wore masks only covering their noses. Text added directly to the video read:

We are doomed as a species🤦‍♂️🤦‍♂️

Under the video, the only text was:

Grab a copy of my new book!
From the Foster House to the White House
[LINK]

None of the “who, what, when, where, why” questions readers might have were addressed. Rumble.com wasn’t the only site getting in on the nose-only mask brouhaha, however; the tabloid New York Post‘s March 24 2021 “Researchers create nose-only COVID-19 masks to wear while eating” added just a tiny bit more detail to the story:

Researchers in Mexico have sniffed out a new COVID-19 mask designed for people to wear only over their schnozzes while they eat, according to a report Wednesday [March 24 2021].

The nose masks — worn under a full mask with similar behind-the-ears straps — were unveiled in a demonstration video where a man and woman sit down for lunch, according to Reuters.

At this juncture, with worldwide coverage being lavished upon the viral video, it was unusual that no organization or agency claimed credit for the nose-only masks or leveraged the free promotion to sell a product. The New York Post — like most other sites carrying the claim — cited Reuters as a source for the story. (Reuters is a typically reliable newswire service with fact-checkers of their own.)

However, clicking on “According to Reuters” led to a Yahoo.co.uk page titled “Mexican inventors make nose-only mask.” The body of the “article” was scarcely longer than a haiku, lacked most punctuation, and it read in total:

This is a ‘nose-only mask’

They say the masks protect you while eating and drinking

Nevertheless, every article or post we located cited Reuters as its source for the “nose only mask for eating.” A deeper search for Reuters’ reporting on the innovation led to two identical videos shared in separate @Reuters tweets on March 24 2021:

Researchers in Mexico have designed a 'nose-only mask' that can be worn under a normal face mask pic.twitter.com/gS4t0jHDfw

Here's a look at a 'nose-only mask' designed by researchers in Mexico pic.twitter.com/dTMEKjDuas

Neither tweet linked to an attendant article providing any information at all about the “researchers in Mexico” introducing a “nose only mask, only Reuters’ general YouTube account (not a specific video, and Reuters’ YouTube account had no record of the nose mask video). A little digging turned up a video published by Reuters.com on March 24 2021, and the only accompanying text was:

Meet the ‘nose mask’. created by researchers in Mexico.

We would be remiss not to mention the text flashing on the screen in a video which appeared following a mandatory 30 second long advertisement (which would pause if you toggled away from the page). In its entirety, it read:

Once again, the “who, what, when, where, why” was largely absent; only “researchers in Mexico” were referenced in all the very brief pieces of primarily-video content about the nose-only masks. In cases where content exceeded three sentences, the balance of reporting was typically about social media users’ reactions to the circulating video.

Fox News carried one such article (“Nose-only COVID-19 masks invented by Mexican researchers for use at restaurants”), which observed that no substantive information had been reported about the nose-only masks:

“Hardly a new invention, clowns have been wearing them for years,” one user posted, along with a photo of a bright red clown nose.

The report didn’t note the name of the Mexican researchers, their company or when the nose masks could become available to the public.

At the end of the Reuters video upon which nearly all reporting about the nose only masks for eating was based, a shot lingered on what appeared to be a handful of nose masks scattered across a bedspread: 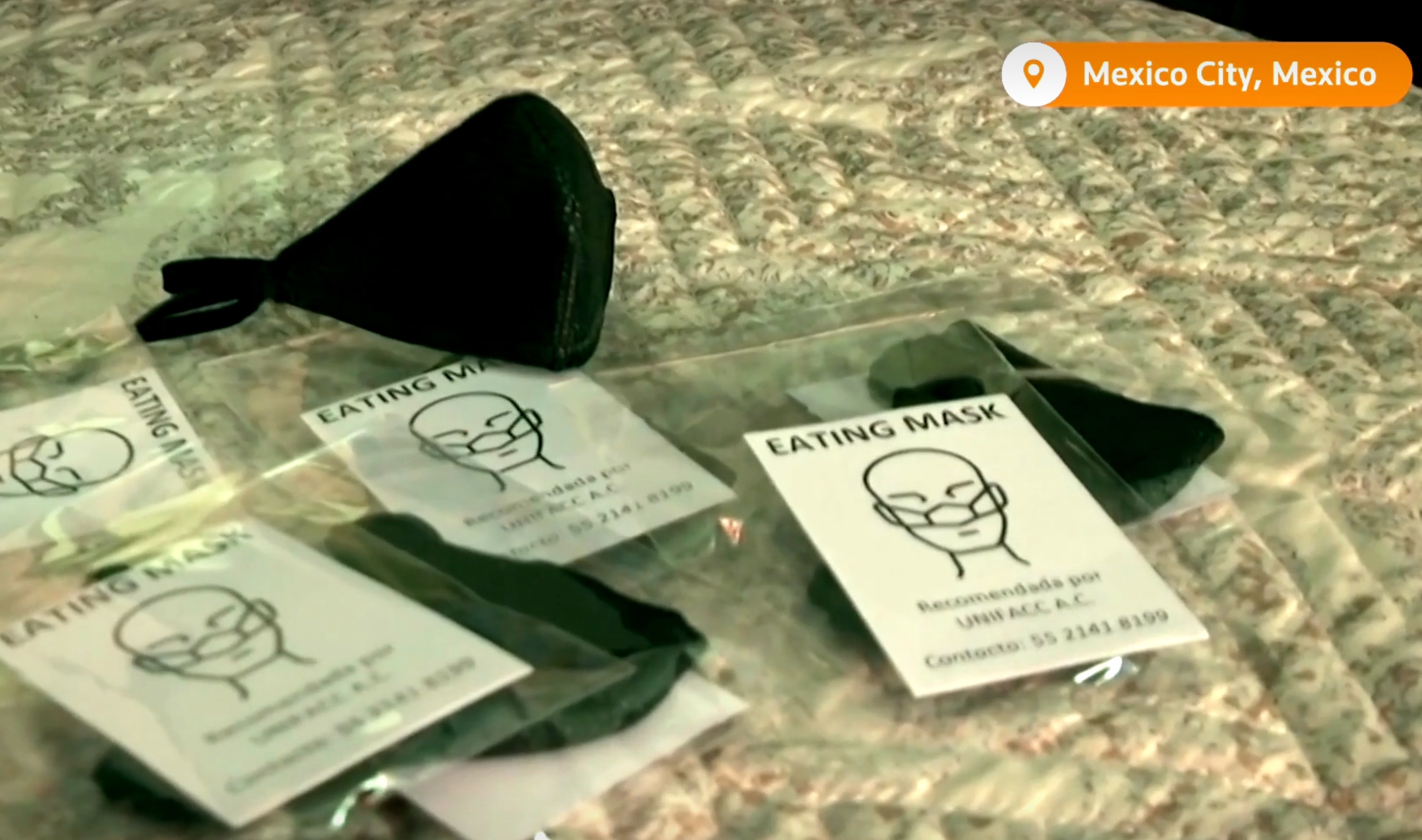 In addition to three or four masks (which may have been smaller than average masks) were printed inserts reading:

A search for “UNIFACC” led to a page for a non-governmental organization called the Unión Nacional Interdisciplinaria de Farmacias, Clínicas y Consultorios AC (translated as “National Interdisciplinary Union of Pharmacies, Clinics and Clinics AC”); a linked website, unifacc.org, was not functional. Additional content on the page was sparse, and it was most recently updated in October 2018.

Finally, we searched what appeared to be a telephone number printed on the cards in the Reuters video, 55 2141 8199. The only result was a Facebook page, “Vida Saludable” (or “Healthy Life”), with a total of 19 followers. That page didn’t feature any of the many major outlets and sites promoting the nose only “eating mask” — like Reuters, Fox News, the New York Post, the Daily Mail, or The Sun.

A February 27 2021 post on the page showed what appeared to be a “nose only mask.” It offered the post in Spanish, roughly translated below:

Researchers have developed a nasal mask to avoid infection of Covid-19 when eating.

“The developer team is composed of Dr. Ana Maria Gonzalez Farías, Dr. Guadalupe Sepúlveda Vázquez from the Regional Hospital of Alta Specialty Ixtapaluca, and MPSS Thalía Fernanda Camarillo González and MPSS Valeria Juárez Garcia from the Faculty of Higher Studies Zaragoza UNAM, and Eleazar Lara Padilla from the ESM of IPN, who evaluated various materials, including fabrics and disposable, so they could be accessible to the entire population.”

A linked February 22 2021 item on VertigoPolitico.com described the “nose mask” as a “prototype,” and explained:

The nasal mask is a new option that a multidisciplinary group has developed, led by Dr. Gustavo Acosta Altamirano, professor at the IPN School of Medicine, who created a prototype of nasal masks that adapt to the anatomy of the nose of anyone, regardless of their appearance or age, allowing the correct filtration of inhaled and exhaled air, without the risk of contagion for different respiratory viruses, including SARS CoV-2.

This nasal mask is an alternative for patients who are seen in dental offices, restaurant diners during the intake of food and beverages, or meals during long-duration flights, which will contribute to the reactivation of the economy of productive activities, decreasing the risk of contagion.

Dr. Gustavo Acosta mentioned that this nasal mask, the only one of its kind, will allow safe activities to be carried out in places such as restaurants, airplanes or dental clinics.

In the entire viral frenzy around the “nose only masks for eating,” no one appeared to track down that original press release describing the concept as a “prototype,” and outlining its specific purposes. Those included a number of activities with which masks interfered, such as dental visits, dining, and flights.

More than a million social media users viewed and shared a number of posts about “nose only masks” invented “for eating,” attributed to “Mexican researchers,” and so the story galloped across big-name news outlets like Reuters with little to no reporting behind it. It took quite a bit of digging to connect a still of the video to a Facebook page with 19 followers, featuring a press release about the nose mask “prototype” and its intended purposes. Despite globally viral content about the “absurd” masks, no company or entity stepped up to leverage the wide-scale promotion for sales — strongly suggesting that the “nose only masks for eating” existed as an idea, with no solid plans to manufacture or sell the items. Moreover, reporting on the “invention” appeared to be solely to drive traffic to sites, not to sincerely report on a new masking innovation.