A Boise Black Lives Matter (BLM) leader was arrested for smearing feces and paint on a statue of U.S. President Abraham Lincoln.

A Black Lives Matter activist in Boise, Idaho, has been arrested in connection to a vandalized statue of former President Abraham Lincoln.

Terry Joe Wilson, 37, was arrested late Tuesday night [March 23 2021] after a warrant was issued for his arrest last week [in March 2021], The Idaho Statesman reported.

Wilson has identified himself online as an associate professor at Boise State University and has been described by the press as the Boise Black Lives Matter chapter spokesman.

Both physical and electronic evidence were reportedly used to identify suspects in the vandalism incident, which occurred in February [2021].

The Daily Wire led with “Black Lives Matter” in their headline and reporting. Reporting from news organizations that were actually local to Idaho had a markedly different tone, including a March 24 2021 KTVB piece headlined, “Man charged with vandalizing Boise’s Lincoln statue.”

“Black Lives Matter” as a group was not mentioned, but Black History Month was referenced (and possibly relevant to the story):

BOISE, Idaho — A Boise man is facing several misdemeanor charges after police say they linked him to the vandalism of a statue of Abraham Lincoln in Julia Davis Park.

The statue, known as “Seated Lincoln,” was defaced with red chalk paint on Feb. 1 [2021], the first day of Black History Month. Feces and signs were also left around the statue.

A Boise man has been arrested in connection with the February [2021] vandalism of a statue of Abraham Lincoln.

Boise police arrested Terry Wilson, 37, late Tuesday night [March 23 2021], according to a Boise Police Department press release. A warrant was issued for his arrest late last week [in March 2021] after physical and electronic evidence was used to identify suspects, according to the press release.

In February [2021], police responding to reports of vandalism discovered the bronze statue of Lincoln in Julia Davis Park — known as “Seated Lincoln” — vandalized with feces, paint and signs. Parks and recreation staff were able to clean the statue, which was not permanently damaged.

The Black Lives Matter movement was not mentioned in either article, both of which described the date of the alleged vandalism and the March 23 2021 arrest of Wilson.

News About the Lincoln Statue Being ‘Vandalized’

On February 1 2021, KTVB also covered the initial reports of vandalism:

The vandalism was discovered just before 8 a.m. [on February 1 2021] Crews from the Boise Parks and Recreation Department went to work and have gotten the statue cleaned up. The Lincoln statue does not have any permanent damage, according to police.

Signs left on and around the paint-spattered statue criticized prisons and corporations, and called for police to be defunded.

Boise Mayor Lauren McLean condemned the vandalism, noting that it occurred on the first day of Black History Month.

Like local news outlets, Boise police did not mention Black Lives Matter in either their original press release about the alleged incident or their March 23 2021 update to it. Those read in part:

On Tuesday evening [March 23 2021] Boise Police officers arrested one of the suspects believed to be involved in an injury to property incident at a bronze statue of Seated Lincoln in Julia Davis Park last month [February 2021]. Following an investigation, both physical and electronic evidence was used to identify suspects in this case. Boise City prosecutors issued an arrest warrant for Terry Wilson late last week [in March 2021]. Wilson was located this afternoon. When officers approached Wilson and attempted to arrest him on the warrant, Wilson ran. Officers chased after Wilson and were able to stop him and take him into custody, at which time Wilson was found to be in possession of a firearm, marijuana and drug paraphernalia. Wilson was taken to the hospital and was medically cleared before being booked into the Ada County Jail on the listed charges.

The investigation is ongoing and additional arrests are expected.

18-7021 INJURING MONUMENTS, ORNAMENTS, AND PUBLIC IMPROVEMENTS. Every person, not the owner thereof, who willfully mars, disfigures, breaks or otherwise injures, or molests, removes or destroys, any work of art, monument, landmark, historic structure, shade tree, shrub, ornamental plant, or useful or ornamental improvement, is guilty of a misdemeanor.

Just before 8:00 this morning [February 1 2021] Boise Police responded to a report of vandalism at a bronze statue of Seated Lincoln in Julia Davis Park. Officers began an investigation which included evidence shared on social media. Crews from the City of Boise Parks and Recreation Department had the paint, feces and signs cleaned up a short time later. There was no damage to the statue. Officers are following up on leads and continuing to investigate to identify who is responsible.

An IdahoPress.com article (“Lincoln statue defacing was a temporary political display, activist says”) reported on the “defacement” of the Lincoln statue in Boise, but most of the piece sat behind a paywall. It began:

On [February 1 2021], the bronze statue of President Abraham Lincoln in Julia Davis Park was defaced, temporarily. A red substance — meant to signify blood — was smeared across the effigy of the 16th president of the United States.

A reprint of the piece published on February 2 2021 included the balance of the reporting. It reiterated that the statue was not damaged and that the “vandalism” was not permanent.

The people responsible — one of whom spoke to the Idaho Press Monday evening [February 1 2021] — say it was a temporary political display, meant to raise awareness on the first day of Black History Month of “history that is being omitted,” particularly Lincoln’s treatment of Indigenous and Black people.

The paint was made of non-toxic, biodegradable chalk, which “washes away easy as can be,” said Samantha Hager of Peaceful Roots of Change, a local advocacy group. Peaceful Roots of Change organized the Lincoln display along with two other groups, Black Lives Matter Boise and Antifa Boise, Hager said. The stunt was planned for about a month, she said.

Regarding the police department’s report of feces as part of the vandalism, Hager said, “We didn’t put that there.”

“No one did that,” she said. “… When we saw pictures of the feces they’re claiming we put there, it’s dog poop. It’s on a walking trail; people bring their dogs there all the time.”

Hager addressed initial reports that “feces” was part of the display, noting that the location was a “walking trail” where dog walkers often go and denying that feces were part of the “temporary political display.” The piece also transcribed portions of a poster board sign shown in photographs of the display:

Photos and videos of the display circulated online Monday [February 1 2021]. The statue, located near the Idaho Black History Museum, was wrapped in a Black Lives Matter flag. Signs positioned near the statue said “defund the police” and called for an end to the “prison industrial complex,” a form of “modern-day slavery.” Another sign accused “honest Abe” of ordering the execution of 38 Santee Sioux, a reference to the 1862 execution of 38 Native Americans by the U.S. Government in Minnesota. Lincoln signed off on the execution of 39 of the 303 Dakota warriors convicted by a military commission of perpetrating massacres during the Dakota War of 1862; 38 of those men were hanged.

Social Media Posts About the Protest from February 1 2021

On February 1 2021, Peaceful Roots of Change shared two posts to Instagram of the “vandalized” Lincoln statue in Boise, along with a close-up of the removable sign used in the display: 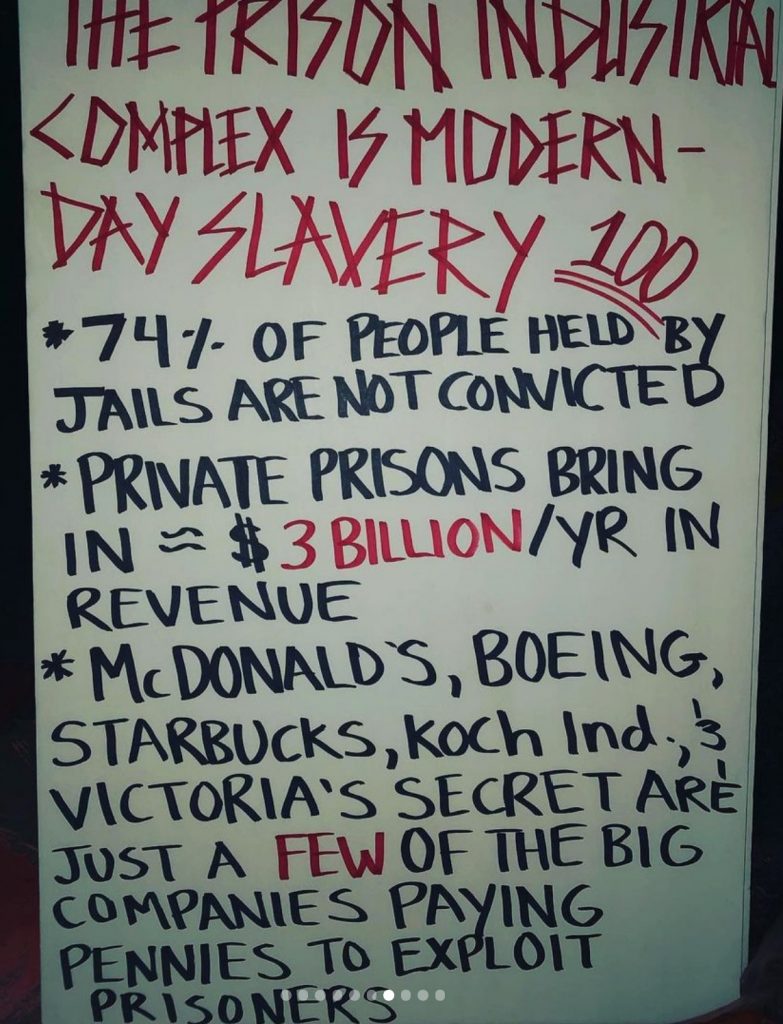 On December 26, 1862, Abraham Lincoln ordered the largest mass execution in American history. 38 Santee Sioux were hanged and 265 others were convicted and tortured. He put bounties on Indigenous individuals asking for scalps of men, women, and children.

Despite the emancipation proclamation, modern-day slavery still exists in the form of the prison industrial complex. Big companies and oligarchs benefit from the slave-like, highly underpaid labor of prisoners. This directly affects low income communities more as they can’t simply ‘buy’ their way out of convictions. Thus, modern day socioeconomic segregation exists.

It’s time we recognize the white-washing and sugarcoating of our American history and begin to truly question our leaders, founders, and idols alike. All our leaders have BIPOC blood on their hands in one way or another and it’s time we stand up for the truth and justice for the many silenced voices of history. #sioux #dakota38 #idaho #boise #dishonestabe #slaverystillexists #blm #blacklivesmatter #indigenous #whitewashing #rocidaho @blmboise @trumpersreaper

In a subsequent post shared the same day, Peaceful Roots of Change observed parallels drawn by a media outlet between the protest and anti-Semitic vandalism in a KTVB item:

“How do you spell terrorist?”

We have your back @exegesisjoe❗️ @boisepd & their white supremacist gang militias will not intimidate us.

That claim was presented misleadingly and inaccurately, and the site used a September 2020 photograph (taken at night) as its featured image to accompany their article about an early morning BLM march.

Daily Wire’s March 25 2021 “Abe Lincoln Statue Vandalized With Poop, Paint; Arrested Suspect Is A Black Lives Matter Leader” item spread virally, leading with the claim that a “Black Lives Matter activist in Boise, Idaho, has been arrested in connection to a vandalized statue of former President Abraham Lincoln.” Within that frame and underneath that headline, it strongly impressed the idea that Wilson alone was responsible for (or led) a covert act of “vandalism,” and subsequently failed to evade arrest.

In actuality, a February 1 2021 IdahoPress.com article explained that three groups — Peaceful Roots of Change, Antifa Boise, and Black Lives Matter Boise executed a planned protest involving the Lincoln statue. Hager asserted that water-soluble “chalk paint” was used — and that the “feces” emphasized in the March 2021 Daily Wire item was not part of the demonstration. All three groups identified themselves as participants via local news outlets on February 1 2021, a detail completely absent in the Daily Wire’s ongoing inflammatory coverage of the Black Lives Matter movement.