On November 16 2021, the Facebook page “Soul Alchemy” shared a meme about a then-imminent lunar eclipse (“Friday,”) purportedly the longest such event in 580 years: 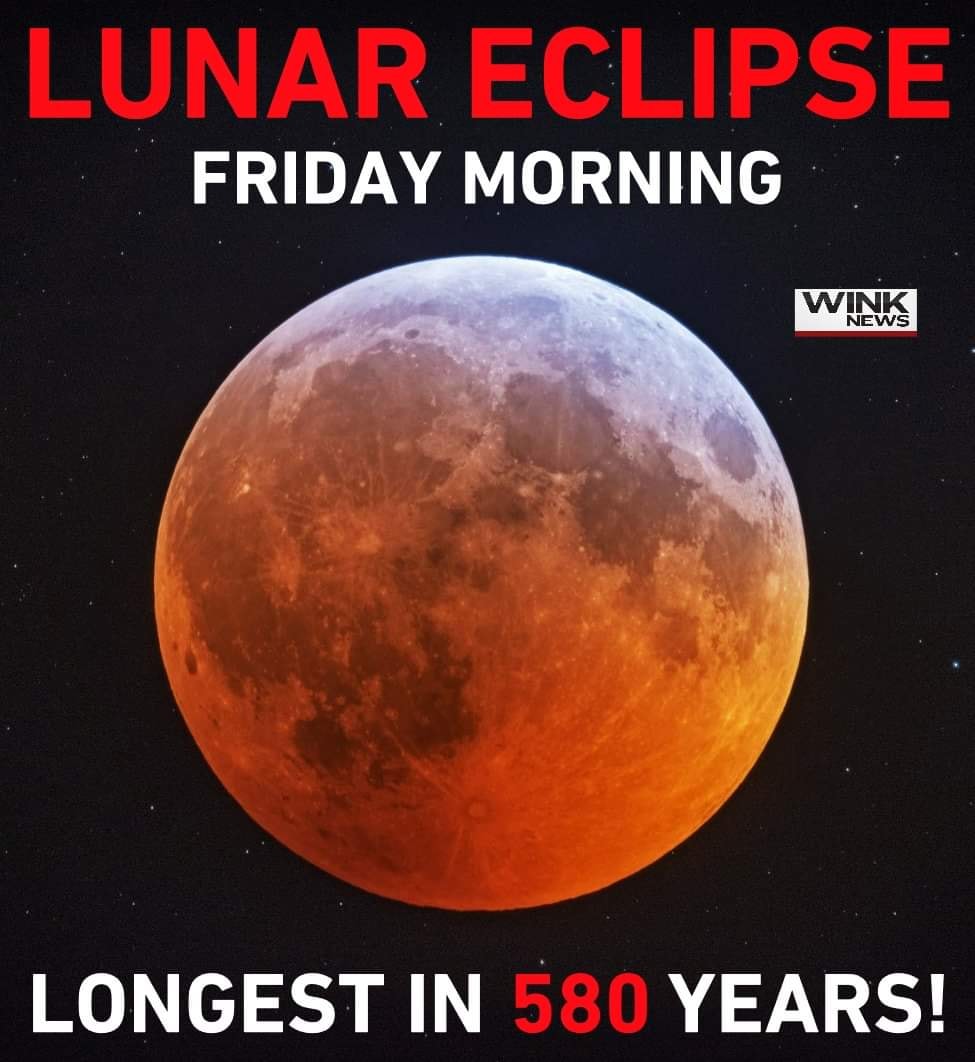 Text on the meme unwittingly set it up for perpetual spread, referencing the day of the week (“Friday”) rather than a fixed date on the calendar (November 19 2021):

HEADS UP FRIDAY! 🌖✨ Get ready for the longest partial lunar eclipse in *580 years*! It’ll begin early at 2:18 AM and peak at 4:02 AM (EST) with a red tint. Clouds could be problematic in SW Florida, but hope for the best. Look towards the western sky and enjoy!

Google Trends data demonstrated concentrated search interest for “lunar eclipse,” “lunar eclipse November 2021,” and “lunar eclipse 580 years” for the 24-hour period between November 17 and 18 2021. Moreover, Google Trends indicated a 300 percent spike in searches for “can you look at a lunar eclipse?” (The answer to the latter question is yes, as the risks of looking directly at a solar eclipse do not apply.)

As for the November 2021 lunar eclipse, aspects of the event were discussed and reported across platforms. Butler University’s Holcomb University tweeted:

Movie of the "NEAR TOTAL ECLIPSE." LONGEST PARTIAL LUNAR ECLIPSE in 580 years occurs on morning of November 19th. 1st parts of the eclipse begin at 1:02AM EST. Max eclipse occurs at 4:02 AM when 97% of MOON in darkest part of Earth's shadow. pic.twitter.com/2HwPpqPbbd

The Beaver Moon tonight will be a partial lunar eclipse with 97% of the moon covered. It'll peak at 3:02am Friday morning. We'll have clear skies, but it will be cold if you want to set your alarms to get a view! #wfaaweather pic.twitter.com/HleRVEK2yM

A November 17 2021 Washington Post article referenced the “580 years” detail in a headline: “A partial lunar eclipse, the longest in 580 years, is coming Thursday night [November 18 2021.]” The outlet detailed when the lunar eclipse might be viewed, in which regions it would be visible, and reiterated the rarity of the event:

Skywatchers on Thursday night [November 18 2021] will be treated to a near-total lunar eclipse as the full moon is plunged into the blood-red light cast by Earth’s shadow. The spectacle will be visible from all of North America, with the exception of eastern Greenland, including the entire Lower 48, Alaska and Hawaii, as well as parts of South America and Russia.

Though it’s technically not a total lunar eclipse, it’s about as close as one can get to totality without actually being there. At peak, 97 percent of the moon will be covered by the umbra, or the darkest part of Earth’s shadow. Only a sliver on the bottom left of the moon will remain faintly illuminated.

A striking element of Thursday [November 18 2021] night’s eclipse will be its duration — 3 hours, 28 minutes and 24 seconds, according to Space.com, which says that will make it the longest partial eclipse in 580 years.

At the time of the eclipse, the moon will be full. Some refer to the November full moon as the “beaver moon,” a name assigned by Native Americans when beavers were particularly active in preparation for winter and it was time to set traps, according to NASA. The November full moon is also sometimes called the frost, frosty or snow moon for the wintry conditions beginning at this time of year, NASA writes.

Space.com’s November 17 2021 article further explained timing and expected regional visibility — primarily that the “November 19 2021” date referenced the night prior to sunrise on that date:

November’s full “Beaver Moon” will occur on Nov. 19 [2021] and will undergo a partial lunar eclipse, visible from eastern Asia, Australia, the Pacific Ocean, much of North America, South America and northwestern Europe.

The full moon officially occurs at 3:58 a.m. EST (0858 GMT), according to Astropixels.com. For New York City observers, the moon will set about three hours later at 6:58 a.m. local time, per Time andDate … The partial lunar eclipse will start at 1:02 a.m. EST (0602 GMT), which is five hours ahead of Eastern Standard Time, eight hours ahead of Pacific Standard Time, and 11 hours behind Australian Eastern Daylight Time (Melbourne). Unlike solar eclipses, lunar eclipses are visible from Earth’s entire nightside — though not every location will see the entire eclipse.

Subsequently, the outlet clarified the time for the eclipse to begin:

For New York City observers, the moon enters the Earth’s penumbra Nov. 19 at 1:02 a.m. local time, and the moon will be relatively high in the sky, at an altitude of about 60 degrees roughly southwest. At 2:18 a.m. local time the top of the moon will start to darken as the umbra, the central part of the Earth’s shadow, touches the moon. This is the beginning of the partial phase of the eclipse. Maximum eclipse will be at 4:03 a.m. — a sliver of the moon will still be lit, but the rest will be the classic red “Blood Moon” hue. The partial phase ends at 5:47 a.m. in New York, and the moon sets at 6:58 a.m., just a few minutes before the penumbral phase ends.

A popular meme claiming that a lunar eclipse would occur on Friday, November 19 2021, and that the eclipse was slated to be the longest of its kind in 580 years. Although the claims were true, the meme’s usage of “Friday” suggested it would almost certainly circulate in perpetuity. Further, the date in question (November 19 2021) involved the very early, just after midnight hours of that date. Readers hoping to catch a glimpse of the event would have to either stay up until after 2 AM or wake up before 5:30 AM to observe part of it.