The trial of Kyle Rittenhouse, the teenager who killed two people and wounded a third during a shooting spree in Kenosha, Wisconsin during protests against police brutality in August 2020, has made daily headlines nationally and internationally — and many of those are being driven by disinformation campaigns pushed by the far right in what appears to be an ongoing attempt to (among other things) muddy public perception of the trial.

One such story — pushed by fanfiction writer turned disinformation purveyor and activist Jack Posobiec — held that he had been personally told by a United States Marshal that jurors were holding up the case because they are afraid they will receive some sort of backlash:

They’re “worried about media leaking their names, what will happen to their families, jobs, etc.” he added in subsequent tweets, “including doxxing [sic] threats from ‘anarchist groups.’”

Numerous people pointed out that jury deliberations are secret and jurors are prohibited from discussing the case with anyone outside the jury pool. Also the case is in state court, not federal, so it’s not clear how a U.S. Marshal would be privy to such information.

Posobiec, an established propagandist who is perhaps best known for his public embrace of thoroughly debunked conspiracy theories such as Pizzagate and QAnon, did not explain how or why this purported U.S. Marshal would be feeding him such potentially explosive information.

This sparked calls by conservative activists for a mistrial, which only intensified after a flap over drone footage that ended up with Rittenhouse’s lawyers asking for just that:

A key piece of evidence in the prosecution’s case – a drone video that shows Rittenhouse fatally shooting the first man he fired aton the night of Aug. 25, 2020 – was called into question Wednesday when Rittenhouse’s defense lawyers said they received a lower quality version of the clip.

The mistrial request was the latest turn in a dramatic trial that has lasted over a week and features dozens of witnesses and videos. Rittenhouse and his lawyers say he was defending himself, while the state says the then 17-year-old was looking for a fight he provoked when he brought his AR-15 style rifle downtown, creating an active shooter situation.

Judge Bruce Schroeder, who has drawn both sharp criticism and high praise over how he has handled the case, has yet to rule on the mistrial motion. He also has not ruled on a separate defense motion for a mistrial with prejudice, meaning Rittenhouse could not be retried.

The issue with the footage appears to stem from a fundamental misunderstanding about how mobile phones work, as well as some other creative maneuverings by defense attorneys:

Rittenhouse’s lawyers say they only received a copy of the drone video on November 5th, after the trial started, and that instead of the 11.2MB video possessed by the state, the file they received was just 3.6MB. “What that means is the video provided to the defense was not as clear as the video kept by the state,” the motion for mistrial claims.

The iPhone’s Mail app automatically compresses video files sent as an attachment, and the defense attorney describes getting a renamed .mov file in a format that sounds exactly like an Apple Mail-app compressed video from an iPhone user. The defense was ultimately able to retrieve the full-resolution video file after sending an attorney to collect it on a USB stick.

Wisconsin defense attorney Jessa Nicholson Goetz tells The Verge that “it is not normal that video or other electronic evidence is AirDropped to defense counsel in the middle of a trial. That is highly atypical.”

As the jury continued deliberating, a new disinformation campaign took shape, this one around a freelance NBC producer who was cited for traffic violations by local police: 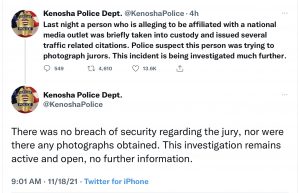 Disinformation purveyors immediately accused the network of sending the producer to take photographs of the jurors, which in turn was used to play into the pre-existing weaponized narrative that the mainstream media was “doxxing” them:

Jurors are ferried to and from the courthouse each day in a bus Schroder described as “sealed” to prevent them from seeing signs, protesters or anything from either side of the contentious trial that might influence them as they deliberate the fate of 18-year-old Rittenhouse.

A spokesperson for NBC News, the sister network of MSNBC, identified the individual as a freelancer in a statement to The Washington Post but denied an intent to make contact with jurors.

“Last night, a freelancer received a traffic citation. While the traffic violation took place near the jury van, the freelancer never contacted or intended to contact the jurors during deliberations, and never photographed or intended to photograph them,” the network spokesperson said. “We regret the incident and will fully cooperate with the authorities on any investigation.”

Schroeder has been critical of the some of the media coverage of the trial and said no one with the network would be allowed in the courthouse for the duration of deliberations….

The judge banned MSNBC from the courtroom for the duration of the deliberations as a result of the accusations.

Each of these rumors and stories — along with various other conspiracy theories — touch on ongoing themes in the weaponized narratives that have coalesced around this trial, such as distrust of mainstream media, explicit denials that racism in the United States exist, demonization of anti-fascist protesters, and various other, more wild-eyed disinformation campaigns.

Rittenhouse faces several felony charges for shooting three people, killing two of them, during a protest against police brutality in Kenosha, Wisconsin, in August 2020 after law enforcement’s extrajudicial shooting of Jacob Blake, who is still recovering from his injuries.