On September 20 2022, Twitter’s “trending topics” prominently featured “NyQuil chicken” (purportedly due to a dangerous TikTok trend or “challenge,”) and clicking on the topic directed people to a large warning: 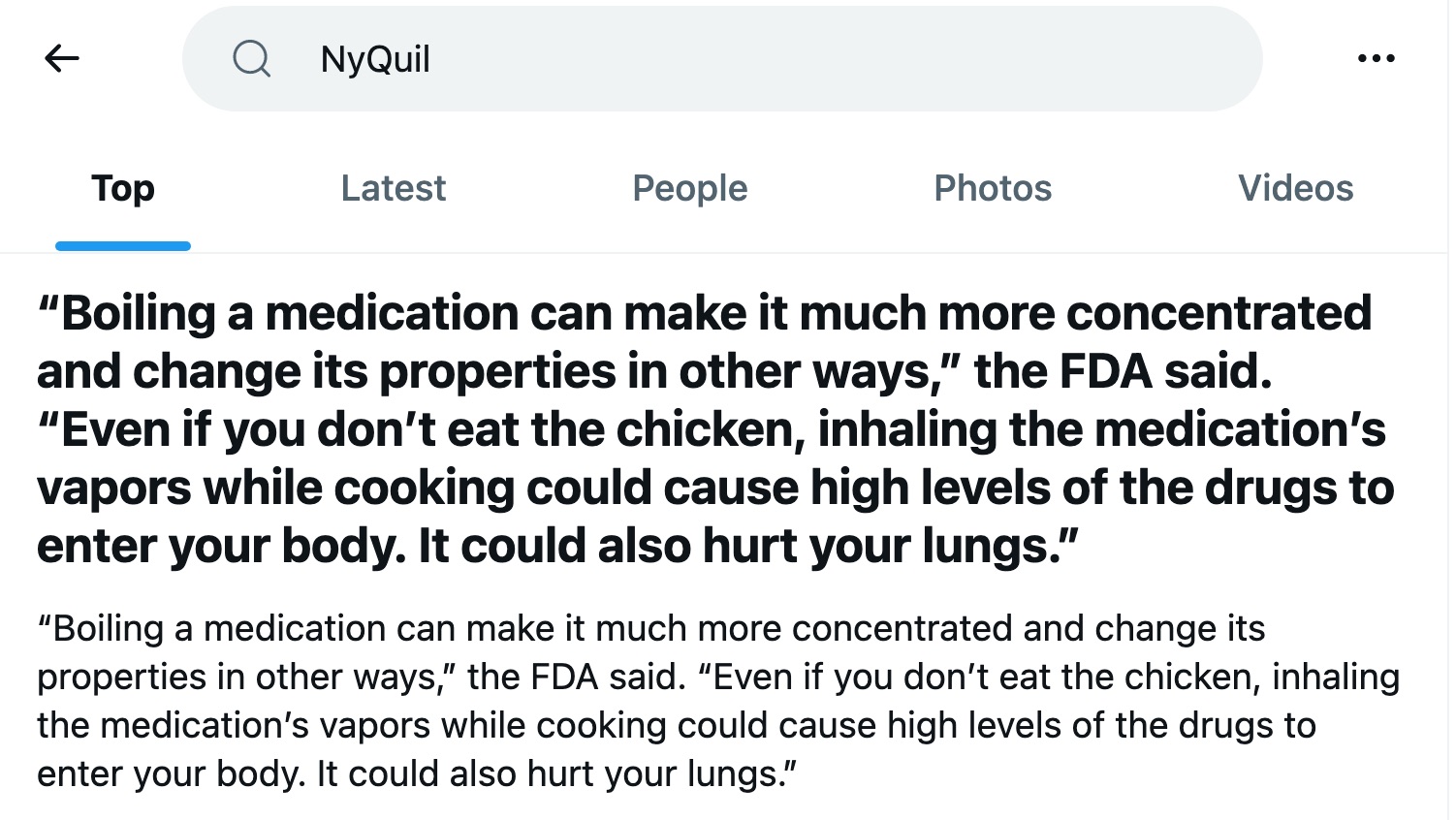 Text emphasized by Twitter contained what appeared to be an excerpt of Food and Drug Administration (FDA) guidance, advising readers that boiling medications “can make [them] much more concentrated,” and that “even if you don’t eat the chicken” that “inhaling the medication’s vapors” could be harmful. Both blocks of text were identical, and neither offered context about the highly unusual concept of “NyQuil chicken.”

Why'd they call it nyquil chicken and not robitusserie

Nearly all subsequent “top” tweets were articles reporting that the FDA had issued some sort of guidance about “NyQuil chicken.” Google Trends data showed a sharp spike in searches for “NyQuil chicken” on September 20 2022, but also measured a larger peak in January 2022.

Interest on September 20 2022 largely began with news reports about a statement by the FDA in September 2022, coverage which framed the “trend” of “NyQuil chicken” as a credible concern. CNN leaned in to the “challenge” scaremongering, but with the observation that most people would “recoil in horror from such dangerous suggestions”:

While most of us would recoil in horror from such dangerous suggestions, adolescents and young adults continue to be susceptible to social media dares like these, according to the US Food and Drug Administration … One recent challenge posted on social media encouraged people to cook chicken in a mixture of acetaminophen, dextromethorphan and doxylamine — the basic ingredients of NyQuil and some similar over-the-counter cough and cold products.

Notably absent from the reporting was any indicator that even one person had participated in a “NyQuil chicken” challenge. Energy that could have been used to determine whether the fad existed at all was instead applied to a section about why young people were purportedly drawn to pointless risk-taking:

The teenage brain isn’t fully developed, according to the American Academy of Pediatrics. In fact the prefontal cortex, which manages rational thought, problem-solving and consequences, doesn’t fully develop until the mid-20s. That’s why teens and young adults are often impulsive and more prone to act without considering the ramifications, the AAP said.

Widespread news reports about a “NyQuil chicken” challenge appeared to originate with a statement published by the FDA on September 20 2022. It was dated September 15 2022 and titled, “A Recipe for Danger: Social Media Challenges Involving Medicines.”

It was about as vague as CNN was about whether real-life “NyQuil chicken” challenge participants actually existed, with no specific incidents referenced or mentioned for either “challenge” mentioned in the advisory. In that statement, the FDA went as far as to say the purported challenge involved “chicken … presumably to eat”:

The challenge sounds silly and unappetizing — and it is. But it could also be very unsafe. Boiling a medication can make it much more concentrated and change its properties in other ways. Even if you don’t eat the chicken, inhaling the medication’s vapors while cooking could cause high levels of the drugs to enter your body. It could also hurt your lungs. Put simply: Someone could take a dangerously high amount of the cough and cold medicine without even realizing it.

An earlier TikTok challenge urged people to take large doses of the allergy medicine diphenhydramine (sold OTC in many products, including some under the brand name Benadryl) to try to induce hallucinations. Prompted by news reports of teenagers needing to go to the emergency room or, in some cases, dying after participating in this challenge and taking too much medication, the U.S. Food and Drug Administration warned the public about the danger of high doses of diphenhydramine.

Like CNN, the FDA admitted the idea “sounds silly and unappetizing.” The FDA also referenced a previous warning “prompted by news reports” — introducing the possibility that the news reports were equally as speculative.

Every few tweets about “NyQuil chicken” featured video or still images of what appeared to be a person cooking chicken in NyQuil. Every single clip or image seemed to originate with the same video — which was also responsible for the January 2022 uptick in search terms, and which was also embedded in a viral tweet from September 15 2022, the day the FDA drafted the statement:

Wait what the fuck people are cooking chicken in nyquil I’m gunna be sick pic.twitter.com/kXkJauxHYR

WTF is wrong with people? 🤔 pic.twitter.com/N8CJYhMnCF

A TikTok watermark indicated that the video was shared (if not created) by user @letmeusejinn, but it was not visible on their timeline as of September 20 2022. An apparent link to the original video was “unavailable,” and a Google search for @letmeusejinn and “NyQuil chicken” returned three results in total — suggesting the “challenge” in question may have functionally been promoted by the September 2022 spate of news coverage. (Incidentally, the one video depicting the practice also involved the creator using a hair straightening flatiron in lieu of a spatula, which seemed to hint that the video was intended as satirical.)

Broadly, the “NyQuil chicken” challenge was reminiscent of the late 2017 and early 2018 “Tide pods” panic, during which children and young adults were accused of eating detergent pods for social media clout. News outlets clamored to report the “dangerous trend,” which ultimately evolved into an object lesson on highly shareable but ginned-up panics.

In a January 2018 assessment (“Only 86 teens ate Tide Pods, so why did the world erupt in moral panic?”) of how news outlets handled “Tide Pods” claims, internet culture reporter Amelia Tate explained how memes about Tide Pods’ resemblance to candy morphed into scarelore about their widespread consumption:

The Tide Pod Challenge originated as a meme at the end of 2017. Tide Pods were jokingly labelled a “forbidden snack” because their bright colours and squishy feel made them remarkably similar to sweets. As the meme grew in popularity, people began pretending to eat the pods for likes, shares, retweets and views. After a small number of individuals did actually bite into (not eat) the pods on camera, pictures and footage of these people resurfaced again and again in news stories decrying the craze.

“Moral panics involving the internet receive further attention and notoriety due to the very nature of the internet itself, in that it contributes to the viral transmission of sensational stories,” explains Dr Lisa Sugiura, a senior lecturer in cybercrime at the University of Portsmouth. Sugiura explains that the origins of such stories are often undiscoverable online, causing things to become further embellished into digital urban myths.

“The issue that really ought to be talked about instead is the addictive nature of the internet,” says Leaton Gray, who explains phenomena like the Tide Pod Challenge get more attention because they play on “people’s worst fears” about endangered children.

When online publications start to clickbait these fears, the stories become more sensationalised. For example, one of the first reports about the Tide Pod Challenge, posted by USA Today, was accurately headlined “Teens are putting detergent pods in their mouth and posting videos online”. The next day, The Independent ran their take: “TEENAGERS ARE RISKING DEATH TO FILM THEMSELVES EATING DETERGENT”. When Unilad picked up on the story, it became: “Hundreds Of Teenagers Poisoned By Tide Pod Challenge”.

A September 20 2022 FDA advisory about “NyQuil chicken” led to Twitter highlighting the “NyQuil chicken challenge” in its “trending” column throughout the day. Predictably, many news outlets published pieces with headlines either reiterating the FDA’s warning, or lamenting the purported need for such a warning. “NyQuil chicken” was a popular search in January 2022, but we only found one (clearly unserious) TikTok video demonstrating “NyQuil chicken.” It was reposted on September 15 2022, the day the FDA drafted the advisory. Like previous “dangerous challenges,” the threat of “sleepy chicken” or “NyQuil chicken” appeared to primarily inhabit headlines, and the FDA did not reference any real-life injuries or deaths caused by said “NyQuil chicken.”