Hawaii Was Not a State When Obama was Born There and his Mother Was Not Eligible to Give Birth to a U.S. Citizen–Fiction!

There are a couple of eRumors about this:

One says Obama was born in Hawaii before it became a part of the United States and is, therefore, not a U.S. citizen by birth, which is a requirement for being president.

The other says that U.S. law stipulates that if only one parent was a citizen at the time of your birth, that parent must have resided in the United States for at least ten year, at least five of which had to be after the age of 16.  The eRumor says that Obama’s mother was only 18 when he was born, which was only 2 years after the age of 18.  One version claims to be from economist Thomas Sowell.

All of these claims are intentional hoaxes, including the version that claims to be from Thomas Sowell.  Somebody simply tacked his name onto the eRumor. 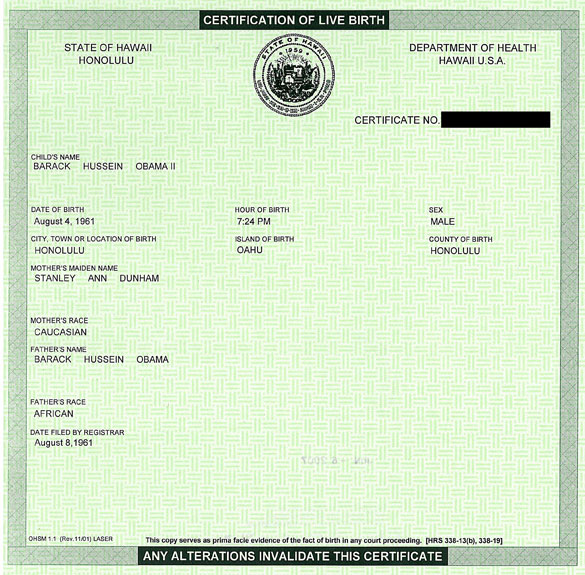 Even if he had been born in Hawaii when it was a U.S. territory, he would still be regarded as a citizen.  According to The Immigration and Nationality Act, Title III, SEC. 305. [8 C. 1405], “A person born in Hawaii on or after April 30, 1900, is a citizen of the United States at birth.”  Republican candidate John McCain was born in Panama and is considered to be a U.S. citizen under the same act.  McCain was born on a U.S. military base and both of his parents were U.S. citizens.

If Obama was born in Hawaii, the issue of the citizenship of his mother is not relevant because he would be a citizen by birth.  But the law cited in the eRumor about having just one parent with U.S. citizenship applied to persons born outside of the United States (or specified U.S. territories).  Between December 24, 1952 and November 13, 1986, the law specified that if you were born outside of the United States and only one of your parents was a citizen, that parent must have resided in the United States for at least 10 years, at least 5 of which were after the age of 16.

After these two eRumors circulated, an Illinois attorney filed a lawsuit claiming that Obama was not born in Hawaii but was born in the African country of Kenya.  CLICK HERE for more on that story.