Warnings that someone is injecting poising into water bottles circulated on social media in March 2018.

There have been scattered reports about people injecting poison (or some kind of foreign substance) into water bottles over the years. But no official warnings were issued about poisoned water bottles issued in March 2018, and there didn’t appear to be an elevated threat.

The rumor was started by various warnings about poison injected into water bottles on Facebook. These warnings don’t cite any credible authorities or reports of poisoned water bottles. Instead, they typically include videos of users squeezing water through tiny holes in the tops of bottles (that were presumably created by a syringe needle while injecting poison). 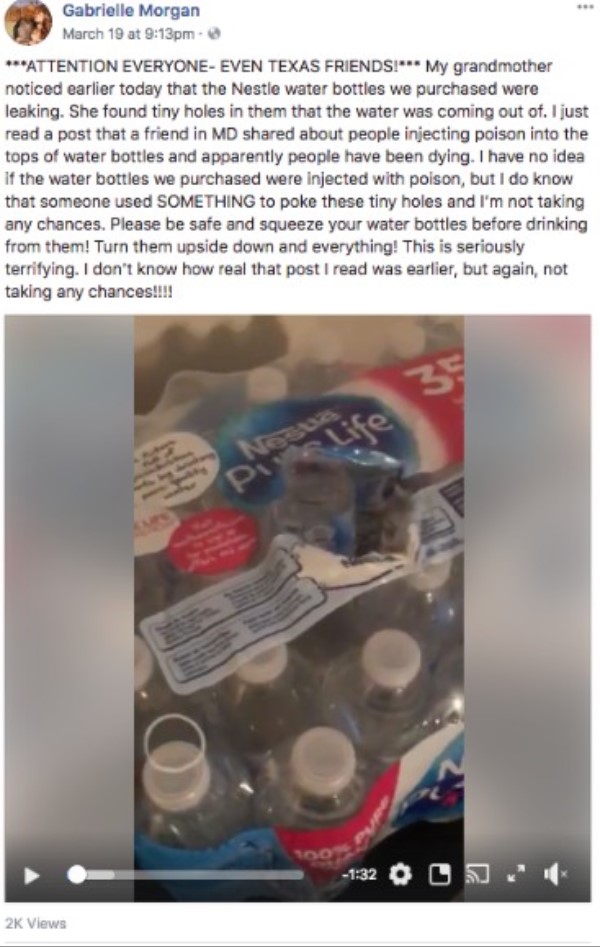 Of course, there’s no way to verify how those holes go there. They could have easily been made by the person filming the video before the recording started. And these posts don’t provide any details that would be required to verify the claims. A number of them stated that the water poisoning happened in Texas — but no public health warnings had been issued there about it by state authorities.  And some of these warnings specifically stated that it was Nestlé brand bottle water that was tainted, but the company issued no recalls or public health alerts verifying that. Given that warnings about poison injected into water are based solely on videos of water bottles with pinprick holes in the top of them, we’re reporting this rumor as fiction.

There have been a number of actual cases of poison being injected into bottled water of the years, however. A Houston man was arrested in December 2011 for allegedly injecting bottles of water with an unknown substance at a convenience store in Texas. A local ABC News affiliate reports that the Harris County Assistant District Attorney said at the time “there is no belief that this is a widespread occurrence.”

Reports of an “Aquabomber” also surfaced in Rome in 2003. CNN reported that authorities in Italy were on high alert after a Italians reported more than 20 cases of bottled water had been tampered with. In most cases, “consumers have noticed a strange smell or the tell-tale pinpricks and handed the bottles to the police.” Incidents were reported in 20 cities, along with tampering of milk and orange juice containers.

Finally, three people were hospitalized in New York in 2000 after drinking bottled water that was contaminated with “an ammonia like substance.” The New York Times reports, “The police commissioner, Bernard B. Kerik, said that a test of the water from the glass showed that it contained ‘some type of sodium hydroxide,’ which he characterized as a kind of ‘strong cleaning agent’ or a ‘lye-type agent.’ He said that the woman, who was not identified, spent several days in the hospital.” Officials were looking at a glass that the water was served in at a restaurant, not the bottle itself, however.

So, while there have been a handful of cases of bottled water being injected with poison over the years, there didn’t appear to be an elevated threat in March 2018. That’s why we’re reporting this one as fiction.