"On this day [August 5] in 1944, Polish resistance fighters liberated 348 Jewish prisoners from the Gęsiówka labor camp during the Warsaw Uprising, and many survivors joined their ranks to fight the Nazis. Sadly, up to 5,000 Jews died in the camp prior to liberation."

On August 5 2021, an Imgur account shared the following “on this day in history” meme about the liberation of the Gęsiówka labor camp in 1944: 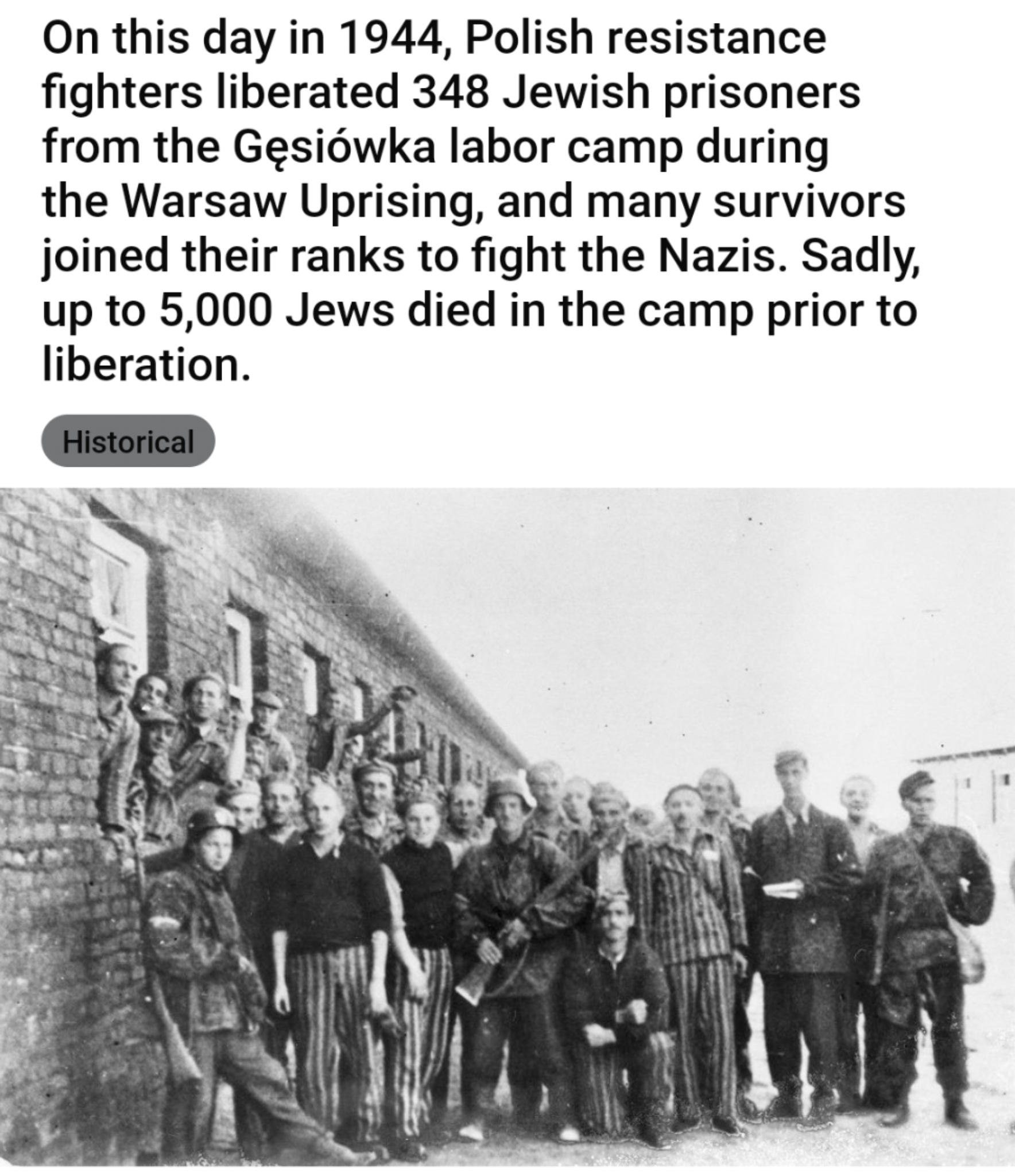 A “flair” (“Historical”) marker on the post suggested that it was a screenshot from Reddit, and text on the image read:

On this day in 1944, Polish resistance fighters liberated 348 Jewish prisoners from the Gęsiówka labor camp during the Warsaw Uprising, and many survivors joined their ranks to fight the Nazis. Sadly, up to 5,000 Jews died in the camp prior to liberation.

That text and image were shared as a post to r/Judaism on August 5 2021:

On this day in 1944, Polish resistance fighters liberated 348 Jewish prisoners from the Gęsiówka labor camp during the Warsaw Uprising, and many survivors joined their ranks to fight the Nazis. Sadly, up to 5,000 Jews died in the camp prior to liberation. from Judaism

Neither the original r/Judaism post nor the Imgur post included more information; the Reddit iteration linked only to the image. A reverse image search sorted by “oldest” led to the Wikipedia entry for “Warsaw concentration camp,” and a version of the image (“Gesiowka.jpg”) on that page featured the following caption:

Jewish prisoners of Gęsiowka, a German-Nazi Camp in Warsaw liberated in August 5, 1944 with Polish soldiers from Battalion “Zośka” of Home Army in the beginning of Warsaw Uprising[.]

Wikipedia’s primary entry matching “Gęsiowka” was a page titled “Battalion Zośka,” with a subsection titled “Liberation of the concentration camp ‘Gęsiówka.'” That entry described “Battalion Zośka” as a “battalion of the Polish resistance movement organization,” adding:

Zośka fighters liberated prisoners of the concentration camp Gęsiówka in August 1944. The 383 able-bodied prisoners (including 348 Jews), both men and women who were left in Gęsiówka to assist with the destruction of the evidence of mass murder, were rescued from certain death. Most of these survivors joined the Zośka unit and fought in the Warsaw uprising.

A second caption on the same image identified it as prisoners and resistance members after the liberation of Gęsiówka:

Prisoners of Gęsiówka and the Zośka fighters after the liberation of the camp in August 1944[.]

A separate page for the Gęsiówka camp noted that an estimated “4,000 to 5,000 are estimated to have died in the camp, during the death march from the camp, the Warsaw Uprising, and hiding after the uprising.”

A History.com “This Day in History” page first published in November 2009 marked the camp’s liberation by members of the Polish resistance:

On August 5, 1944, Polish insurgents liberate a German forced-labor camp in Warsaw, freeing 348 Jewish prisoners, who join in a general uprising against the German occupiers of the city.

As the Red Army advanced on Warsaw in July [1944], Polish patriots, still loyal to their government-in-exile back in London, prepared to overthrow their German occupiers. On July 29 [1944], the Polish Home Army (underground), the People’s Army (a communist guerilla movement), and armed civilians took back two-thirds of Warsaw from the Germans. On August 4, the Germans counterattacked, mowing down Polish civilians with machine-gun fire. By August 5 [1944], more than 15,000 Poles were dead.

A member of the Zoska battalion of the Armia Krajowa escorts two of 348 Jews liberated from the Gęsiówka concentration camp during the Warsaw Polish uprising. August 5, 1944.

The events of the image were also part of a separate USHMM entry on the Warsaw Uprising, with the following introductory paragraph:

On August 1, 1944, the Polish Home Army (Armia Krajowa, AK), a non-Communist underground resistance movement, initiated the Warsaw uprising to liberate the city from the German occupation and reclaim Polish independence. The impetus for the military action was the ongoing retreat of the German forces from Poland, followed by the appearance of the Soviet Red Army along the east bank of the Vistula River. By October 2, 1944, the Germans had suppressed the uprising, deporting civilians to concentration and forced-labor camps and reducing Warsaw to ruins.

The outbreak of the uprising also involved thousands of Jews hiding in Warsaw. Many of them lost contact with Poles helping them on the “Aryan” side of the city. For some Jews, the military revolt was a factor to leave their hiding places and fight against the Germans. The number of Jews who fought remains uncertain—many of them joined the AK under false names. The attitude of the Polish Home Army towards Jewish fighters was ambiguous. Some Jews faced exclusion and harassment, while others felt fully accepted by Polish soldiers. On August 5, 1944, one of the AK battalions liberated 348 Jews from Gęsiówka, a concentration camp located in the former Warsaw ghetto. The majority of them joined the Polish Home Army and fought in the uprising.

Several dozen members of the Jewish Combat Organization (Żydowska Organizacja Bojowa, ZOB) who had survived the Warsaw ghetto uprising of 1943 were still in the city when the Warsaw uprising broke out. Under the command of the former ghetto fighters Itzhak Zukerman, Zivia Lubetkin, and Marek Edelman, the ZOB organized an independent Jewish platoon. Zukerman became its commander. On August 3, 1944, he released an appeal to the remaining Jews of Warsaw to join the uprising. After rejection from the AK side, the Jewish squad joined the People’s Army (AL) fighting in Old Town. Zukerman, Lubetkin, and Edelman survived the Warsaw uprising.

On Imgur, a screenshot from r/Judaism indicated that on August 5 1944 “Polish resistance fighters liberated 348 Jewish prisoners from the Gęsiówka labor camp during the Warsaw Uprising,” “many survivors joined their ranks to fight the Nazis,” and “up to 5,000 Jews died in the camp prior to liberation.” Although both posts did not link to additional information, the dates and figures in the post appeared across historical documents about the Warsaw Uprising and the liberation of the Gęsiówka camp, and the caption was accurate.