In January 2019, a meme that appeared to be a screenshot of an older post asserting that the real Lone Ranger was a black man named Bass Reeves spread on social media: 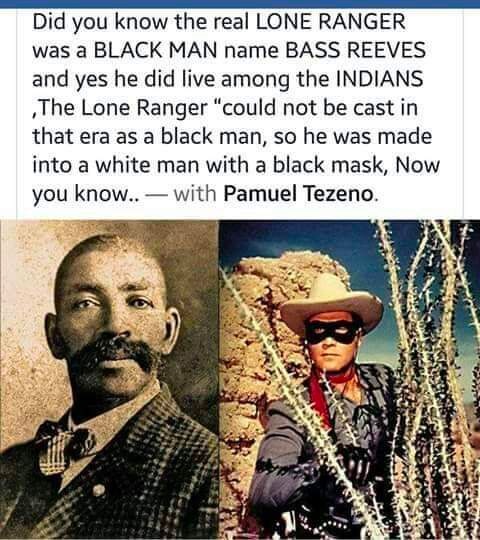 Above what appeared to be an archival photograph of a black man and the television character the Lone Ranger, a screencaptured Facebook post read:

Did you know the real LONE RANGER was a BLACK MAN name BASS REEVES and yes he did live among the INDIANS ,The Lone Ranger “could not be cast in that era as a black man, so he was made into a white man with a black mask, Now you know..

According to the apparent original post, the television character was inspired by Bass Reeves. But the television show The Lone Ranger (which aired from 1949 to 1957) could not depict its hero as a black man, so white star Clayton Moore was given a black mask instead.

The series’ stated premise included an explanation for his masked appearance:

The fictional story line maintains that a patrol of six Texas Rangers is massacred, with only one member surviving. The “lone” survivor thereafter disguises himself with a black mask and travels with Tonto throughout Texas and the American West to assist those challenged by the lawless elements. A silver mine supplies The Lone Ranger with the name of his horse as well as the funds required to finance his wandering life-style and the raw material for his signature bullets. At the end of most episodes, after the Lone Ranger and Tonto leave, someone asks the sheriff or other person of authority who the masked man was. The person then responds that it was the Lone Ranger, who is then heard yelling “Hi-Yo Silver, away!” as he and Tonto ride away on their horses.

History.com delved into rumors about Bass Reeves inspiring the character in February 2018, with a page: “Was the Real Lone Ranger a Black Man?” That began with a brief anecdote from Reeves’ Wild West days before explaining his background:

On a riverbank in Texas, a master of disguise waited patiently with his accomplice, hoping that his target, an infamous horse thief, would show himself on the trail. After four days, the hunch paid off, when the bandit unwittingly walked towards the man who haunted the outlaws of the Old West. Springing from the bushes, the cowboy confronted his frightened mark with a warrant. As the desperado reached for his weapon as a last ditch effort, the lawman shot him down before his gun could leave his side.

Though the quick-draw tale may sound like an adventure of the Lone Ranger, this was no fictional event. In fact, it was one of many feats of Bass Reeves, a legendary lawman of the Wild West—a man whose true adventures rivaled those of the outlaw-wrangling masked character. Reeves was a real-life African-American cowboy who one historian has proposed may have inspired the Lone Ranger.

In 1838—nearly a century before the Lone Ranger was introduced to the public—Bass Reeves was born a slave in the Arkansas household of William S. Reeves, who relocated to Paris, Texas, in 1846. It was in Texas, during the Civil War, that William made Bass accompany his son, George Reeves, to fight for the Confederacy.

History.com reported that Reeves was ordered to accompany the son of William S. Reeves (who owned the household in which Bass Reeves was born) as he fought for the Confederacy. Bass Reeves subsequently escaped to territory in Oklahoma then governed by five tribes (“Cherokee, Seminole, Creek, Choctaw and Chickasaw.”) Laws of the day meant that Reeves could not be pursued as an escaped slave in that territory. In 1865, slavery was abolished, and Reeves went on to return to Arkansas to marry and have children.

The article noted that Reeves “became the first black deputy U.S. marshal west of the Mississippi” when he was brought in to quell rampant unrest in the territory, and that theories about his inspiring the character of the Lone Ranger originated primarily with a 2006 biography about the life of Bass Reeves:

After a decade of freedom, Bass returned to the Indian Territory when U.S. Marshal James Fagan recruited him to help rein in the criminals that plagued the land. Fagan, under the direction of federal judge Isaac C. Parker, brought in 200 deputy marshals to calm the growing chaos throughout the West. The deputy marshals were tasked with bringing in the countless thieves, murderers and fugitives who had overrun the expansive 75,000-square-mile territory. Able local shooters and trackers were sought out for the position, and Bass was one of the few African-Americans recruited.

As deputy marshal, Bass is said to have arrested more than 3,000 people and killed 14 outlaws, all without sustaining a single gun wound, writes biographer Art T. Burton, who first asserted the theory that Bass had inspired the Lone Ranger in his 2006 book, Black Gun, Silver Star: The Life and Legend of Frontier Marshal Bass Reeves.

Although there is no concrete evidence that the real legend inspired the creation of one of fiction’s most well-known cowboys, “Bass Reeves is the closest real person to resemble the fictional Lone Ranger on the American western frontier of the nineteenth century,” Burton writes in Black Gun, Silver Star.

In 2006, Burton laid out a series of parallels between Reeves and the Lone Ranger, but stopped short of definitively declaring a basis for the character. When Django Unchained hit theaters in 2012, analyses of the film made reference to the book and some of that nuance was lost:

The Lone Ranger, for example, is believed to have been inspired by Bass Reeves, a black lawman who used disguises, had a Native American sidekick and went through his whole career without being shot.

The wildly popular Django Unchained is the most talked about film of the last month, and aside from the controversy, it’s popular because of how badass Django is. However, nobody knew about the real Django — a man named Bass Reeves — whom became a Deputy U.S. Marshal in 1875 at the age of 38. During his 32-year career as a Deputy Marshal, Bass Reeves (pictured below) was responsible for arresting 3,000 felones [sic] and killing 14 men, without being shot once.

While no comments from Quentin Tarantino have surfaced as of yet, it’s quite possible Bass Reeves was the basis for fictional character Django from Django Unchained. Bass Reeves was born into slavery in 1838 in Crawford County, Arkansas. He was eventually freed from his owner, George Reeves, in which lead him to live among local Native Americans. Whilst living among the natives, he picked up their customs and learned their languages, and learned how to scout. After living with the natives, Reeves later acquired his own land and built an eight-room house with his bare hands.

Searches for “Bass Reeves” and “Lone Ranger” restricted to results published up until early 2006 returned no legitimate results prior to Burton’s book. After that, Reeves was cited as possible and then definitive inspiration for the character. An article-style biography attributed to Art Burton in 1997 does not mention the Lone Ranger in a piece about the life of Bass Reeves. Neither does an item by the same author apparently published in 1994, nor a Tulsa World article by a different author in 1992.

The notion that Bass Reeves inspired the Lone Ranger appeared to stem from Burton’s 2006 book Black Gun, Silver Star: The Life and Legend of Frontier Marshal Bass Reeves. But Burton wrote about Reeves at least twice prior to the publication of the book, and did not appear to draw the same comparison. Reeves’ extraordinary life was often described as being “forgotten” by history — at the same time, the character of the Lone Ranger was conceived in 1933 for radio before making his way to television. An anecdote provided by Burton appeared numerous times on the book’s product page:

Bucking the odds (“I’m sorry, we didn’t keep black people’s history,” a clerk at one of Oklahoma’s local historical societies answered a query), Art T. Burton sifts through fact and legend to discover the truth about one of the most outstanding peace officers in late nineteenth-century America—and perhaps the greatest lawman of the Wild West era.

Although it was possible Bass Reeves inspired the character of the Lone Ranger, the claim stemmed largely from a book that identified Reeves as a real-life counterpart to the television icon. Reeves died of Bright’s disease in 1910, and it’s not clear how well known his story was as of 1933 (or the publication of a related book in 1915.) Burton encountered stated difficulty in chronicling Reeves’ life in the course of researching his 2006 book, making it more doubtful that the lawman’s exploits were accessible for the creation of the character somewhere between 1915 and the early 1930s.

It remains possible that Bass Reeves provided inspiration for the character of the Lone Ranger, but that claim is far from definitive. Moreover, there is no evidence that the white Lone Ranger’s black mask was a nod to Reeves — by all accounts, Reeves employed disguises in the course of his exploits. Burton characterized Reeves as a “real life” Lone Ranger, but the character’s genesis may have occurred primarily in the years before Reeves’ story was well known by frontier enthusiasts.