David Hogg, a 17-year-old student who became an outspoken advocate for gun control after surviving the Marjory Stoneman High School shooting in Parkland, Florida, is an actor paid to travel and portray a victim.

As some of the survivors of the February 2018 mass shooting attack in Parkland, Florida began to advocate for tighter regulation against firearms, right-wing blogs and botnets deployed a familiar disinformation playbook attempting to undermine them.

In the case of this shooting, which killed 17 people and injured 17 others, these fringe outlets targeted then 17-year-old David Hogg and X González (then known as Emma), smearing them as “crisis actors” — talent paid to act as if they had been affected by the attack. The claim circulated online in part via memes: 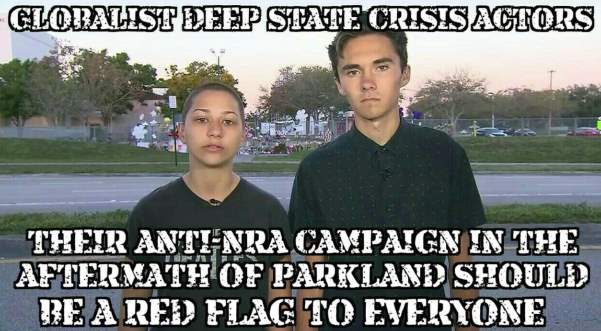 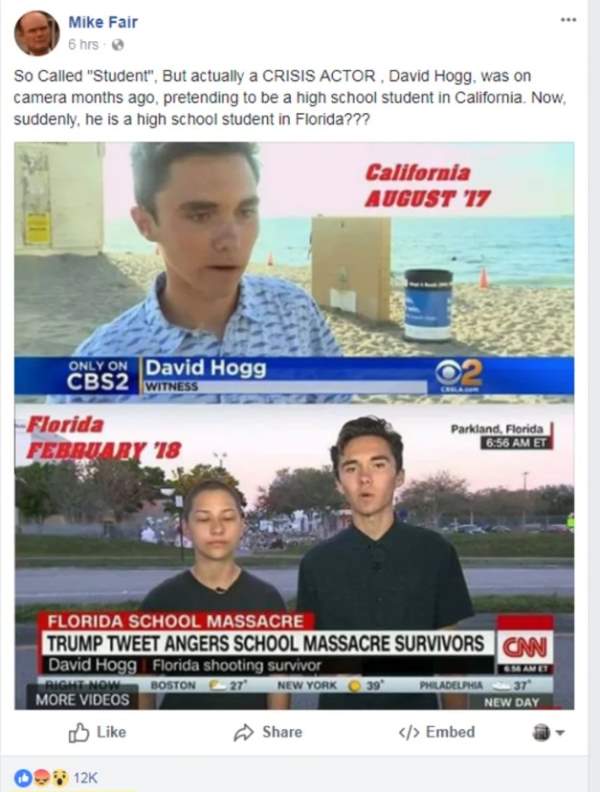 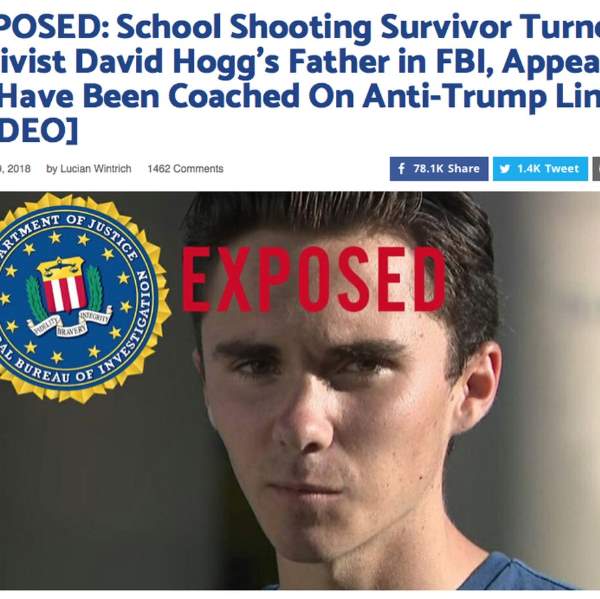 In an example of how deeply Republican officials had embraced this kind of online bilge, an aide to Florida Rep. reporter Alex Leary, then of the Tampa Bay Times, revealed on Twitter that an aide to Florida GOP Rep. Shawn Harrison had accused both teens of being “actors that travel to various crisis [sic] when they happen”:

Here's the email. I asked for more information to back up the claim and was sent another email that linked to a YouTube conspiracy video. pic.twitter.com/VRSVOcjj3E

“I asked for more information to back up the claim and was sent another email that linked to a YouTube conspiracy video,” Leary wrote. The Tribune later reported that the aide, Benjamin A. Kelly, was fired, adding:

“These are absolutely students at Stoneman Douglas. They’ve been there. I can verify that,” Broward County Schools Superintendent Robert Runcie told the Tampa Bay Times after leaving his fourth funeral of the day.

But even as the claims were debunked, as The Guardian reported, the campaign to discredit both González and Hogg was pushed by a familiar array of far right propaganda websites:

On Jim Hoft’s pro-Trump, conspiracy-minded website, Gateway Pundit, Lucian Wintrich performed a hatchet job on David Hogg, suggesting that he was “heavily coached on lines and is merely reciting a script”. Wintrich once told the Guardian that he learned about the perfidy of the left while attending Bard College. In his new piece, he claimed that because Hogg’s father works for the FBI, he may well be part of a broader anti-Trump conspiracy.

Conspiracy kingpin Alex Jones, who once told Piers Morgan that “1776 will commence again if you try to take our firearms,” published a similar attack on his Infowars website. His minions trawled through Hogg’s past, unrelated media appearances, saying that they “raised questions”. The piece then quoted one of their bevy of retired military “experts” who had appeared on Infowars, who repeated the FBI conspiracy theory, claiming that the bureau “has been hiring Social Justice Warriors for years”.

Smearing shooting survivors as “crisis actors” or shootings themselves as “false flag operations” is part of Jones’ stock-in-trade; in October 2021 a judge ruled that Jones must pay damages to the bereaved families of the victims of the 2012 massacre in Newtown, Connecticut, in which 26 people — including 20 children — were killed by a gunman.

As Business Insider reported, Jones also took part in the effort to portray the May 25 2022 school shooting in Uvalde, Texas — which killed at least 21 people — as a “false flag,” while responding to a caller on his radio program just a day later:

“You don’t think this was done to demonize the Texas Republicans and the NRA?” the unnamed caller said.

“It’s very suspicious timing,” Jones said, questioning how the shooter got “all that money” to buy his guns.

Jones then suggested that everyone should be able to question the attack “because there’s been so many false flags, so many provocateured operations.”

Despite the smear campaigns against them both, González and Hogg have continued working as advocates for tighter gun safety laws.

“I really think that a lot of people underestimate the power that they have and the influence that they can have,” González said at a conference in December 2021. “People take for granted that their voice isn’t going to do anything when it really will because that’s what happened to me.”

Meanwhile, in the aftermath of the Uvalde shooting attack, Hogg began promoting a series of marches around the United States to be held on June 11 2022 to call for measures to protect people from mass shootings: