Less than a day before Election Day (November 3 2020), “PA bakery cookie poll” spiked as a search term and a topic of interest on social media:

The official tally isn’t in just yet, but one candidate can safely claim victory in a Pennsylvania bakery’s cookie poll.

Lochel’s, a family-owned bakery located in the town of Hatboro, tells Fox News that the shop’s Trump-themed cookies are “vastly” outselling its Biden-themed cookies by a margin of almost 6 to 1, with some customers driving from neighboring states in order to get their hands on the treats.

“We had one guy drive twice from Staten Island for them,” said bakery owner Kathleen Lochel.

What’s more, Kathleen had previously touted that the informal “cookie poll” — which she’s held for the past four election cycles — has accurately predicted the outcome of the last three elections.

That story explained that unlike voting or polling, “cookie poll” participants often “voted” twice or more — with one customer driving from Staten Island to buy cookies. Fox News added a portion stating that bakery owner Kathleen Lochel planned to cease tallying “votes” in the cookie poll on the evening of November 2 2020, no matter how long the election itself might go on:

After her final tally on Tuesday night [November 2 2020], however, Kathleen says she’ll stop counting up the cookie sales — even if the actual election drags on for days past Nov. 3 [2020]. The bakery, however, will continue to bake the limited-edition cookies for customers who currently have outstanding orders.

That throwaway line was an apparent reference to other news about the Trump administration’s efforts to stop ballots from being tallied at midnight on November 3 2020, and other dire predictions and warnings about election chaos: 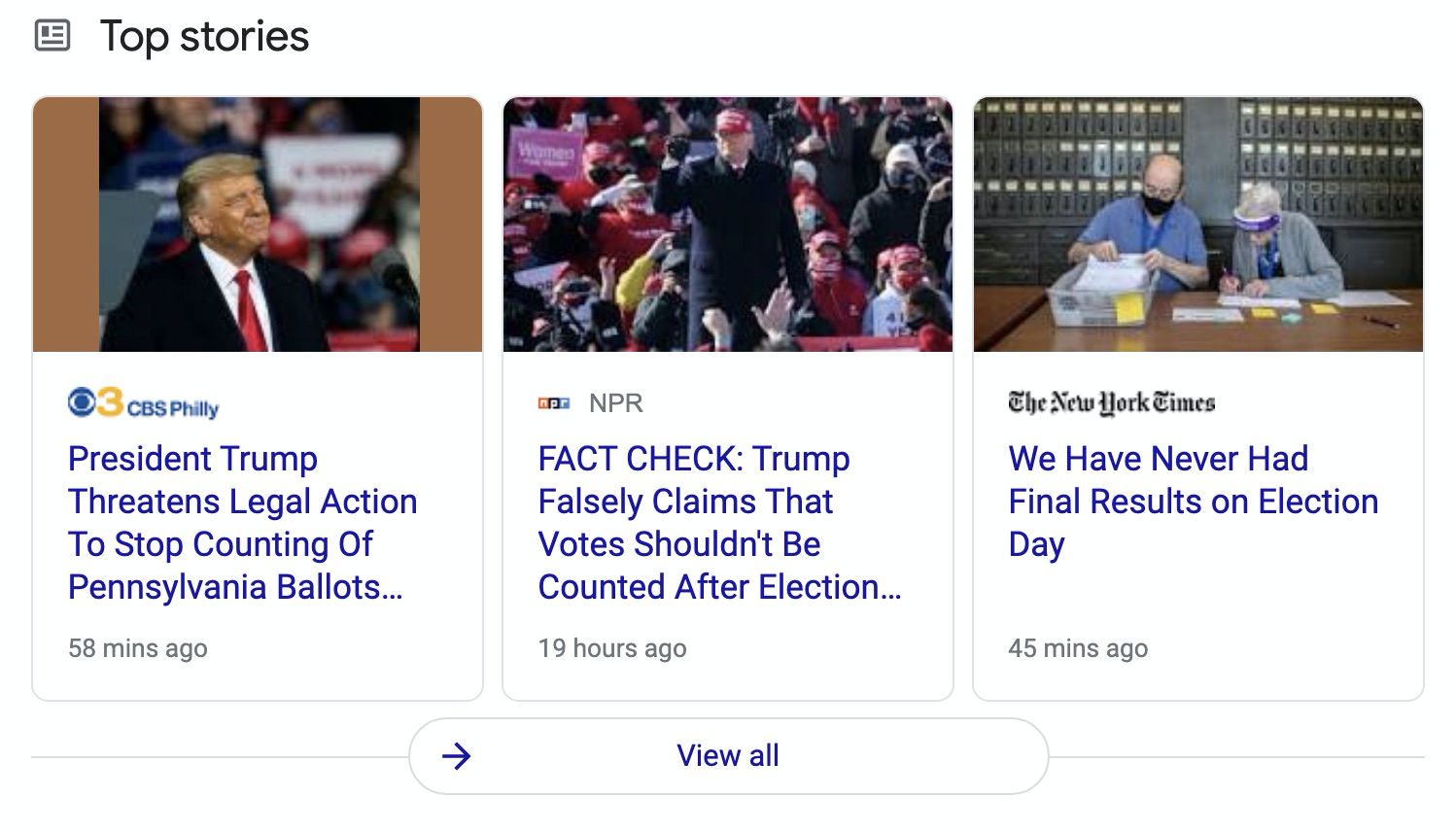 Fox News also seemed to be parroting an October 30 2020 tweet:

President Donald Trump and his reelection campaign are signaling they will pursue an aggressive legal strategy to try to prevent Pennsylvania from counting mailed ballots that are received in the three days after the election.

President Trump is doubling down on claims that the results of the presidential election must be known on election night, falsely asserting “that’s the way it’s been and that’s the way it should be.”

The third article in the above screenshot (“We Have Never Had Final Results on Election Day”), from the New York Times, featured a sub-header reading:

President Trump has been trying to pre-emptively delegitimize ballots counted after Nov. 3. But states have always counted past election night.

For weeks, President Trump and his allies have been laying groundwork to challenge the results of the election if he loses. Now, in the final days of the campaign, he has settled on a blatantly ahistorical closing argument: that the votes in a fair election should not be counted past election night.

“The Election should end on November 3rd. [2020], not weeks later!” he tweeted on Friday, two days after telling reporters in Nevada, “Hopefully, the few states remaining that want to take a lot of time after Nov. 3 [2020] to count ballots, that won’t be allowed by the various courts.”

“You would think you want to have the votes counted, tabulated, finished by the evening of Nov. 3 [2020],” he said at a campaign event a week [prior to the election].

In reality, the scenario Mr. Trump is outlining — every vote in a modern election being “counted, tabulated, finished” by midnight — is not possible and never has been. No state ever reports final results on election night, and no state is legally expected to.

Lochel’s “cookie poll” featured in news cycles earlier in the weeks leading up to the election, such as an October 15 2020 WPVI-TV report noting that cookie sales in the “poll” were nationwide:

The ingredients are also unbiased and bipartisan, from the dough to the icing. They’re making and selling hundreds a day and shipping them across the states.

“We have orders from Florida, Wisconsin, California,” Lochel says.

The demand is so great, Lochel’s even hired people to keep up with the cookie craze. They say it’s a blessing in this pandemic. They want you to know that they’re not endorsing anyone or anything, other than dessert.

However, coverage from weeks prior indicated that Trump supporters seemed to be out-ordering Biden supporters. On October 19 2020, PennLive.com reported:

So, who does Lochel’s Bakery predict to be the next President of the United States? That would be Donald Trump.

Early trends in the cookie poll seemed to hold, as suggested by a November 1 2020 update on the Lochel’s Bakery Facebook page:

Lochel’s said that a total of 33,017 cookies had been sold to that point in the cookie poll, with 27,902 Trump cookies and 5,114 Biden cookies tallied to that point. Just before 2:45 PM on November 2 2020, owner Kathleen Lochel did a Facebook Live to discuss long lines, press coverage from outlets such as Fox News and Vogue.com, and to address social media “negativity” about the poll.