Pete Buttigieg said "I don't have a problem standing up to somebody who was working on season seven of Celebrity Apprentice when I was packing my bags for Afghanistan," and that comment accurately reflected reality.

On October 15 2020, a meme quoting former South Bend, Indiana mayor and Democratic Party presidential candidate Pete Buttigieg began circulating, in which he purportedly said that he was shipped off to Afghanistan while United States President Donald Trump was still filming the “reality” television show Celebrity Apprentice: 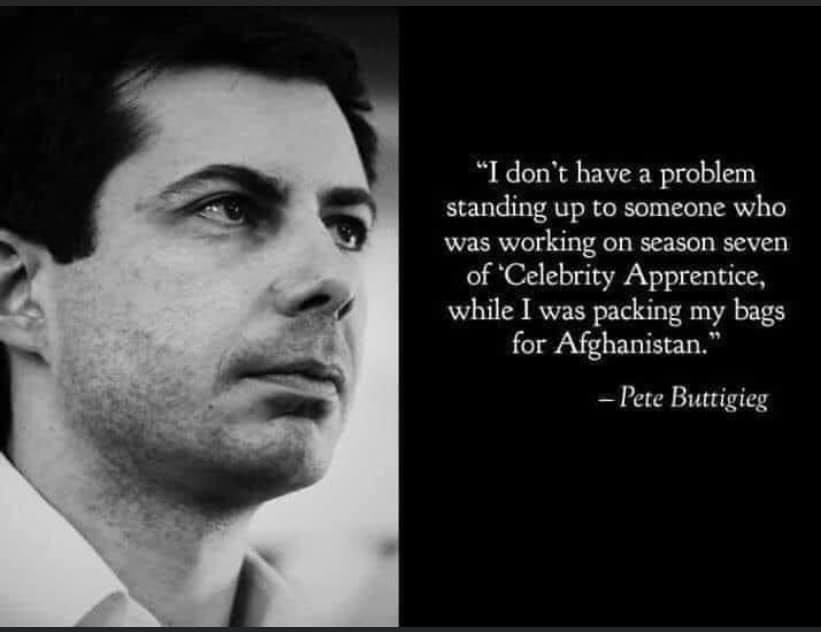 On the left side of the graphic, there was a black and white photograph of Buttigieg. On the right, text read:

“I don’t have a problem standing up to somebody who was working on season seven of Celebrity Apprentice when I was packing my bags for Afghanistan.”

No particular context or date was on the post, just an attribution to Buttigieg.

The Quote, and Context

We located a May 2019 video uploaded by MSNBC, “Pete Buttigieg Takes On Draft Dodger President Donald Trump | All In | MSNBC.” In it, Buttigieg was shown in an interview with Washington Post Live. In response to a question about attacks on Buttigieg by Trump, Buttigieg — who was at that point a presidential candidate — responded:

So … well … I don’t have a problem standing up to somebody who was working on season seven of Celebrity Apprentice when I was packing my bags for Afghanistan.

On November 18 2019, the Associated Press said of Buttigieg:

He is careful not to call himself a combat veteran even as he notes the danger he faced. One of his former competitors for the Democratic nomination, Rep. Seth Moulton of Massachusetts, has drawn a sharp contrast between his four combat tours in Iraq and Buttigieg’s service. And a former commanding officer, who said he thinks Buttigieg would be within his rights to say he is a combat veteran, nonetheless questions the use of a rifle in his ads.

Buttigieg and Rep. Tulsi Gabbard are the only current Democratic candidates with military experience. He would not only be the first Democratic president to have served in the armed forces since Jimmy Carter, but he would also be the first veteran of a post-9/11 war.

Buttigieg was deployed in 2014 for seven months. He and Gabbard were the only 2020 candidates with experience in service.

Trump’s Activities in 2014 and Celebrity Apprentice

Buttigieg said that Trump was “working on season seven of Celebrity Apprentice” at the same time Buttigieg was on his way to Afghanistan.

A November 2014 press release from NBC said of the seventh and final season of Celebrity Apprentice:

NEW YORK – Tuesday, Nov. 4 [2014] – Donald Trump, executive producer and star of NBC’s “The Celebrity Apprentice,” announced on TODAY this morning [November 4 2014 that] the new and exciting lineup of famous faces that will compete in the seventh installment of the series. The new season will premiere on Sunday, Jan. 4 [2015] from 9-11p.m. ET/PT before settling in its regular time slot, Monday at 8-10 p.m.

This season of “The Celebrity Apprentice” has the ingredients to be the most exciting and invigorating season yet. The contestants will be subject to long hours, grueling deadlines and intellectual challenges as they work to raise money for their respective charities. Personality clashes will likely ensue as each contestant is scrutinized and carefully watched by Donald Trump and his advisors – Don Jr., Ivanka and Eric Trump.

It was therefore accurate to say Trump was working on the seventh season of Celebrity Apprentice in 2014.

A circulating post correctly attributed a quote to Pete Buttigieg, in which he said he didn’t have “a problem standing up to somebody who was working on season seven of Celebrity Apprentice when [he] was packing [his] bags for Afghanistan.” Buttigieg was deployed to Afghanistan for seven months in 2014. Season seven of Celebrity Apprentice, hosted by Trump, aired in January 2015 — but was filmed earlier in 2014. The statement was both correctly attributed to Buttigieg and accurate in terms of the events and timeframe referenced.