For the first time ever in U.S. history, a sitting president seeking re-election -- Donald Trump -- will not receive any previous president’s endorsement.

In the days before the 2020 U.S. presidential election, myriad posts and tweets made some version of the following statement:

For the first time ever in U.S. history, a sitting President seeking re-election will not receive any previous President’s endorsement.

"Did you know that:

"For the first time in U.S. history a sitting president seeking re-election will not receive any previous Presidents endorsement."

On occasion, commenters observed that the claim was clearly — if technically — untrue, as the first president did not have any predecessors to endorse him.

More often than not, Facebook posts making the claim that Trump was the first incumbent not to receive any endorsements from any predecessors did not have a Facebook fact-checking link attached to them. One partial iteration from August 24 2020, however, did: 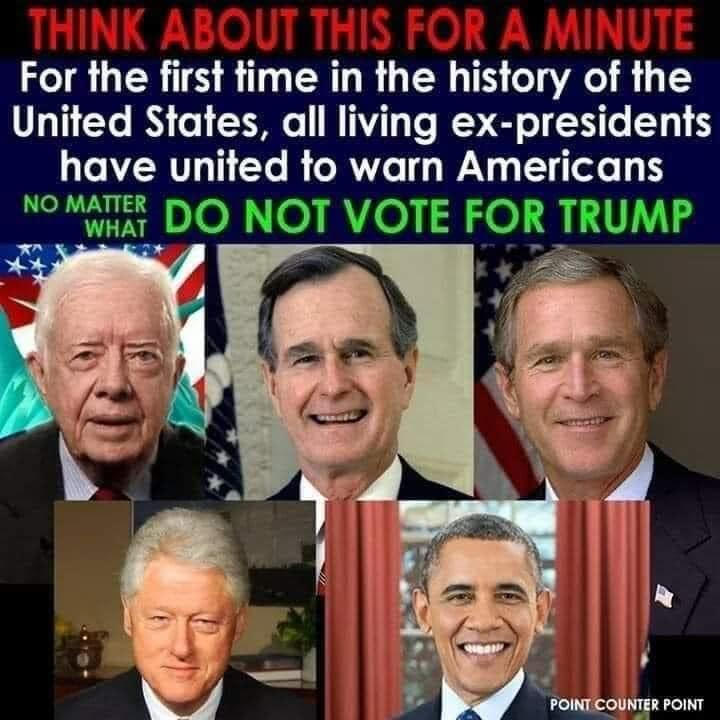 THINK ABOUT THIS FOR A MINUTE

For the first time in the history of the United States, all living ex-presidents have united to warm Americans NO MATTER WHAT DO NOT VOTE FOR TRUMP

An August 2020 Reuters fact-check was linked underneath the post, which began:

Users on Facebook are resharing a 2016 post that claimed “all living ex-presidents” at the time, George H.W. Bush, George W. Bush, Jimmy Carter, Bill Clinton and Barack Obama had warned people against voting for Donald Trump. This is partly false. George W. Bush and the now late George H.W. Bush did not endorse Donald Trump but they did not openly warn people not to vote for him.

That fact-check largely had to do with the additional stipulation that all living presidents had disavowed Trump, noting that in 2016, United States Presidents George H.W. Bush and George W. Bush each withheld endorsements. Reuters noted that the claim dated back to 2016 and was revived in 2020, and that it was possible that the rumor that Trump was the only incumbent not to receive any endorsements from living predecessors originated with that early — but not identical — claim.

We would be remiss if we did not point out that of the five living current and former presidents in 2020, President George W. Bush was the only Republican, aside from Trump himself.

George W. Bush Sr. died in 2018, but did not endorse Trump in 2016, and seeking additional information on the history of endorsements by presidents led to a context-rich and informative Wikipedia page, “Living presidents of the United States.” Within it was a section about the math of living presidents at any given time:

There have been four time periods with six living presidents (i.e., the incumbent and five former presidents):

There have been six time periods when the incumbent president was the only living president, having no living predecessors:

Unsurprisingly and likely due to advances in medicine, three of the four periods when six former presidents still lived were fairly recent. After the period of March 1861 through January 1862, the successive periods began in 1993, 2001, and 2017.

As evidenced by that list, one need not go back all the way to Washington to find examples of times when few or no living former presidents were available to endorse an incumbent. Following Washington, presidents with no living predecessors included John Adams, Ulysses S. Grant, Teddy Roosevelt, Herbert Hoover, and Richard Nixon. Three of those six presidents absent a predecessor served in the 20th century, up to the fairly recent administration of Nixon.

Once again, the matter could be construed as one of technical truth or semantics; six presidents had no living former presidents available to endorse them. Conversely, an argument could be made for whether Trump was unique in an absence of endorsements by predecessors in 2016 and 2020.

A History of Endorsements from Past Presidents and Political Contemporaries

Many Americans were familiar with the musical Hamilton, and a song in the second act, “The Election of 1800,” about Hamilton’s decision to vocally support Thomas Jefferson, who would go on to become the United States’ third president.

The 1800 elections were the fourth in American history, arguably involving endorsements:

Through private letters and meetings, leaders of the two major factions, the Federalists and the Republicans, chose their candidates for the election of 1800. For the first time, Congressmen for each political party met to nominate candidates. The Federalists selected John Adams and Charles Cotesworth Pinckney, while the Republicans put forward Thomas Jefferson and Aaron Burr. The candidates remained outwardly aloof but relied on partisan newspapers, pamphlets, and personal letters to obtain support. Activists of opposing parties often used vehement name calling and smear tactics against Adams and Jefferson. The Constitution did not distinguish between candidates for the presidency and vice presidency. As a result, when each Democratic-Republican elector cast his two votes for Jefferson and Burr, the result was a tie (each man got 73 votes). John Adams received 65 votes and Pinckney 64. For the first time, the House of Representatives was called upon to decide a presidential election. After 35 ballots, however, it still had not chosen a president. Finally, Federalist Alexander Hamilton, detesting Burr more, used his influence to support Jefferson, who won the election and became the third president.

We found no specific point at which endorsements from former presidents became a norm, but information from the Library of Congress indicated that no such endorsements likely took place in 1920, when the only two living presidents were Woodrow Wilson and William Howard Taft:

For the first time in a generation the party had no recognized leader such as Grover Cleveland, William Jennings Bryan or Woodrow Wilson. Retiring President Wilson’s refusal to endorse a candidate prevented the emergence of any one candidate as the front-runner.

We also found a March 2004 research paper [PDF] which examined endorsements through the lens of newspapers, beginning its review of data in the year 1940.

Endorsements on Record in 2020 for Trump and Joe Biden

As of October 15 2020, no former presidents had endorsed Trump; former U.S. Vice President Dan Quayle did, however. Three former presidents — all of whom were Democrats — endorsed Joe Biden in 2020. They were Jimmy Carter, Bill Clinton, and Barack Obama.

Myriad social media posts in 2020 claimed that “for the first time in U.S. history, a sitting president seeking re-election will not receive any previous president’s endorsement.” The majority of living presidents in 2020 were Democrats (Carter, Clinton, and Obama), and Bush sat out endorsements in both 2016 and 2020. At least six sitting presidents had no living predecessors at the time they sought re-election, and could not have possibly secured any endorsements. Finally, the historical relevance of endorsements from former presidents was viewed in the meme through a fairly modern lens, when records of notable election year endorsements were fairly scattershot throughout much of American history.