An image shows a Trump supporter's truck being repossessed in Florida, and it is often described as "a perfect metaphor" for current events in the United States.

Around October 12 2020, a photograph described as a “Trump supporter’s truck being repossessed in Florida,” flags still flying, spread on several social media platforms, including Twitter:

In the above tweet, a user shared the photograph and wrote:

A Trumpanzee in Florida having his truck repossessed. Isn’t this a perfect metaphor for how 💩 has handled our Nation’s finances

On Imgur, the image was posted two separate times on or around October 12 2020, each nearing or exceeding a six-figure view count:

Now that’s an image for our times

In the first of two posts above, no explanation or location was included. The second was a screenshot of a Facebook post, which lacked a date. The same screenshot was shared on the page “Blue Dem Warriors” on October 13 2020, captioned “Small pleasures are still pleasures”:

First thing I witness in this beautiful 4 am morning one of Trump Fans Truck getting Repo with the flags and all [five emojis].

An October 12 2020 post on the page Funny-Trump-Stuff featured the same image, without Ladyj Alonso’s caption: 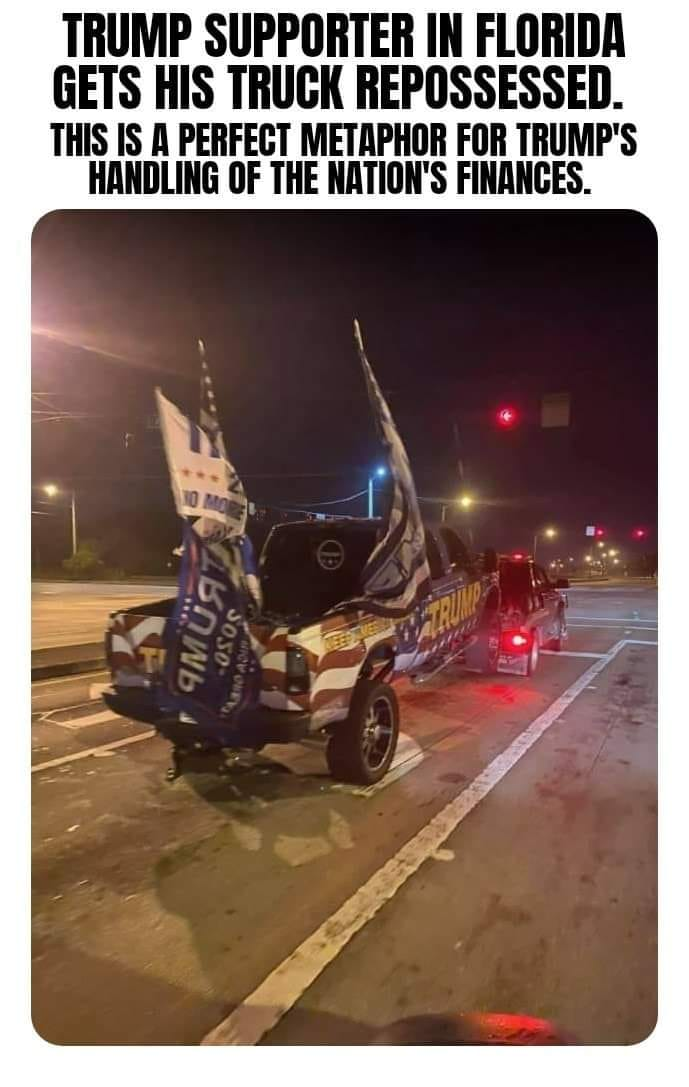 That image had a caption similar (but not identical) to one of the earliest and most popular iterations of the image on Twitter. The caption read:

TRUMP SUPPORTER IN FLORIDA GETS HIS TRUCK REPOSSESSED.

THIS IS A PERFECT METAPHOR FOR TRUMP’S HANDLING OF THE NATION’S FINANCES.

Although we found nine separate screenshots of Ladyj Alonso’s post shared on Facebook, it appeared the original was either deleted or later set to “friends only.” On the truck being towed in the image, a flag obscured the vehicle’s tags; the towed vehicle obstructed the view of the tow truck’s license plate.

The original poster’s location shows that they lived and worked in Florida, likely the reason later variations described the photograph as having occurred in that state. Commenters across iterations debated whether the vehicle was being repossessed or simply towed to another location for reasons such as mechanical failure, with no firm consensus achieved.

As for whether the Trump supporter’s truck being putatively repossessed was a “perfect metaphor” for anything, that claim was purely subjective and opinion-based.

Based on available public posts, it appeared the “Trump supporter in Florida’s truck” being towed was likely an unedited image, originally shared on or around October 12 2020. It appeared as if the original poster had inferred the vehicle was being repossessed “with the flags and all,” but it remained possible that the truck was being towed for an unrelated reason. While the image was probably authentic and unaltered, the story behind the photograph was not firmly known, despite widespread inferences about it on Twitter, Imgur, and Facebook.