A March 2015 photograph shows a weasel riding atop a woodpecker in a London park.

An amateur photographer from England ensured himself a place as an online legend in 2015 after he captured an improbable — but real — moment involving a woodpecker and a weasel.

“I heard a distressed squawking noise and feared the worst,” Martin Le-May told the BBC in recounting the photo, taken at an East London park. “I soon realised it was a woodpecker with some kind of small mammal on its back.” 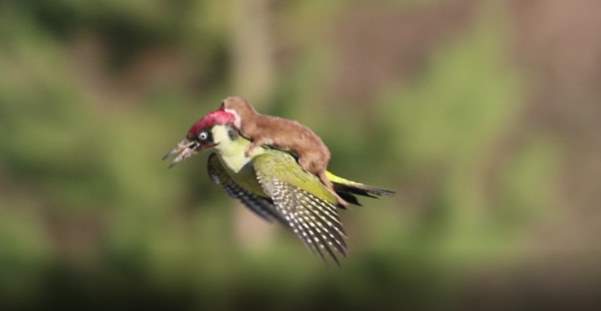 Le-May’s snapshot showing the weasel riding atop the bird spread widely enough online to net him the interview with the BBC and not just fact-checking but analysis in National Geographic:

“While it looks like a bizarre event, it’s really not all that surprising if you know a little bit about these two species,” said David Mizejewski, a naturalist with the National Wildlife Federation, in Virginia.

Mizejewski said European green woodpeckers feed on ants, which means they spend a lot of time on the ground. This type of foraging behavior makes the birds vulnerable to attack from predators—in this case, a hungry weasel.

Least weasels are carnivores, and while they typically take down mice and voles, these tiny predators have also been known to prey upon animals much larger than themselves, including rabbits, frogs, and birds.

“The least weasel’s signature move is to sever the spinal cord of its prey with a bite to the neck, which is exactly what we’re seeing in the photo,” said Mizejewski.

In a separate interview, however, Le-May said this encounter had a much less bloody ending:

The woodpecker landed in front of us and I feared the worst. I guess our presence, maybe 25 meters away, momentarily distracted the weasel. The woodpecker seized the opportunity and flew up and away into some bushes away to our left. Quickly the bird gathered its self respect and flew up into the trees and away from our sight. The woodpecker left with its life, the weasel just disappeared into the long grass, hungry.

The photograph, dubbed #WeaselPecker online, not only spread but produced variations:

The incident also prompted an unidentified prankster to put up a fake sign marking Hornchurch Country Park as the “home of the woodpecker-riding weasel”:

As of February 2022, the #WeaselPecker tag shows that every so often, somebody on social media happens upon the photo for the first time and brings another round of attention toward both the image and Le-May.