Summary of eRumor:
A Twitter user claiming to be a USPS employee stirred controversy with a post about ripping up absentee votes for Donald Trump in Columbus, Ohio.
The Truth:
The source of this rumor about a postal worker tearing up absentee ballots for Donald Trump has said it was a joke, and USPS confirmed that the tweets didn’t come from one of its employees.
The controversy started on October 17th as Trump ramped up complaints that the election was rigged and blasted Republican leaders for not taking action on “large scale voter fraud happening on and before election day” on Twitter.
The day before, Twitter user @randygdub said they “love working at a post office” in Columbus and had spend the day ripping up absentee ballots that vote for Trump: 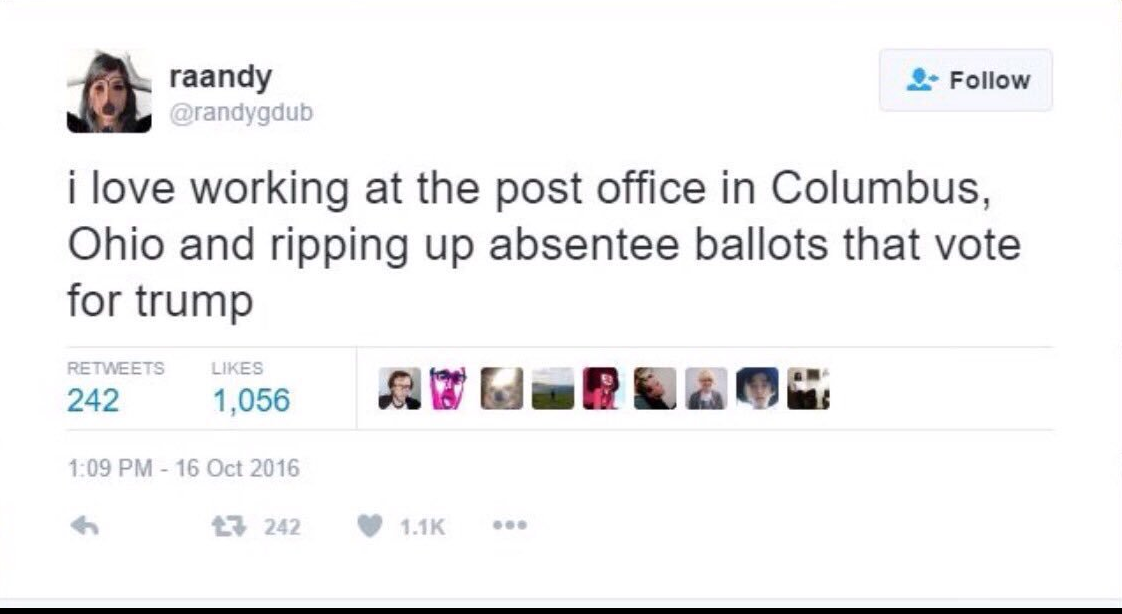 Naturally, that led to widespread outrage among Trump supporters. The Drudge Report and Rush Limbaugh reported on the tweet, and rumors that postal employees were destroying Trump ballots quickly went viral. A short time later, however, @randygdub re-tweeted a post including “hilarious audio of Rush Limbaugh falling for the … joke”:

Conservative media outlets were not the only ones to take the “joke” seriously though. The USPS responded to questions about the tweet by stating that an “initial investigation” had revealed that the author of the post did not actually work for the postal service:

That statement probably won’t curb widespread speculation and outrage, however. Copycat posts from so-called postal workers cropped up almost immediately. None of them have been proven true.