Summary of eRumor:
A 2008 video of President Obama aboard his campaign plane appears to show him flaunt an erection to female reporters seated in the rear of the plane.
The Truth:
Allegations that President Obama was knowingly or intentionally showing off an erection to female reporters back in 2008 can’t be proven based on this video alone.
A video published on a YouTube channel operated by The Incredible World on October 11, 2016, claims that CNN video shows Obama talking on the phone in the front of the plane while a woman holding a camera appears to giggle from the back of the plane. Then, while still speaking on the phone, Obama lifts his leg onto the armrest of a seat before he turns and continues the conversation.
A caption published with the video explains what many people believe they saw:

It’s not clear from that video, however, whether those claims are true or false. We were able to track down photos that a Getty photographer took while Obama was on that phone call, and the incident in question happened on May 7, 2008, after Obama boarded a campaign plane in Chicago. A higher-quality image of Obama while he spoke on the phone doesn’t appear to show him concealing anything in his pants — which is impossible to see from in low-quality of the video: 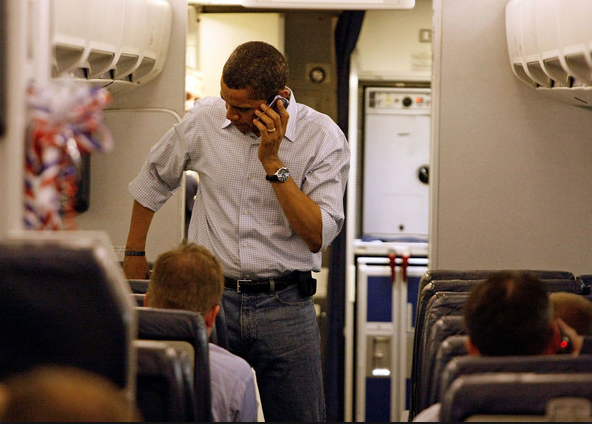 It’s also impossible to tell from the video who recorded it, or who is giggling in the background. It’s been said the video was shot by CNN, but that doesn’t appear to be true. First, the low quality of the video indicates that it was shot on a smartphone, not by a professional television cameraman. Second, earlier versions of the video posted on YouTube don’t who the “CNN” logo in the corner of the video, which indicates that it was likely edited into the video later on. Third, if CNN didn’t show the video on-air (and we haven’t been able to find proof that it did), then there would be no reason for the CNN logo to be added to raw, unused video.
And this video isn’t necessarily new, either. It was circulated among anti-Obama websites back in 2008 when it was first shot. Obami.com and other websites (most of which are no longer active) speculated about what the video showed and voiced outrage at it.
The video (and allegations) began circulating again during the 2016 presidential election after a 2005 video was released that captured Trump making lewd comments about women, and then several women came forward with allegations of unwanted sexual advances or sexual abuse against Trump. Grabien News, for example, used the video to argue that the press had treated Trump unfairly:

Donald Trump weathers a storm of controversy over randy comments he made to TV celebrity reporter Billy Bush in 2005, new video to emerge from the 2008 presidential campaign shows now-President Obama appearing to behave just as salaciously.

Aboard a campaign flight, then-Senator Obama is talking on a cellphone as he arises from his seat; nearby a female reporter catches a glance of something that makes her uncomfortable, sending her skirmishing to the back of the plane.

Obama, rather than downplay the awkward display, instead plays it up, positioning himself so the gathered reporters have little choice but to take in his chauvinistic performance.

Given that it’s not clear who shot the video, who is giggling in the background or what the video shows, we’re calling claims that Obama flaunted an erection at female reporters “unproven.”