In 2016, Queen Elizabeth offered to restore British rule over America and encouraged voters to write in her name in the 2016 election.

Thanks to the recurrent nature of social media, the idea of Queen Elizabeth II restoring British rule over the U.S. gained traction every so often prior to her death in September 2022.

In 2011, for example, a text meme that spread on Facebook was presented as a letter from the monarch to Americans informing the former colonies that because of their “tendency to elect incompetent presidents” and inability to manage their finances, American independence would be revoked.

Her Sovereign Majesty Queen Elizabeth II will resume monarchical duties over all states, commonwealths, and territories (except Kansas, which she does not fancy).

Your new Prime Minister, David Cameron, will appoint a Governor for America without the need for further elections.

Congress and the Senate will be disbanded. A questionnaire may be circulated sometime next year to determine whether any of you noticed.

In October 2015, English news outlets reported that an unidentified American man had actually requested that the Crown reclaim the United States in a letter, which read:

On behalf of the American people, I urgently implore you to take us back.

Clearly, the options we have to lead us aren’t up to par. Again, please, I beg of you, make the United States of America a colony of the United Kingdom.

For further reasons as to why this is such a necessary, albeit drastic, step, I refer to tonight’s Republican Party Primary debate. Thank you. God save The Queen.

A Reddit account posted a letter, written on Buckingham Palace letterhead, showing that the inquiry had actually received a response.

“I have been asked to write in response to your recent letter to The Queen in which you express your views about the American government,” the letter read. “”Whilst your views have been noted, you will appreciate, I am sure, that there can be no question of The Queen intervening in the affairs of another Sovereign state.” 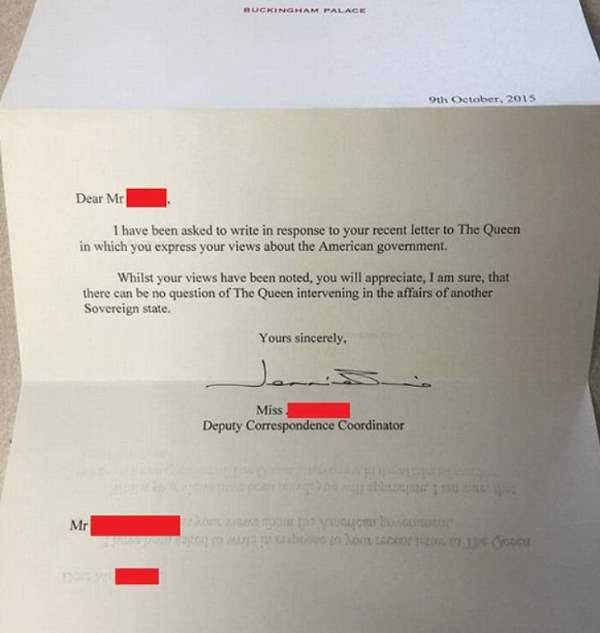 The account who posted the photo claimed that their “Anglophile friend” composed the “trolling” request to the queen.

“To our shock, they actually dignified him with a response,” they wrote; the Reddit post showing the letter reportedly received millions of views.

A year after the viral letter, satiricist Andy Borowitz framed the issue from the opposite perspective in a column for The New Yorker that, as his work often does, mimicked a news story about the queen offering to retake control of the U.S.:

Addressing the American people from her office in Buckingham Palace, the Queen said that she was making the offer “in recognition of the desperate situation you now find yourselves in.”

“This two-hundred-and-forty-year experiment in self-rule began with the best of intentions, but I think we can all agree that it didn’t end well,” she said.

The Queen urged Americans to write in her name on Election Day, after which the transition to British rule could begin “with a minimum of bother.”

As often happens to Borowitz, many circulated the story without realizing its author’s satiricall intent.

Queen Elizabeth died on September 8 2022 at her home in Scotland. She was 96 years old.