An image shows a rainbow view of the eye of Hurricane Dorian.

On September 1 2019, the following image purportedly depicting a rainbow in the eye of Hurricane Dorian appeared on social media: 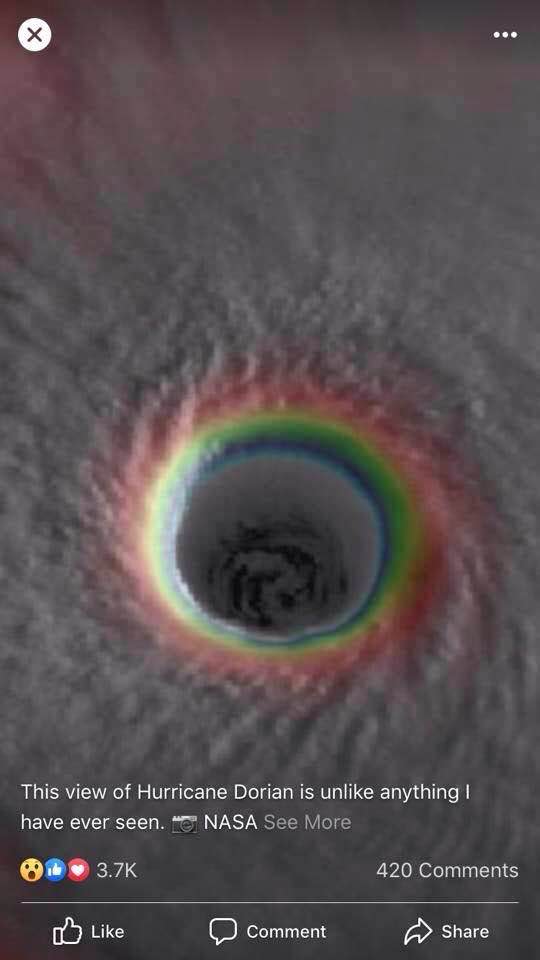 The post was shared more than 30,000 times in two days. An added caption read:

The commonly referenced “eye” and “eyewall” of a storm are defined by the Atlantic Oceanographic and Meteorological Laboratory in this way:

The “eye” is a roughly circular area of comparatively light winds and fair weather found at the center of a severe tropical cyclone. Although the winds are calm at the axis of rotation, strong winds may extend well into the eye … The eye is surrounded by the “eyewall”, the roughly circular ring of deep convection which is the area of highest surface winds in the tropical cyclone. The eye is composed of air that is slowly sinking and the eyewall has a net upward flow as a result of many moderate – occasionally strong – updrafts and downdrafts. The eye’s warm temperatures are due to compressional warming [of] the subsiding air.

Meteorological images of a hurricane’s eye are a common sight in any hurricane reporting; however, the circulating image appeared to captivate social media users thanks to what appeared to be a rainbow halo around the storm’s eye.

The Facebook post embedded above prominently featured a screenshot of a tweet, but identifying features such as its date and original poster were cropped out. The original tweet was sent by ABC Action News Meteorologist Denis Phillips on September 1 2019:

This view of Hurricane Dorian is unlike anything I have ever seen. 📷 NASA pic.twitter.com/ScbhTI9Gw3

Based on comments about the images, people seemed to think the rainbow Hurricane Dorian imagery was shown without additional satellite imagery:

Phillips’ original caption was intact in the Facebook post, and it read: “This view of Hurricane Dorian is unlike anything I have ever seen. 📷 NASA[.]” Phillips did not participate in any discussion about the context of the image on the tweet’s thread, but in a subsequent post on the same day, he shared an animated graphic with the same rainbow coloring:

Descriptions and captions added to the confusion by indicating the first image of Hurricane Dorian was “unlike anything” the meteorologist had ever seen; the second was simply labeled “insane.” Readers seemed to infer that the rainbow coloring seen in the images was naturally occurring, unlike other fairly monochrome Hurricane Dorian eye images shared to Twitter:

#HurricaneDorian as seen from @Space_Station earlier today. Hoping everyone in its path stays safe. pic.twitter.com/6vejLDPJHF

The Eye of #HurricaneDorian as seen today at 14:53:41 UTC by #Sentinel3’s #OLCI instrument in true colours
Wide view and zoom pic.twitter.com/1vOGoPLuET

Zoomed satellite imagery showing the eye of #HurricaneDorian. Truly an incredible look into the heart of this monster. #stormhour pic.twitter.com/0vPnduwvWD

The eye of Hurricane Dorian 🙈 good luck to everyone in its path, hope you come out the other side safe and well.

Earlier, we quoted the Atlantic Oceanographic and Meteorological Laboratory’s definition of a hurricane’s eye as a “roughly circular area of comparatively light winds and fair weather found at the center of a severe tropical cyclone.” A March 2008 AccuWeather article announced the addition of “new radar colors” to its existing color scale. In that post, blue was used for “light” precipitation, with reds and purples marking “heavy,” “severe,” and “extreme” precipitation.

In the viral rainbow Hurricane Dorian eye picture, the concentric coloring ranged from pale blue at the center to darker blue, then green, yellow, purple, and magenta or red. Juxtaposed with the definition of an eye as a center of “light winds” and “fair weather,” the image seemed to be overlaid with radar colors indicating a gradient of severe weather in and around Dorian’s eye.

Similar color coding is used on topographical maps by the National Weather Service, but for various conditions, events, and statuses; color is also used to represent variations in rainfall. An undated post on Weather Underground explained various facets of weather radar and maps, noting in a portion about Terminal Doppler Weather Radar (TDWR) that colors are used to highlight “storm features”:

The TDWR products are very similar to those available for the traditional WSR-88D NEXRAD sites. There is the standard radar reflectivity image, available at each of three different tilt angles of the radar, plus Doppler velocity of the winds in precipitation areas. There are 16 colors assigned to the short range reflectivity data (same as the WSR-88Ds), but 256 colors assigned to the long range reflectivity data and all of the velocity data. Thus, you will see up to 16 times as many colors in these displays versus the corresponding WSR-88D display, giving much higher detail of storm features. The TDWRs also have storm total precipitation available in the standard 16 colors like the WSR-88D has, or in 256 colors (the new “Digital Precipitation” product). Note, however, that the TDWR rainfall products generally underestimate precipitation, due to attenuation problems (see below). The TDWRs also have such derived products as echo height, vertically integrated liquid water, and VAD winds. These are computed using the same algorithms as the WSR-88Ds use, and thus have no improvement in resolution.

Colors on weather maps and satellite images are used in various ways:

There is a color key on the far right side of the map that demonstrates the color values either using icons (such as for precipitation type when viewing a radar layer) or data values (such as for temperatures). Please note that legends are enabled by default but can be turned off by disabling the Legends toggle within the Settings menu (lowest button on far left side of the map).

In the original tweet, NASA was credited as a source for the image. On August 30 2019, NASA issued a media advisory indicating the agency would be tracking Hurricane Dorian and suppling images and video as the storm progressed. That same day, Scientific American captured shared NASA satellite imagery of Dorian in an animated image — sans rainbow. NASA also shared video from the International Space Station (ISS) on August 29 2019 of Dorian.

On September 3 2019, a NASA blog post about Dorian satellite imagery featured different colorful maps, and a portion explained the colors:

IMERG, or the Integrated Multi-satellitE Retrievals for GPM (IMERG) data product is generated by NASA’s Precipitation Processing System every half hour with a 6 hour latency from the time of data acquisition. It is produced using data from the satellites in the GPM or Global Precipitation Measurement mission constellation of satellites, and is calibrated with measurements from the GPM Core Observatory as well as rain gauge networks around the world.

IMERG is an example of the research role that NASA has in hurricanes – developing observational tools and building computer models to better understand the behavior of tropical cyclones. NASA’s research data is utilized by NOAA’s National Hurricane Center (NHC) to enhance their forecasts.

NASA’s “Dorian 2019” tag led to two pages of blog posts and satellite images of the hurricane and its eye. Although the image in the tweet didn’t appear among those posts, a number of color-coded eye images were included. One was captioned with commentary indicating that the colors are infrared imagery:

At 1:58 am EDT (0558 UTC) Suomi NPP caught Dorian on the west side of the scan showing a well-defined eye that can be easily seen along with different cloud bands as well as a lone lightning strike within the storm in the southern portion. Infrared imagery also spotted tropospheric convective gravity waves flowing away from the intense storm. Credit: NASA/NOAA/UWM-SSEC-CIMSS/William Straka III

We were unable to locate the “rainbow Hurricane Dorian” image published by NASA, nor could we find an earlier iteration of the image. Nevertheless, the rainbow coloring of the depicted eye appeared to be the most compelling aspect of the storm, with several users interpreting it as a “rainbow” storm. Contemporaneous images of Dorian and its eye used rainbow coloring to indicate various storm features, but in a larger context the enhancements clearly presented as radar enhancements. The image is compelling to users because the radar color was interpreted as naturally occurring. However, the most likely explanation for the image was decontextualized use of color-coded or infrared imagery atop a standard image of a hurricane eye.

We contacted NASA and meteorologists to ask about the rainbow Hurricane Dorian image’s context, but we have not yet received a response.