Food bloggers write so much before the recipe because "recipes cannot be copyright protected unless accompanied by 'substantial literary expression.'"

On November 7 2021 a Facebook user shared a Tumblr screenshot addressing the case of the recipe anecdote, claiming that food bloggers share so many personal stories to accompany their instructions, because “recipes cannot be copyright protected unless accompanied by ‘substantial literary expression'”:

At the top of the screenshot was a September 2021 tweet by @HarleyShah with a relatable request:

Under that was a Tumblr post by u/ralfmaximus from November 4 2021:

That post addressed the verbosity of recipe bloggers, and claimed that their content was generally as long-winded as it is because “recipes cannot be protected unless accompanied by ‘substantial literary expression,'” and lamenting that said literary expression was not used more creatively:

There’s a reason for this: recipes cannot be copyright protected unless accompanied by “substantial literary expression”.

I’m sure a lot of recipe authors hate writing that crap too, but unless the polite fiction is maintained their work gets sucked up & monetized relentlessly by bots, without crediting or compensating the creator.

MY primary gripe is how boring the ‘anecdotes’ are. Why not write about werewolves instead? Where the only protection against the hideous slavering beasts are these scrumptious lemon blueberry tarts?

Or how this recipe was handed down by Cthulhu itself 20,000 years ago! But with certain ingredients mistranslated to avoid uttering forbidden words! And NOW, for the first time in recorded history–

Or how this recipe for chicken enchiladas absolutely defies replicator programming so we’ve time-travelled back to 2021 to obtain unborgified chicken DNA to resequence the replicators buuuuut since we’re here now, might as well have a copy of this awesome recipe…

Makes about as much damn sense as some of the crap I read on recipe sites.

The initial claim was fairly specific, sounding like an excerpt from case law, particularly the part in quotes. That language appeared on a March 2021 Copyright Alliance blog post, “Are Recipes and Cookbooks Protected by Copyright?”

It contained a section “Can You Copyright a Recipe?”, explaining:

There are rare times where the idea and the expression of the idea are so intertwined that there is only one way, or very few ways, to express the idea. When this is the case, that expression of the idea is not protected by copyright law. A recipe’s list of ingredients, or simple directions, is so intertwined with the idea of that recipe that there are very few ways to express this idea; so, a simple list of ingredients or simple directions will not usually be protected by copyright … [The United States Copyright Office Compendium] has also stated that a “simple set of directions” is uncopyrightable.

In the next section, “Elements of a Recipe That Can Be Protected By Copyright,” the author used the “substantial literary expression” phrasing, and offered that it was perhaps why food bloggers attach so much additional, generally personal information to their recipe:

Recipes can be protected under copyright law if they are accompanied by “substantial literary expression.” This expression can be an explanation or detailed directions, which is likely why food and recipe bloggers often share stories and personal anecdotes alongside a recipe’s ingredients.

That particular explanation seemed to scratch an itch among content-consuming recipe readers — it addressed a long-held and regularly aired lament about food bloggers blabbing for pages before disclosing the recipe. But it also was a rather sudden and new decisive answer to a question that had inspired countless memes over the years: 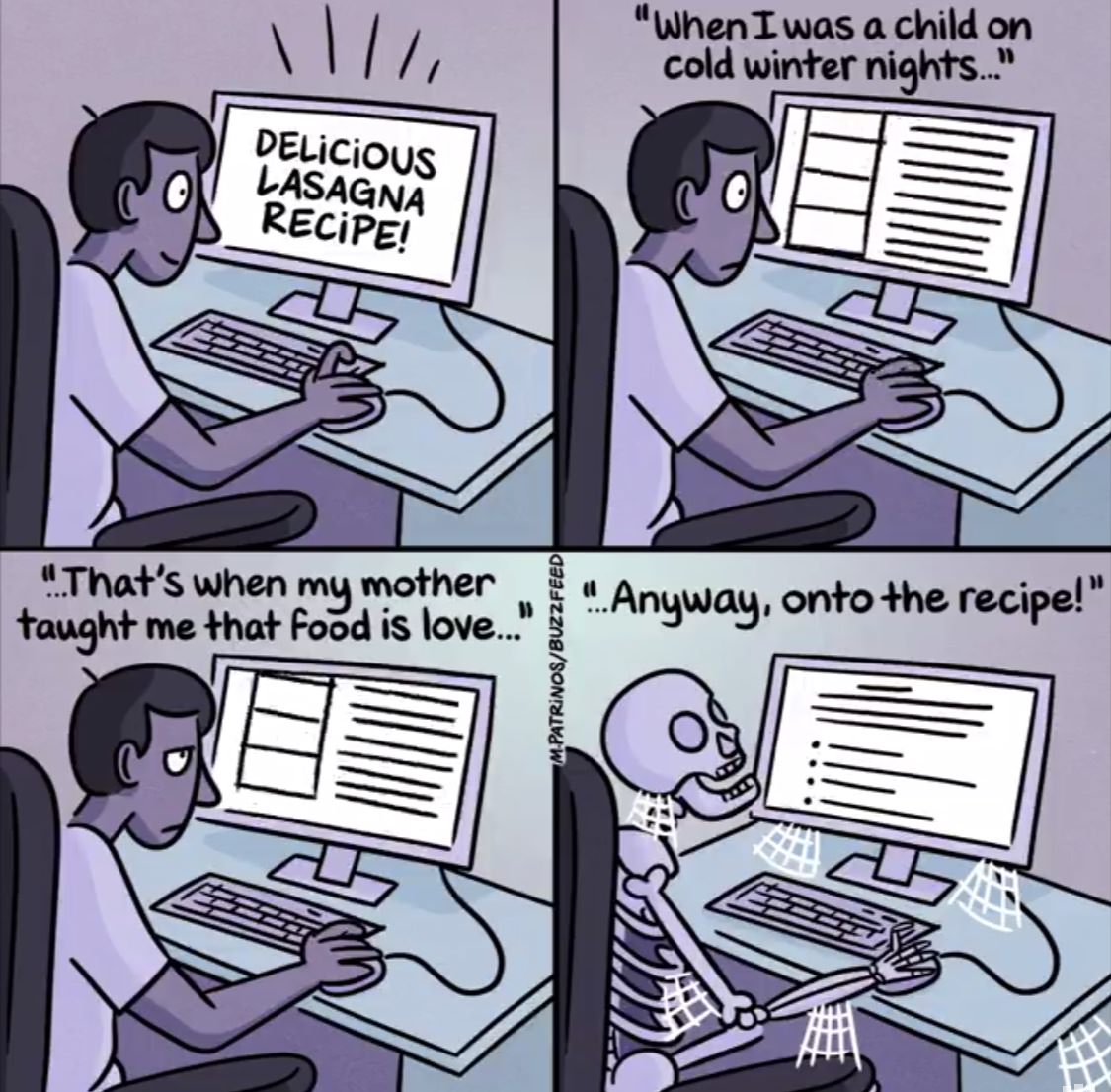 ME: Please, I beg you, just tell me the ingredients.

RECIPE SITE: After I explain WHY I love these ingredients—

RECIPE SITE: —It was a crisp, fall evening, and I, a wide-eyed college student, was studying in Rome.

Presumably, there would some sort of detectable legal pattern behind that claim, such as food bloggers getting ripped off and using their lengthy posts to enforce the rights to their content. But a search for food blogger lawsuits primarily dredged up just one 2017 legal action involving a food blogger’s snowglobe cupcakes and the Food Network, and it had nothing to do with the “polite fiction” of “substantial literary expression.”

Food52 described a very clear-cut instance of a recipe’s novel nature (creating “snow globes” out of gelatin), its runaway success, and its subsequent (and seemingly unauthorized) use by the Food Network — not on the air, but in direct competition with the original creator on the food blogger turf of Facebook:

In December of 2014, Elizabeth LaBau, the blogger behind SugarHero, posted a self-produced recipe for snow globe cupcakes with gelatin bubbles. As the name suggests, they’re cupcakes that resemble snow globes, made with transparent globs of gelatin. The recipe, she claims, is original, the result of an idea that’d been percolating in her mind. The post was a smash, congesting traffic on her site so much that it crashed.

LaBau is a full-time food blogger, and she relies on the stream of capital that her site provides to make a living. The post’s success translated to revenue, more than tripling her earnings that month. She made good on the post’s success with a handsomely-produced how-to video for the recipe, which she posted a full two years later in early December of 2016. The video amassed 12,000 likes and 114,000 shares on Facebook.

Suspecting search engine optimization and Google’s preferred practices had more than a little influence on the manner in which food bloggers served recipes, we asked digital media expert James Kosur to weigh in on the viral Tumblr post about food bloggers and “significant literary expression.” Kosur, who has two decades of experience working with content, ads, and Google, explained how content creators balance their approach with search engine preferences.

Kosur referenced “keyword stuffing” (for example, tweets consisting solely of Twitter’s trending topics), and detailed the benchmarks with which any publisher of written content is likely aware:

In general, long-form content is preferred by Google in order to rank higher in search results. Food bloggers will often target certain keywords and use those keywords throughout their recipe-based content. When writing content, it’s a common practice to target a keyword and oftentimes secondary and even tertiary keywords. You need to use those keywords multiple times to rank for those keywords. At the same time, the content needs to be long enough that the keywords are not over used in relation to the total number of words written, this helps avoid keyword stuffing which is frowned upon by Google.

It’s more likely that food bloggers are aware of search engine optimization (SEO) than they are with DMCA (copyright) law, and are focused on writing content that ranks. The claim in this post makes no sense to me since many recipe sites use the recipe schema markup (https://schema.org/Recipe) which can easily be scraped only for the recipe, which isn’t protected by copyright law … At least which I don’t believe (Schema) would be protected by copyright law if recipes in general are not, but I’m not a lawyer.

Kosur’s analysis aligned with that of a December 2020 post (“Why are food blog recipes so long?”) from BoldType.us, a content consultancy firm:

Eventually, you find [the recipe], and after that initial moment of frustration, you move forward with your meal. But that moment of frustration has spawned an extensive debate over the purpose and structure of food blogs. The problem of the food blog is so ubiquitous, it’s become a cliche. The internet is strewn with comics and viral tweets complaining about the endless scroll. But these pithy critiques obscure a complex communication problem.

Food bloggers use long-form content because it improves their search engine optimization (SEO). While SEO depends on many intersecting metrics, experts maintain that long-form content corresponds to higher search rankings. Search engines assume that web pages with longer content are more likely to fully answer a user’s question. Because of this, SEO strategies can directly contradict user preferences for more concise and scannable content.

Search engines also reward original content (and penalize what experts call duplicate content). As many have pointed out, recipes tend to be copied and shared. That recipe for zucchini bread might be almost exactly the same across ten different blogs. But the addition of original long-form narrative content—called headnotes—boosts its SEO.

Social media news site Mashable.com addressed the “food bloggers are long-winded” meme in 2019, ascribing the discussion to a battle between creative intent and efficiency. Later on, the site added:

There’s also a more technical element at play where recipe narratives are concerned: search engine optimization (SEO). Recipe bloggers want to catch the attention of the illusive Google algorithm — and, ideally, land their recipe on the coveted first page — so they must demonstrate “authority” in their field. This means more comprehensive content, which is really hard to pull off with a concise recipe alone. (Tons of people will be using the phrase “apple crumble,” for example, but only you can write your own story about it.)

“When I’m writing, I try to tell a story that has a hook as well as please[s] the Google algorithm,” [food blogger Cadry] Nelson said. “I do keyword research … I see what kinds of questions people have around the topic, and look for ways to anticipate their problems, and answer their questions, so that they will have a successful cooking experience. Lately, I’ve been adding more step-by-step pictures of how to make dishes, as well as videos, because Google says that readers want that.”

Another site, KitchenTreaty.com, cited the increase in mobile readership as a factor in the backlash against scrolling endlessly to the recipe. CulinaryLore.com blogged about the debate, introducing the matter of the advertising revenue which enables food bloggers to ply their trade in the first place:

You see, having a successful blog requires what the industry calls SEO (Search Engine Optimization). So, you have to include much more rich information in the headnotes of a recipe page. This information can include all sorts of things. The process of making the recipe, other tips on ingredients or storage, serving recommendations, wine recommendations (or beer), and, yes, personal stories or memories related to the dish.

But, also, we have to consider all those ads. As you peruse CulinaryLore you will notice ads being displayed. Those ads will tend to show up in the same places and, hopefully, not be intrusive or annoying (something many food bloggers need to note). However, if one of my articles is only a paragraph long, or, if I simply display a recipe with no introduction, there will not be any physical space for those ads. Therefore, my ability to make money and basically, be paid for my work will suffer. So, food bloggers need to allow the physical space and format for ads and other promotions to appear.

In short, the question of why food bloggers “write so much” and don’t just “get to the recipe” has long been a meme in its own right. Originally, the question of why food bloggers tacked a recipe on the end of a lengthy post about snow days or garage sales was somewhat rhetorical, an observation of a common feature that puzzled and often annoyed readers.

A November 2021 Tumblr reply claiming food bloggers used “substantial literary expression” to prevent their recipes from being ripped off checked many boxes in resolving the seemingly open question, but a cursory search for meaningful application of the “significant literary expression” concept to protect copyright came up short. Digital media experts explained the technical factors that food bloggers face in vying for views in the competitive arena of search ranking, and food writers themselves cited the same structures influencing their work. While a copyright advocacy group indicated that “significant literary expression” could insulate a difficult to copyright recipe, the less direct reason — that Google favors long-form, detailed, unique content — was the most common explanation provided by digital media managers and food bloggers themselves.