Members of the Royal British Legion have been barred from selling poppies to commemorate Remembrance Day in certain areas for fear of "upset minorities."

An enduring piece of misinformation surrounding the Remembrance Day holiday and the Royal British Legion charity group resurfaced again in September 2019, despite the best efforts of fact-checkers the last few times the same exact disinformation appeared.

One Facebook user amassed several thousand shares on the platform for regurgitating the long-debunked lie that members of the legion would not sell the commemorative poppy flowers “because some minorities say that it will upset them.” 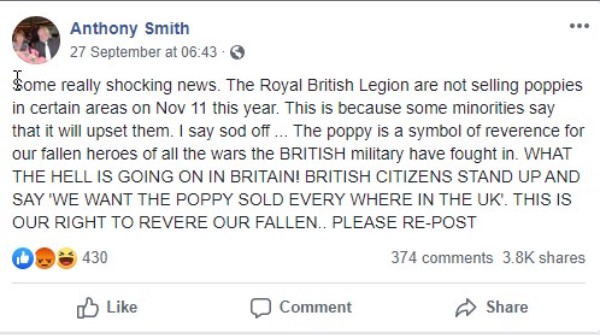 Some really shocking news. The Royal British Legian are not selling poppies in certain areas on Nov 11 this year. This is because some minorities say that it will upset them. I say sod off … The poppy is a symbol of reverence for our fallen heroes of all the wars the BRITISH military have fought in. WHAT THE HELL IS GOING ON IN BRITAIN! BRITISH CITIZENS STAND UP AND SAY ‘WE WANT THE POPPY SOLD EVERY WHERE IN THE UK’. THIS IS OUR RIGHT TO REVERE OUR FALLEN.. PLEASE RE-POST

Far from being “shocking news,” the post is a claim that has been debunked many times, by many news outlets, for many years. It even recalls the equally xenophobic — and also thoroughly debunked — rumors about so-called “no-go zones,” where even trained law enforcement supposedly fears to tread, because certain ethnic groups have purportedly taken over specific areas. As we have already reported, this has not happened, and in fact the person who first made the claim has since apologized:

Rumors of “no-go zones” throughout Europe have frightened many a far-right activist, at least judging by the amount of false stories that they seem to exhaustively share about such areas without any evidence to back up claims that they even exist.

There is no evidence that they exist, because “no-go zones” are nothing more than a myth spun up and perpetuated by individuals who are presumably too nervous about going to these purported zones to see for themselves.

Stories about these “no-go” areas were floating around on the fringes for years before they were brought into the mainstream by an American Fox News pundit named Steven Emerson, who made the claim on Fox News on January 11, 2015, just after an attack on the offices of French satirical publication Charlie Hebdo in which twelve people were murdered.

For his part, Emerson issued an apology on his website and explained that he had used unreliable sources in making his comments about Birmingham:

I have clearly made a terrible error for which I am deeply sorry. My comments about Birmingham were totally in error. And I am issuing this apology and correction for having made this comment about the beautiful city of Birmingham. I do not intend to justify or mitigate my mistake by stating that I had relied on other sources because I should have been much more careful. There was no excuse for making this mistake and I owe an apology to every resident of Birmingham. I am not going to make any excuses. I made an inexcusable error. And I am obligated to openly acknowledge that mistake. I wish to apologize for all residents of that great city of Birmingham.

As the Royal British Legion told the British site FullFact:

We are aware that there are statements online suggesting the poppy is not being offered in certain areas of the country. We’d like to reassure you that this is categorically untrue. We are proud to offer the poppy in every community in the UK — we always have been and always will be.

Another fact-checking site, ThatsNonsense.com, broke down the nature of the lie in September 2015:

Numerous variations of the above messages have circulated previously, but none of the them have been able to support their spurious claims that the Royal British Legion have ever been prohibited from selling poppies in any part of the UK because of causing offence to minorities.

Such messages are an extension to the on-going far right narrative that claims ethnic minorities are destroying or diluting British culture, forcing their own own culture onto British people, or forcing British people to compromise on their own traditions or values. However, this narrative often relies on misinformation and propaganda to spread, and this is definitely the case with the above message concerning poppies.

The significance of the poppy as a way to honor fallen service members dates back to World War I, when John McCrae, a lieutenant colonel in the Allied forces, noticed the bright red flowers continuing to bloom amid the fighting across France and Belgium. As the History Channel reported:

McCrae wrote a poem, “In Flanders Field,” in which he channeled the voice of the fallen soldiers buried under those hardy poppies. Published in Punch magazine in late 1915, the poem would be used at countless memorial ceremonies, and became one of the most famous works of art to emerge from the Great War. Its fame had spread far and wide by the time McCrae himself died, from pneumonia and meningitis, in January 1918.

McCrae’s poem sparked campaigns of solidarity in the United States, France, and throughout the United Kingdom. Shortly after forming in 1921, the Royal British Legion sold nine million poppies as part of a fundraising drive for housing and jobs for veterans. Since then they are worn every November 11, a holiday known as Armistice Day or Rememberance Day in several countries.

“Wearing a poppy is still a very personal choice, reflecting individual experiences and personal memories,” the group said on its website. “It is never compulsory but is greatly appreciated by those who it is intended to support.”

However, the rumors about “angry minorities,”which are as perennial now as many poppy species, are nothing more than disinformation and lies which emerged out of white supremacist far-right fever swamps, were laundered of their origins by groups such as UKIP and the Brexit Party, and are routinely pushed on the public by activists and politicians who personally or politically benefit from widespread xenophobia.