British tabloid The Mirror reported the claims of a satirical March 2022 tweet ("Russia reportedly asked North Korea for help with its failing invasion. North Korea responded, 'You are too insane for us'") as news.

On March 16 2022, an Imgur screenshot of a tweet by @XSovietNews suggested that a British tabloid (specifically, The Mirror) wrote an entire news story about Russia’s invasion of Ukraine based solely on a single satirical post to social media: 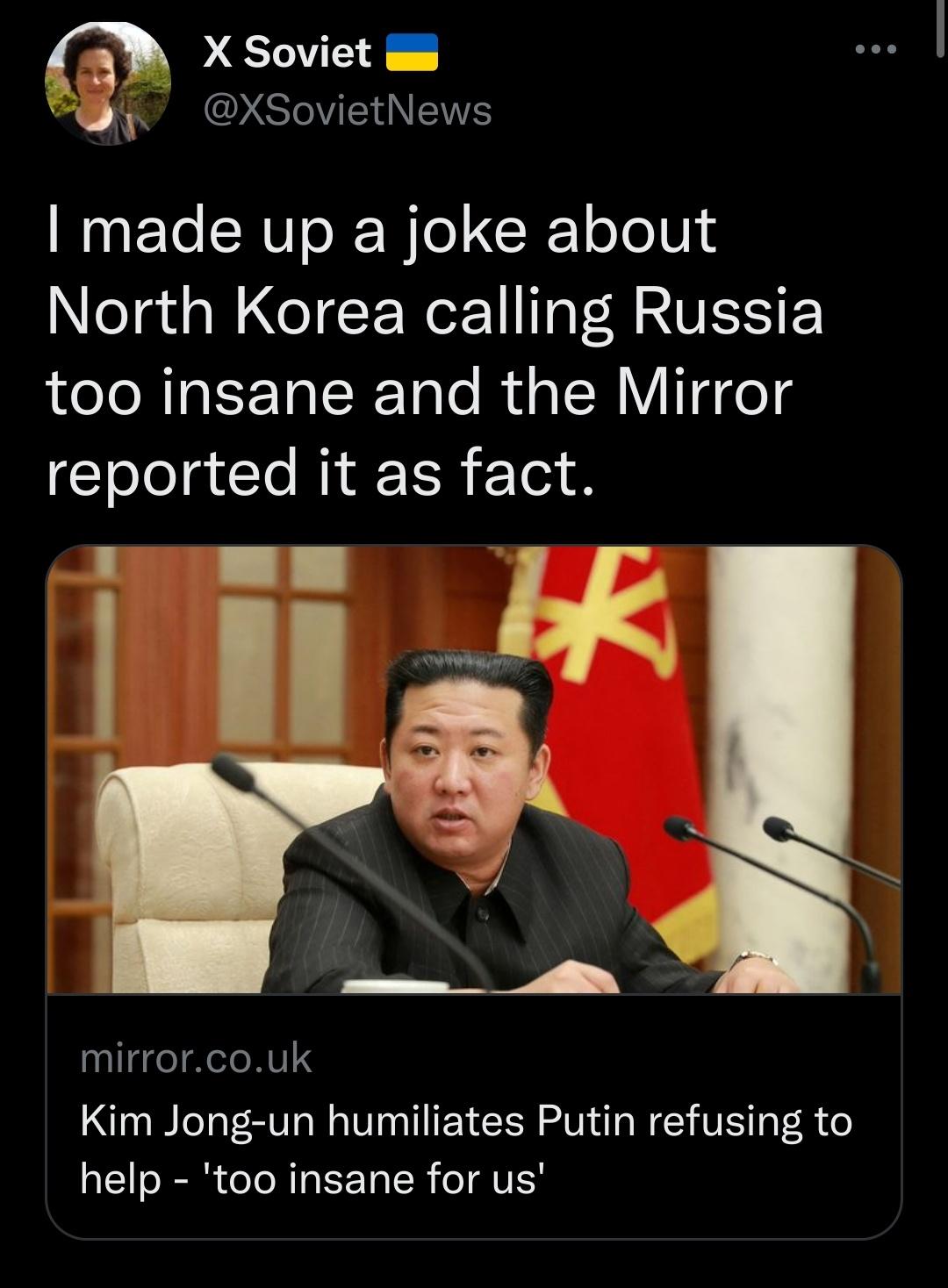 No date was visible on the screenshot, and the Imgur submitter did not link to the tweet, which was published by Twitter account @XSovietNews (journalist Sarah Hurst) on March 15 2022:

I made up a joke about North Korea calling Russia too insane and the Mirror reported it as fact. https://t.co/ZMd40319en

Russia reportedly asked North Korea for help with its failing invasion. North Korea responded, “You are too insane for us.”

The second tweet included a link to a Mirror.co.uk address, but clicking through to it returned a 404 “page not found” error. However, the URL had been archived numerous times, and the archived story matched the link in the tweet.

North Korea’s Kim Jong-un has reportedly denied Vladimir Putin help with his invasion of Ukraine, telling him that Russia is “too insane”.

The allegation comes as Russia’s invasion of Ukraine reaches stagnation, with reports of a furious Vladimir Putin considering turning to ‘plan B’ – non-conventional weapons.

Russia claims to have secured the entire Kherson Oblast (region) after first seizing the city two weeks ago.

But Ukrainian defenders remain defiant and continue to score tactical victories on the ground.

It comes as a further 370 Russian individuals and entities have been hit by sanctions, the UK Government has announced.

Reports have emerged showing Russia has lost up to 13,500 troops in the conflict, along with a host of hardware assets.

The position has forced Moscow to reach out to its friends abroad, The Express reports … Kim was quick to deny Putin assistance, according to XSoviet-News author Sarah Hurst.

“The Express reports” was hyperlinked, once again pointing to a missing page. As was the case with the Mirror item, the Express article (“‘Too insane for us’ Kim humiliates Putin after Russia begs North Korea for help”) was also archived.

The allegation comes as the Russian invasion of Ukraine is reaching stagnation as Putin’s forces are met with strong resistance by Ukrainian soldiers. Reports have emerged showing Russia has lost up to 13,500 troops in the conflict, as well as a host of hardware assets, forcing Moscow to reach out to its friends abroad.

In the deleted article’s subsequent content, the tweet @XSovietNews described as a joke was cited as the source for the claim:

According to Sarah Hurst, Author of XSoviet-News, President Kim was quick to deny Putin assistance.

Writing on Twitter she claimed: “Russia reportedly asked North Korea for help with its failing invasion.

“North Korea responded, ‘You are too insane for us’.”

This has not been verified by other sources.

A March 16 2022 Imgur post featured a tweet claiming that journalist @XSovietNews “made up a joke about North Korea calling Russia too insane and the Mirror reported it as fact.” The tweet included a broken link to Mirror.co.uk, but several archived copies of the page remained accessible. Before it was deleted, its content cited and linked to an Express.co.uk article — which also disappeared. Both URLs were archived, and both cited @XSovietNews as a source for their claims.