On February 20 2019, the Facebook page Pictures in History shared a version of the photograph of a chairlift seen above simply captioned: “Safety standards in the 1960s.”

The photograph was not new to the internet, and the meme-style version here was shared to me.me in November 2018 and by BoingBoing in September 2018. That same photograph was accompanied by the following text:

Prior to all the PC BULLSHIT, WE SURVIVED on common sense and lotsa luck!

Underneath that photograph was an additional caption, “we survived,” with both captions heavily implying that the events depicted here would never occur in a safety-crazed and “politically correct” 2019 climate. In the background of the photograph, a scoreboard-type sign reads “SNOW KING CHAIRLIFT, JACKSON HOLE, WYO.” On the sign, the date is displayed as June 28, 1965.

Other iterations of the same photograph appeared on Reddit’s r/wyoming in and r/sweatypalms in September 2018, and on r/OldSchoolCool in June 2018. Interestingly, comments in all three threads fell along similar lines: people with aversions to heights expressing an unpleasant reaction to the photograph, and people familiar with skiing perplexed that so many users were unfamiliar with the conventions around using chairlifts in both 1965 and 2019:

Doesn’t seem like there are many skiers on this thread. Everyone on here is acting like this is really dangerous.

Its a chair lift. It is probably the safest part of skiing and the modern ones are about the same but they have a safety bar that is used maybe half of the time.

You do realise that it’s not that far off of the ground? Mountains are sloped and lift chairs follow this slope. The background looking so far below is a matter of forced perspective.

As noted, the device shown was not some long-lost contraption absent completely from lawsuit-happy modern day American life. Chairlifts are exceptionally common at ski locales (such as in Jackson Hole, Wyoming) and largely rely on a lack of restraints to be useful in their primary function:

An elevated passenger ropeway, or chairlift, is a type of aerial lift, which consists of a continuously circulating steel cable loop strung between two end terminals and usually over intermediate towers, carrying a series of chairs. They are the primary onhill transport at most ski areas (in such cases referred to as ‘skilifts’), but are also found at amusement parks, various tourist attractions, and increasingly in urban transport.

Safety bars are sometimes used on chairlifts, but not always. Their presence arguably interferes with the primary application of chairlifts in their contexts — enabling riders to enter them and, a few minutes later, disembark onto ski slopes with ease:

Pretty much all double chairs don’t have safety bars. That’s normal all over the country. Triple chairs are hit and miss, maybe half have a safety bar built in.

Another Reddit user recounted an amusing tale of parental sangfroid involving chairlifts, except for the fact that the anecdote was from the late 2010s, not the 1960s. It involved dangling a five-year-old by his jacket after the child attempted to exit the chairlift prematurely:

Note: When preparing to get off, my 5-year-old son scooted too far forward too early and almost dropped about 15 feet to the snowbank below but I grabbed the back of his coat and he just hung there for the few seconds it took to get to the unload area. I don’t think he would have damaged anything if he fell, but it woulda scared him pretty good. The dad-bar worked.

Youth skiing safety website KidsOnLifts.org featured a Frequently Asked Question page that addressed both the overall safety of chairlifts (even for children), as well as the presence of lack of safety bars:

There are various types of lifts such as T-bars, conveyors, gondolas, etc. The loading process and responsibilities are similar regardless of the style of lift.

Immediately following a comment in the r/Wyoming thread of “vintage! I love it!” was a separate user’s link to what appeared to be the same chairlift in operation in August 2018. That chairlift did appear to feature a restraint bar, but again, such a feature was designed to still enable riders to jump from ski lifts at higher points on the mountain. Simply put, the chairlift’s sole function was to allow people to ride to higher altitudes without the burden of having to climb a mountain with skiing or snowboarding equipment.

A second user shared a more recent photograph of riders on the same chairlift, describing the angle shown in the 1965 photograph as “deceiving”: 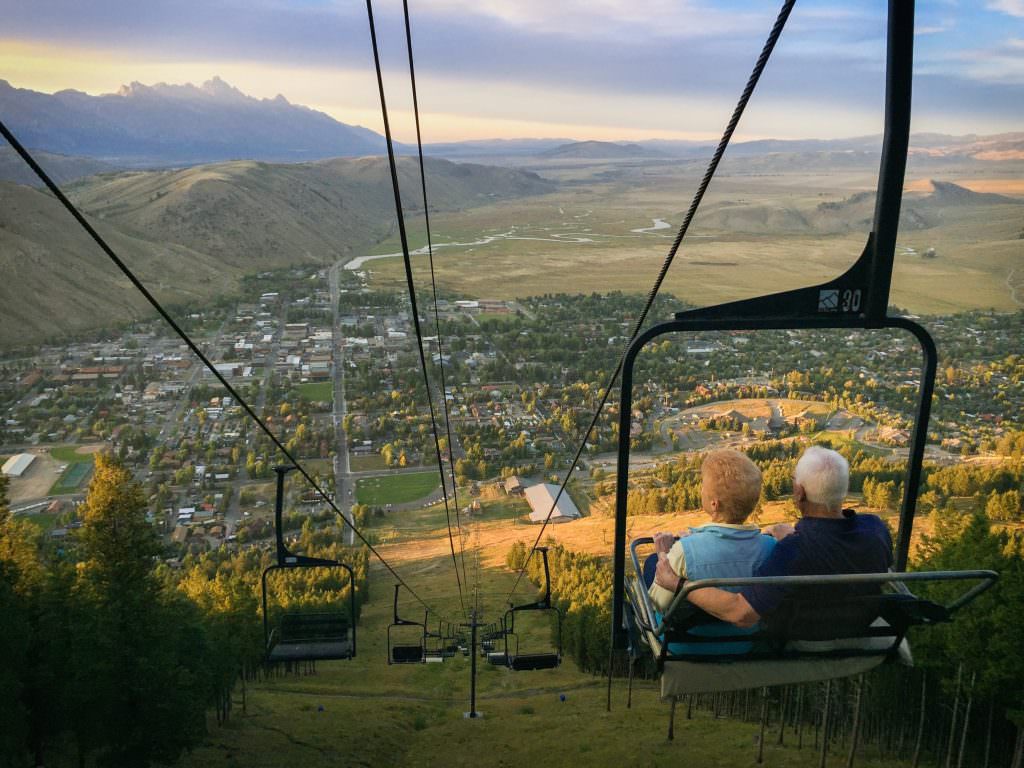 Like many viral vintage images, the Snow King chairlift photograph spread in part due to a projective narrative that the freewheeling 1960s were a liability-free time of nonstop fun before political correctness and litigious lawyers stepped in to put a stop to it all. But that spin on the image relies on what appears to be a basic lack of awareness that chairlifts and the ability to hop off them on tall mountains is an integral part of the skiing experience, is still common, and is an activity in which parents and toddlers still engage. Although the chairlift may have since been modified to include a restraint bar, the basic function of chairlifts is to enable humans to jump onto them so that they can ride to and then slide down the tops of icy, slippery mountains.