A Twitter account that had gained visibility within academic circles on the platform was suspended on August 3 2020 amid a maelstrom of skepticism of its legitimacy and well as criticism toward the user suspected of creating the account as well as the fake identity behind it.

A spokesperson for the platform confirmed to us that both the eponymous @Sciencing_Bi account and another user, Dr. BethAnn McLaughlin, were suspended from Twitter for breaking the rules regarding “platform manipulation and spam.” According to the site, violations include operating fake accounts; operating multiple accounts that interact with one another; and “use of intentionally misleading profile information, including profile location.”

As Heavy.com reported, the @Sciencing_Bi account did not identify themselves by name but described themselves as a bisexual Native American professor at anthropology at Arizona State University (ASU). But after years of interacting with other Twitter users via direct messages and being portrayed online as close to McLaughlin, @Sciencing_Bi began accusing the university of forcing them to continue teaching in person amid the COVID-19 pandemic.

“ASU kept teachers, staff and students on campus until April. That’s well after we knew this was a killer disease. Many got covid. Including me,” read one post from the account in May 2020.

In late July, she claimed in a thread (that has since been deleted) that she tested positive for the virus and hospitalized while doubling down on the allegations of mistreatment by ASU.

“My state university just cut my salary by 15 percent,” the thread read before it was taken down. “They also kept my school open and me teaching well past when they knew it was unsafe to be in crowds. No. I won’t answer questions. I don’t have tenure.”

On July 31 2020, McLaughlin “reported” on her account that @Sciencing_Bi had died. However, other Twitter users noted that the university had not posted any statements acknowledging the passing of a faculty member. An ASU spokesperson told us:

We have been looking into this since this weekend and cannot verify any connection with the university.

We have been in touch with several deans and faculty members and no one can identify the account or who might be behind it.

Some of the past commentary this person posted is questionable, such as teaching in April. ASU went fully remote in March. The person also mentioned salary reductions. We have not implemented any salary reductions here.

McLaughlin also hosted an online memorial for @Sciencing_Bi (or “Alepo,” as they also also identified themselves) that allegedly drew several other users who had interacted with the account online — but not in person. Yet McLaughlin later seemingly attempted to distance herself from the account; when contacted by the Arizona Republic to comment on their “death” and claims of working for ASU McLaughlin replied, “To the extent that I have people engage with me on Twitter using accounts not associated with their names, I try to do that in good faith assuming they are authentic.”

But McLaughlin’s descriptions of “Alepo” leading up to that point portrayed a personal relationship between herself and a person behind the @Sciencing_Bi account, which was created in 2016. As other Twitter users pointed out before both McLaughlin and “Alepo” were suspended, McLaughlin publicly mourned them on her own account and claimed that “Alepo” had sent her and two other friends Hopi Tribe bandannas:

Looking at her side of the bed and crying. Just a lot of crying. I literally can do nothing. No services. I can’t get to her stuff [because] of quarentine. [sic] Just crying and reading texts. I’m Zooming w students tonight. I don’t want to be the grown up tonight Steve. 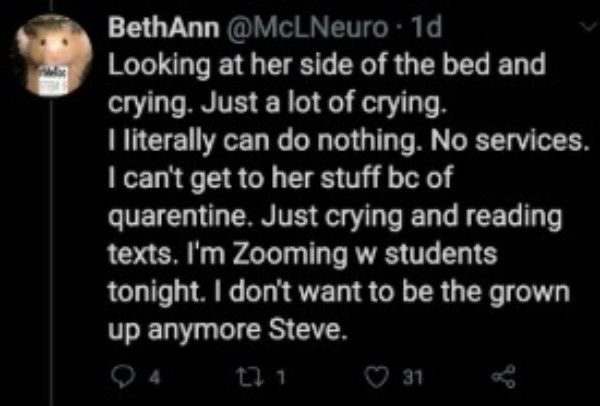 Twitter users also recirculated a photo McLaughlin posted in 2018 with a caption claiming that @Sciencing_Bi was with them on a boating excursion. 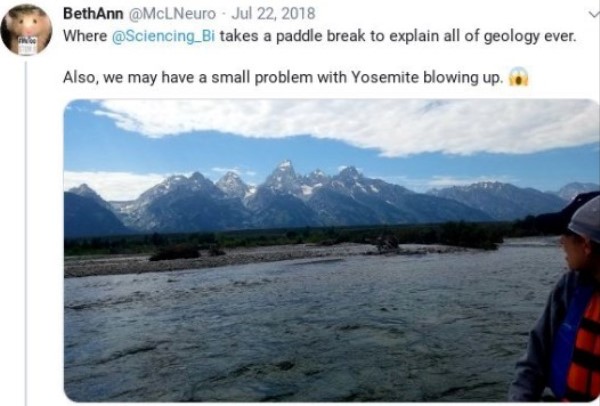 McLaughlin, a former assistant professor of neurology at Vanderbilt University, had previously gained public attention when she founded MeTooSTEM in June 2018. The non-profit group promotes itself on its website as “an advocacy network that provides legal, safety, professional, health and community support.”

But several members of the group’s leadership ranks resigned in both 2019 and 2020 saying that McLaughlin withheld information from members and minimized concerns raised by women of color.

“We misunderstood the complaints of former volunteers as interpersonal disputes. We deeply regret this and are focused on making amends,” governing board members Angela Rasmussen and Teresa Swanson said in a February 2020 letter announcing their resignations.

However, by far the person who has done the most harm is BethAnn McLaughlin herself. We resigned in part because of BethAnn’s refusal to be accountable for the pain she caused to others and to us. It is unconscionable and cowardly that a ‘leader’ of this movement remains silent when there are so many people suffering because she will not take responsibility for her abuse and the damage she has caused.

The group responded to the resignations of Swanson and Rasmussen with a statement noting that the remaining leadership board members supported McLaughlin. However, MeTooSTEM’s website currently only lists McLaughlin under its “Leadership Team” heading. The MeToo STEM Twitter account remains active though “restricted.”

We emailed MeTooSTEM asking McLaughlin about her response to the Republic, as well as allegations that she not only created the @Sciencing_Bi account, but that donations via Venmo for “Alepo” were instead redirected to her own account on that site.

“My Venmo account got about $90 in donations for drinks which were returned to the individuals with apologies,” she told us. She did not address any of our other questions.