On January 18 2022, an Imgur account shared a screenshot of Sen. Marco Rubio (R-Florida) quoting Dr. Martin Luther King, Jr., as well as a quoted tweet by Rep. Val Demings (D-Orlando) telling Rubio that he had interfered with voting rights: 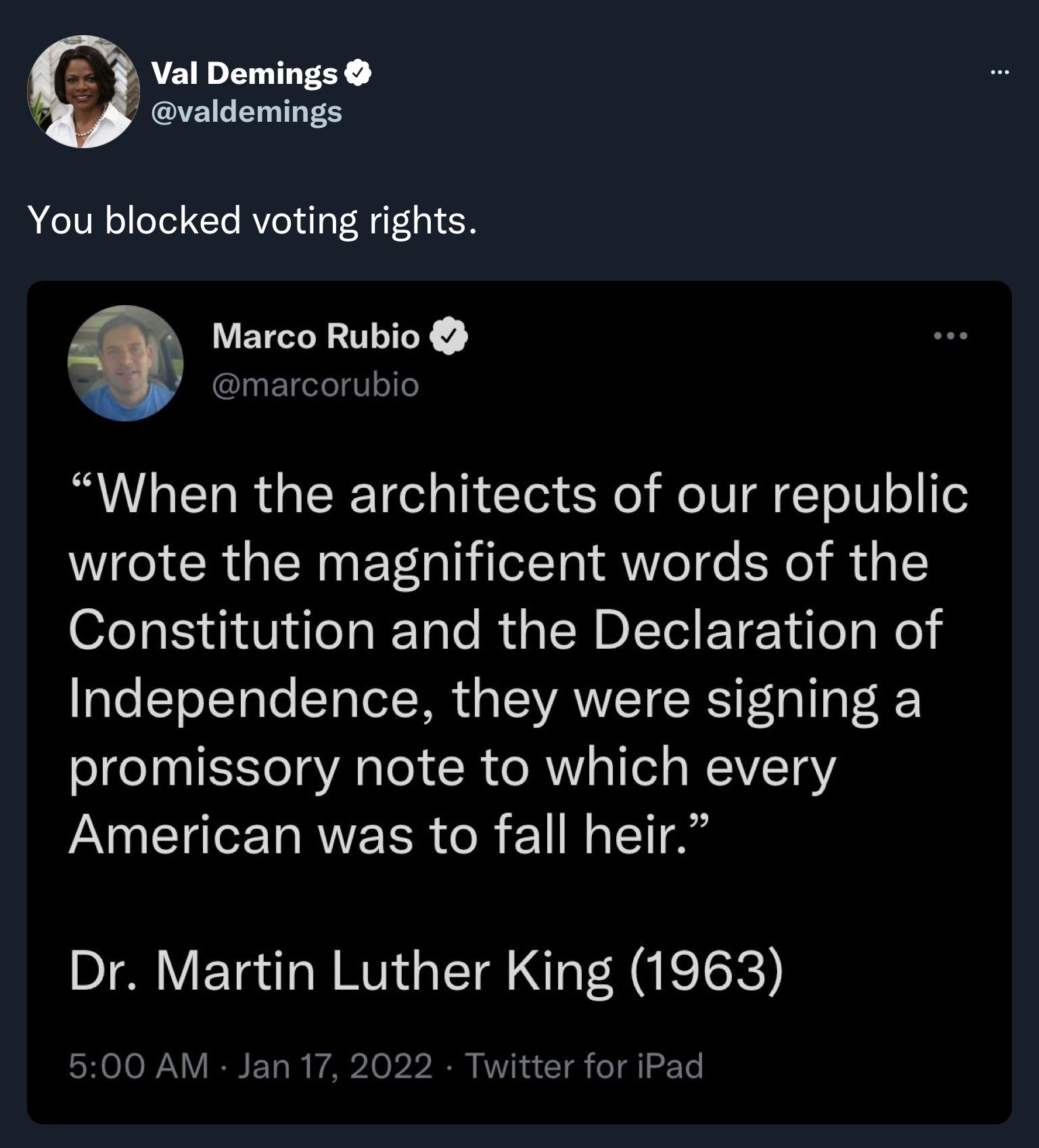 “When the architects of our republic wrote the magnificent words of the Constitution and the Declaration of Independence, they were signing a promissory note to which every American was to fall heir.”

Rubio’s tweet contained what was described as a King quote from 1963:

“When the architects of our republic wrote the magnificent words of the Constitution and the Declaration of Independence, they were signing a promissory note to which every American was to fall heir.”

Rubio’s date (1963) and the quote did align with part of King’s “I Have a Dream” speech, which was delivered on August 28 1963. As observed by those participating in the discourse, the quotation could be viewed as somewhat misleading in its complete context.

Twitter’s character limit could be partly to blame, but we have emphasized Rubio’s MLK quote and King’s commentary immediately thereafter:

Five score years ago, a great American, in whose symbolic shadow we stand signed the Emancipation Proclamation. This momentous decree came as a great beacon light of hope to millions of Negro slaves who had been seared in the flames of withering injustice. It came as a joyous daybreak to end the long night of captivity.

In a sense we have come to our nation’s capital to cash a check. When the architects of our republic wrote the magnificent words of the Constitution and the Declaration of Independence, they were signing a promissory note to which every American was to fall heir. This note was a promise that all men would be guaranteed the inalienable rights of life, liberty, and the pursuit of happiness.

It is obvious today that America has defaulted on this promissory note insofar as her citizens of color are concerned. Instead of honoring this sacred obligation, America has given the Negro people a bad check which has come back marked “insufficient funds.” But we refuse to believe that the bank of justice is bankrupt. We refuse to believe that there are insufficient funds in the great vaults of opportunity of this nation. So we have come to cash this check — a check that will give us upon demand the riches of freedom and the security of justice. We have also come to this hallowed spot to remind America of the fierce urgency of now. This is no time to engage in the luxury of cooling off or to take the tranquilizing drug of gradualism. Now is the time to rise from the dark and desolate valley of segregation to the sunlit path of racial justice. Now is the time to open the doors of opportunity to all of God’s children. Now is the time to lift our nation from the quicksands of racial injustice to the solid rock of brotherhood.

It would be fatal for the nation to overlook the urgency of the moment and to underestimate the determination of the Negro. This sweltering summer of the Negro’s legitimate discontent will not pass until there is an invigorating autumn of freedom and equality. Nineteen sixty-three is not an end, but a beginning. Those who hope that the Negro needed to blow off steam and will now be content will have a rude awakening if the nation returns to business as usual. There will be neither rest nor tranquility in America until the Negro is granted his citizenship rights. The whirlwinds of revolt will continue to shake the foundations of our nation until the bright day of justice emerges.

But there is something that I must say to my people who stand on the warm threshold which leads into the palace of justice. In the process of gaining our rightful place we must not be guilty of wrongful deeds. Let us not seek to satisfy our thirst for freedom by drinking from the cup of bitterness and hatred.

King indeed referenced within the Constitution and Declaration of Independence a “promissory note to which every American was to fall heir.” He added that it was “obvious today that America has defaulted on this promissory note insofar as her citizens of color are concerned,” and that instead of “honoring this sacred obligation, America has given the Negro people a bad check which has come back marked ‘insufficient funds.'”

Although the quote was accurate, Rubio’s shortened version arguably misrepresented the true meaning of King’s complete commentary on the “promissory note.”

In response to Rubio, Demings addressed his purported record on voting rights, but she did not name a specific vote.

A search for Rubio’s actions turned up articles on Florida state political news site TheFloridaPhoenix.com from October and November 2021. The first, “U.S. Senate Republicans again block debate on voting rights legislation,” reported that Rubio joined fellow Republicans in blocking advancement of the “Freedom to Vote Act” (which can be read here):

The Freedom to Vote Act would make Election Day a national holiday and set minimum standards each state must have for elections, including two weeks of early voting and an option for same-day voter registration.

Supporters of the legislation say it is necessary to protect American democracy from a recent push to restrict voting access.

But the 49-51 vote along party lines—with Schumer voting in opposition for procedural reasons—demonstrates the challenge Democrats face to advance their agenda in the evenly divided Senate. They need 60 votes and support from Republicans to get past a filibuster and move to debate and a vote on a bill.

Even after moderate Democrats made concessions, no Republicans were willing to let the bill advance and for now it is stalled.

The failure likely will encourage those who want to change the Senate’s filibuster rule.

Republicans in the U.S. Senate on [November 3 2021] blocked another voting rights bill, this one named for Georgia civil rights icon John R. Lewis.

On a 50-49 vote, the Senate declined to proceed to debate on the latest Democratic effort at a nationwide voting rights overhaul meant to stymie Republican-led state laws restricting voting access.

All 50 Senate Democrats and one Republican, Alaska’s Lisa Murkwoski, voted in favor on [November 3 2021] before Senate Majority Leader Chuck Schumer, (D-N.Y.), changed his yes vote to no for procedural reasons. Casting a no vote allows him to call another vote on the bill later. Senate rules require 60 votes to proceed to debate.

On January 11 2022, Rubio tweeted a brief clip of his appearance on a Fox News segment. In the clip, Rubio criticized United States President Joe Biden’s speech that day on voting rights as relating to a problem that, claimed Rubio, “doesn’t exist”:

An Imgur account shared a screenshot of Sen. Marco Rubio’s partial MLK quote and Rep. Val Demings’ assertion Rubio “blocked voting rights.” Several readers pointed out that the portion of the speech selected by Rubio only mentioned the “promissory note” King referenced, without addressing King’s subsequent assertion that “America has defaulted on this promissory note insofar as her citizens of color are concerned.” Demings stated that Rubio “blocked voting rights,” a claim supported by his documented positions on voting rights, as well as a Fox News appearance during which Rubio objected to Biden’s voting rights speech.