Keanu Reeves said: "To me, Nature is a place where you retreat whenever you feel exhausted or sad. I’m more happy when I’m surrounded by the sound of birds than the sound of people."

On January 12 2022, the Facebook page “Anxiety Freedom” shared the following quote meme, which attributes a quote about nature as a “retreat” from stressors to actor Keanu Reeves: 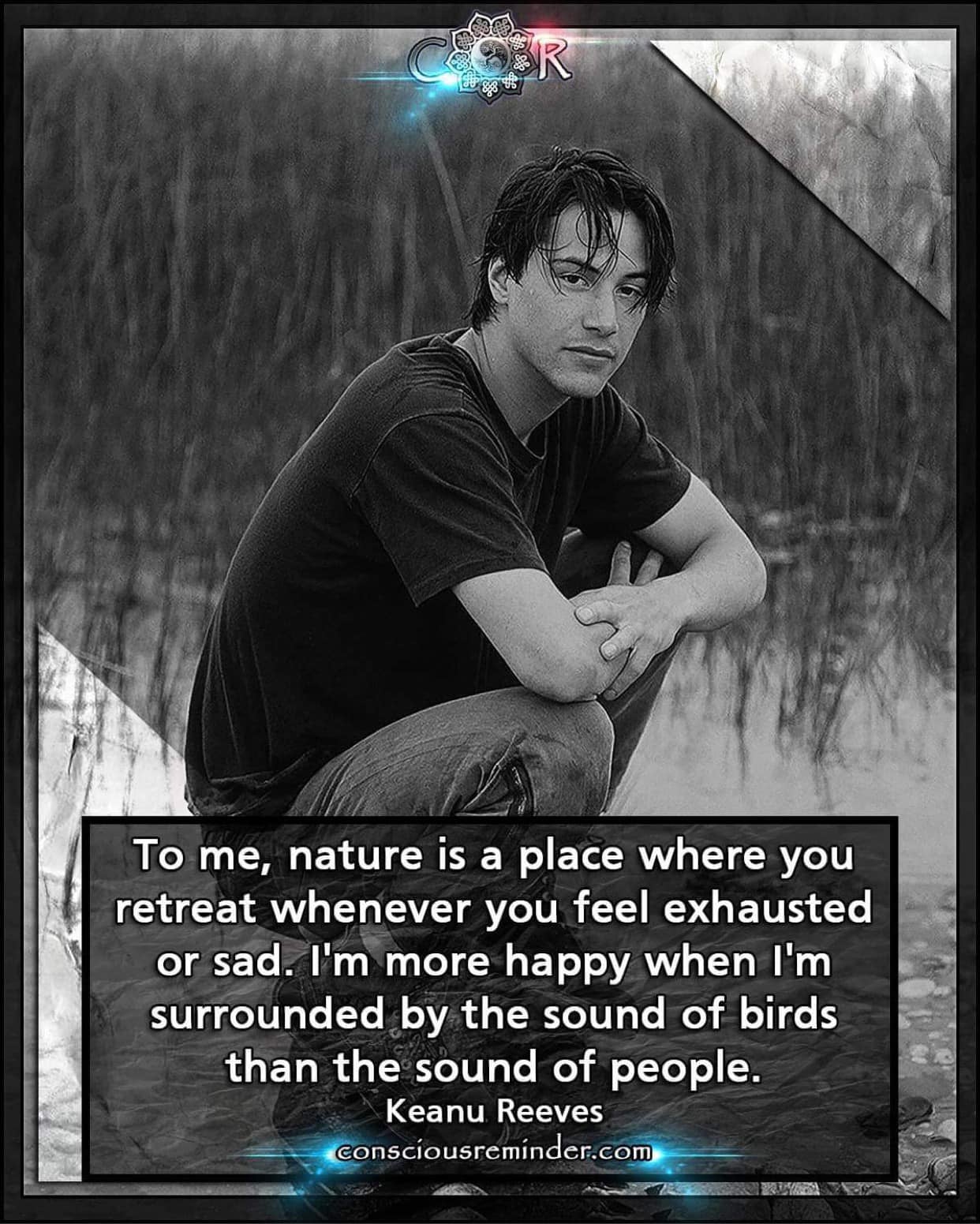 Underneath a black and white photograph of Reeves, the following purported quote appeared:

To me, Nature is a place where you retreat whenever you feel exhausted or sad. I’m more happy when I’m surrounded by the sound of birds than the sound of people.

No citation or other detail about context or a source was included.

Like Jim Carrey, Keanu Reeves is often selected for phony attribution in social media quote memes, which generally consist of pithy bon mots unlikely to spread nearly as virally if they lack a celebrity connection:

Did Keanu Reeves Tweet ‘Be Kind to Animals or I’ll Kill You’?

In some instances, celebrities with common names (like Tim Allen or Dave Ramsey) lead to incorrect attributions. Reeves’ first name is less common than “Dave” or “Tim.”

A search for “Keanu Reeves” and “nature is a place” without date restriction turned up a very limited 12 results. None of the results were interviews or transcriptions, and all led back to meme or quote sites.

As was then-recently the case with a Jim Carrey misattribution, a Medium blogger “quoted” Reeves in an October 2020 post about living in villages:

As it is said, if you truly love nature, you will find love everywhere. Nature makes us understand things in a better way.

This way we escape ourselves in a world of beauty, where we find wisdom and connect to our true self. This is the best refreshment for all of us.

“To me, Nature is a place where you retreat whenever you feel exhausted or sad. I’m happier when I’m surrounded by the sound of birds than the sound of people.”
-Keanu Reeves

Aside from Tumblr and Medium.com blog entries, the primary remaining variations on this claim were sites like “America’s Best Pics.” The oldest iterations we located were on quote sites in August and October 2020, and neither included attribution or any possible source.

A January 2022 Facebook post purportedly quoted Keanu Reeves on nature and its restorative aspects, adding that “I’m more happy when I’m surrounded by the sound of birds than the sound of people.” There was no evidence Reeves said anything of the sort, and a search for a small portion of the quote returned unreliable results. We were unable to locate any video or transcribed indication Reeves ever said or wrote the “nature” commentary, but adding his name to the quote certainly made the otherwise bland commentary successfully engaging on Facebook.