Apple is marketing "smart engagement rings" that tell your partner where you are and if the ring is removed.

On February 1 2022, as Valentine’s Day season got off to a roaring start, a story on the topic of romance and marriage appeared on social media and subsequently went viral: 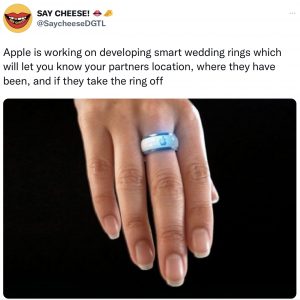 The rumor appears to have been sparked by a Twitter account called “SaycheeseDGTL,” which appears to largely deal in American pop culture news. It consisted simply of a claim and an image that might or might not be related, and without any link or other citation.

What was apparently the original post in this case did not have a high share count, but it the rumor was picked up and discussed so much on social media platforms that it soon became a trending topic: 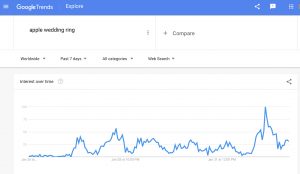 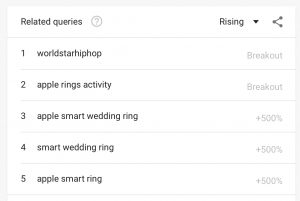 The story took on a life of its own across platforms, with various commenters professing their rage and disgust at the display of what appeared to be yet another major breach of privacy by a tech company — and some aggregator sites even presenting them as a net positive:

Tech giant, Apple Technologies is said to have been engaged in the development of smart rings just like they have done with the Apple Smart Watches that help an iPhone user to perform among others, things he can do with his phone.

According to reports, the introduction of these smart rings is intended to reduce lies in relationships since the watch will be able to record the travel or movement trajectory of a person and upon request reveal details of that movement any day.

Although a little bulkier than a wedding or engagement ring tends to be, it looks like the Apple Ring should be able to fit on one finger without becoming a burden.

Indeed, given the stories about tech companies invading privacy and violating public trust that have appeared with increasing regularity for several years, it is understandable that readers might find this believable. Further confusing the issue is the fact that smart rings do exist, and there are some that appear to be marketed directly to couples, such as the rings described in this 2016 Mashable story:

One of the dorkiest Apple Watch features is the ability to send your heartbeat to another Apple Watch user in real time.

Now a company called TheTouch has taken that dorktastic feature to a new level with the HB Ring, which essentially does the same thing.

The smart rings let two people send each other their heartbeats with a simple tap on the device’s exterior.

The fact that smart rings already exist and have in some form for some time, along with the emotional appeal and the proximity to Valentine’s Day, made the red flags easy to miss — for one thing, the story was simply a claim and and image with no link to any site for verification or validation purposes. For another, the rumor initially appeared on a random Twitter feed without any history of offering either credible analysis or news stories.

But while you can buy smart rings and perhaps conceivably use them to track a spouse (if you are into that sort of thing), there are no smart rings that are being sold specifically for that purpose. In fact, running a search for the story turned up its actual source under all the detritus, which was a “satire” article from 2016 hosted on a site called Faking News (fakingnews.firstpost.com). We were unable to access the actual site, but we did find an archived version of the article, which clarified that the story was intended to be read as tongue-in-cheek:

San Francisco: Apple is all set to replace diamond rings for ever. According to internet rumors, Apple will soon launch a smart engagement ring which will be as shiny and overpriced as the diamond rings. And yes, they will call it (we haven’t made this up) iDo. Apple’s engagement will compete against diamond rings as both the products are targeted towards the same consumer base – people buying expensive and classy stuff to increase their social status.

Apart from being blindingly shiny, iDo will also be over-stuffed with technology – a key advantage iDo will have over the diamond rings. Since the ring finger has direct connection with the heart, iDo can read heart signals and do amazing things with the information. The most revolutionizing tech feature is Moral Messenger. This feature has to be enabled on rings of both partners and it will message immoral deeds one ring owner to the other ring owner, thus preventing sure-to-fail marriages. You can’t get away by taking off the ring as that sends a warning message to the other person.

Another cool feature is Temper Teller. With this feature, your ring can tell you about mood of your partner by changing colors. E.g. red means your partner is angry. This feature sure can help you plan the evening better. My favorite feature is Dream Date. iDo identifies the important dates, remembers them, and reminds you of the anniversaries a week in advance. The reminder signal is blinking LED light and its frequency increases as the important date comes closer. In pro mode, it can also give you tiny electric shocks if you keep ignoring the reminders.

In case that still seems believable, the site features a disclaimer in tiny print at the very bottom of the page:

Disclaimer: Content of this website is a work of fiction. Readers are advised not to confuse the “news reports” of Faking News as being genuine and true.

While it is true that smart rings exist and can arguably be used to invade the privacy of others (much as smartwatches have been used to do), this story actually emerged from a past satire site and was stripped from its original source and circulated to take advantage of both the proximity to Valentine’s Day and the fact that it was old enough for many readers to forget that it was intended as a joke.

Unverified stories such as these, which consist of a photo and a claim without a link or citation, may be used by disreputable accounts to build followers and online clout. They can also be used to track the receptivity of specific rumors across social media platforms for future disinformation campaigns. In any case, whatever its reason for appearing, this story is Not True.