South Dakota launched a campaign against methamphetamine addiction with the tagline "Meth. We're On It."

South Dakota’s push to fight methamphetamine addiction won instant attention when it launched on November 18 2019 — but perhaps not for the reason Gov. Kristi Noem and state officials intended.

According to the Sioux Falls Argus Leader newspaper, the state spent $449,000 on an advertising campaign promoting a treatment and education program around the state with the tagline “Meth. We’re On It.”

The slogan, which resembles the term used for someone actually under the influence of the drug, is a truncated version of a remark Noem makes in a public service announcement running as part of the campaign.

“South Dakota’s meth crisis is growing at an alarming rate,” she says in the PSA. “It impacts every community in our state and it threatens the success of the next generation. This is our problem and together, we need to get on it.”

The ad concludes with an image of the state with the slogan in black text inside: 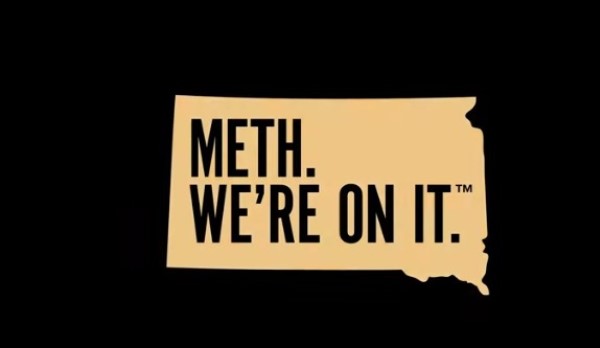 The initiative will also include more than $1 million in funding for meth addiction treatment services as well as more than $730,000 for school programs aimed to prevent addiction among students.