On October 12 2020, a Facebook account shared a screenshot of an apparent complaint to Spirit Halloween’s Facebook page, which was purportedly about outrage over the placement of Donald Trump masks in a section labeled “devil”: 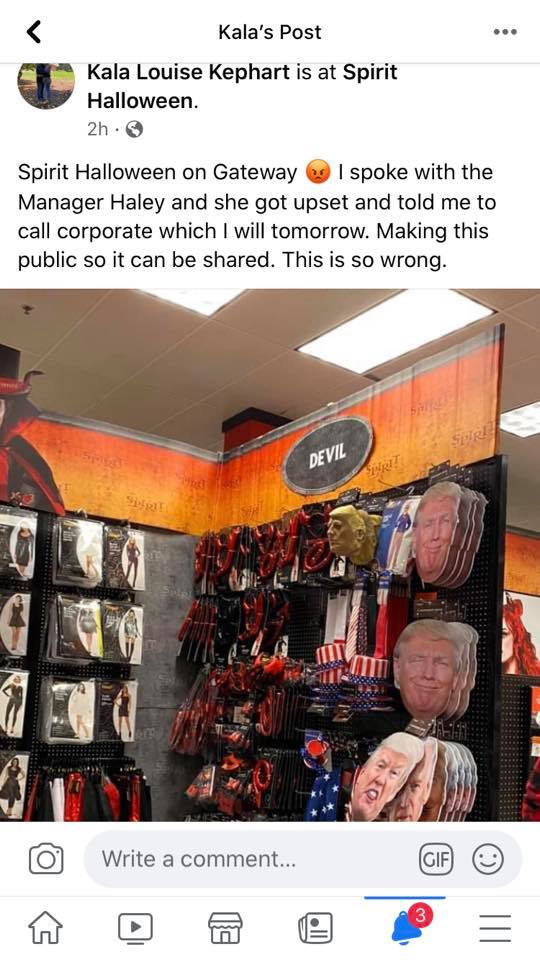 In the screenshot, Facebook user Kala Louise Kephart appeared to write in a public post to the Spirit Halloween page:

Spirit Halloween on Gateway I spoke with the Manager Haley and she got upset and told me to call corporate which I will tomorrow. Making this public so it can be shared. This is so wrong.

Also shown was a photograph apparently captured by Kephart at a Spirit Halloween store. In a section labeled “devil,” roughly half of the items displayed were devilish — red horns and tails. On the right side of the display were several masks bearing the likeness of Donald Trump. Additionally, small red, white, and blue ties and hats were displayed.

Karren didn’t like the Halloween stores display from insanepeoplefacebook

A search of public posts to the Spirit Halloween Facebook page did not return any complaints by a Kala Louise Kephart. It appeared that she had deleted the post and altered her display name — likely due to unwanted attention brought on by 30,000 people sharing a screenshot of her post.

Further contextual information suggested the Spirit Halloween in question may have been one on Gateway Street in Springfield, Oregon. However, “Gateway” was a common name for streets and shopping centers, and so we were unable to verify that to our satisfaction.

If the post was sincere, it appears to have been deleted, and no trace of it remained in the place it was posted. A separate possibility existed — that the post was satirical, and Kephart posted and then deleted it due to the groundswell of mockery it prompted. Although the post was likely shared at one time, we couldn’t confirm if or when it was posted and deleted, nor was the sincerity of the original poster immediately clear.