A popular image set shared both to the “Storm Area 51, They Can’t Stop All of Us” Facebook page also circulated on Twitter:

Those images, shared by local reporter Mick Akers, appeared to match video captured near Area 51 in the early morning hours:

Despite repeated warnings from authorities to stay away, many alien enthusiasts descended upon rural Nevada ahead of "Storm Area 51" day. https://t.co/nC4AFCGhhk

Akers indicated the images were captured around 3 AM local time. Early on, a looping GIF of an individual engaging in a “Naruto run” behind an on-scene reporter went viral:

I don't know what happens next in #Area51storm but this loop goes down in history pic.twitter.com/l6yD9R3DcB

In early July 2019, a number of memes and content related to the Facebook event “Storm Area 51, They Can’t Stop All of Us” began circulating on the social network, as well as other social media. Other outlets reporting two more adjacent events, and an unspecified number of people traveling specifically to Area 51. We will update as information becomes available.

The public Facebook page for the event — which is scheduled to start at 3 o’clock sharp on the morning of September 20 2019 — features the following description:

We will all meet up at the Area 51 Alien Center tourist attraction and coordinate our entry. If we naruto run, we can move faster than their bullets. Lets see them aliens.

As of July 11 2019, the event had 316,000 Facebook users marked as “going” and a further 340,000 marked as interested. Some were evidently confused about whether hundreds of thousands of curious Americans truly planned to “storm” the mysterious Area 51:

What’s going on with this event on September 20th about a bunch of people going to Area 51? from OutOfTheLoop

Initial news reports did not have an estimate of attendees for the Storm Area 51 event, nor a planned but canceled adjacent event in Rachel, Nevada known as “Alienstock.”

Area 51 is somewhat of a meme unto itself. The mysterious military outpost in a remote area of the Nevada desert has been the subject of a number of conspiracy theories, pop culture references, and countless bits of folklore:

The United States Air Force facility commonly known as Area 51 is a highly classified remote detachment of Edwards Air Force Base, within the Nevada Test and Training Range. According to the Central Intelligence Agency (CIA), the correct names for the facility are Homey Airport (ICAO: KXTA) and Groom Lake, though the name Area 51 was used in a CIA document from the Vietnam War.[4] The facility has also been referred to as Dreamland and Paradise Ranch, among other nicknames. USAF public relations has referred to the facility as “an operating location near Groom Dry Lake”. The special use airspace around the field is referred to as Restricted Area 4808 North (R-4808N).

The base’s current primary purpose is publicly unknown; however, based on historical evidence, it most likely supports the development and testing of experimental aircraft and weapons systems (black projects). The intense secrecy surrounding the base has made it the frequent subject of conspiracy theories and a central component to unidentified flying object (UFO) folklore.

Interest in purported plans to head to the region en masse appeared to tick upwards after a July 5 2019 MysteriousUniverse.org post about surging interest in the event:

The last time sometime tried to speed past the armed guards at [Area 51], it didn’t go so well. In January [2019], a man was shot by both the Nye County Sheriff’s Office and the NNSS Security Protective Force Officers after he led them on an 8-mile high speed chase while attempting to drive into the Nevada National Security Site carrying a still unidentified cylindrical object. How will things turn out when thousands of people show up at once?

As of now, 53,000 people have pledged to storm Area 51. Of course, that means they simply clicked “Going” on their social media whatnots, so take that figure with a grain of salt. (Update: as of July 8, over 120,000 people have now said they will attend.) Still, what would happen if let’s say just 9-10% showed up? Would the Nye County Sheriff’s Office and the NNSS Security Protective Force shoot everyone? Just a few? A couple dozen? Hopefully, non-lethal means of deterrent could be used instead. Remember those “sound cannons” Canadian police unveiled during the G20 protests in Toronto back in 2010? Who knows what kinds of spooky gizmos the guards at that place may possess.

Of course, a number of attendees opted to lecture fellow posters about the risks of raiding a secretive government military base:

Let me get this straight. You think that this location is one of the most well kept secrets in the history of the world, a massive hidden stockpile of alien weapon technology, and you think you’ll just “storm in there because they can’t stop all of us?”

Although early coverage of the “Storm Area 51” event suggested that only a fraction of the would-be attendees considered making the trip in earnest (and that many were taking it “seriously“), the page was largely populated with memes: 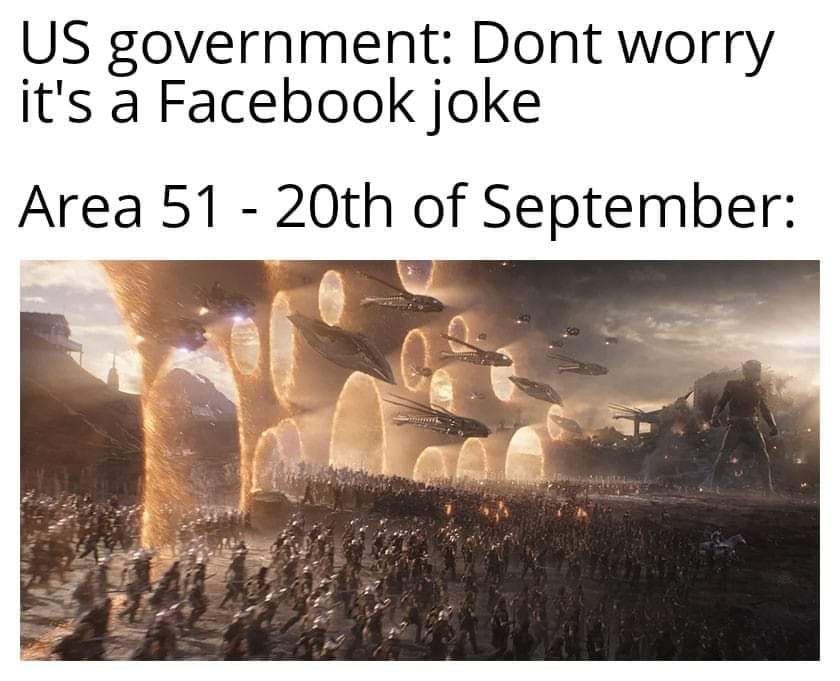 As noted by KnowYourMeme.com, the overarching humor of the event was largely skimmed over in media reports:

Multiple news publications ran the story by July 9th and 10th, including LiveScience, The Daily Mail, and Newsweek, with the highlight of their articles being the high number of those that clicked ‘Going’ to the event, but without acknowledging the joke elements of the event post.

That element of non-seriousness was evident in an early “game plan” shared to the group:

Ok guys, i feel like we need to formulate a game plan, Ive put together this easy to follow diagram here for a proposed plan.

The basic idea is that the Kyles form the front line, if we feed them enough psilocybin and monster energy and say that anyone in camoflague is their step dad, and the entire base is made of drywall then they will go beserk and become an impenetrable wall.

Then the Rock Throwers will throw pebbles at the inevitable resistance (we dont want to hurt them, we just want to annoy them enough to not shoot the kyles as often)

While this is all happening, the two naruto runner battallions will run full speed around the north and south flank, and shadow clone jutsu, effectively trippling our numbers, and overwhelm the base (red circle).

P.S. Hello US government, this is a joke, and I do not actually intend to go ahead with this plan. I just thought it would be funny and get me some thumbsy uppies on the internet. I’m not responsible if people decide to actually storm area 51

Despite the surging popularity of the “Storm Area 51, They Can’t Stop All of Us” event, it was reasonably obvious to participants that the group and its content were humorous in nature, playing off years of folklore and memes. None of the content we saw suggested that anyone posting in the group had any serious intentions to travel to Area 51 to raid an American military base.