The DC Comics character Superman was changed to be a gay man in October 2021.

The announcement that DC Comics’ newest Superman will have a male love interest led to both enthusiasm for some readers of comics and regurgitated moral panics from right-wing pundits and media outlets.

The company announced on October 11 2021 that Jonathan Kent — the current Superman, assuming the mantle from his father Clark Kent — would “find his identity” in an upcoming issue in the November 9 2021 issue of his own series, Superman: Son of Kal-El.

The publisher also stated that the series takes place “in the main continuity of the DC Multiverse,” meaning it is canon across its main line of titles. Elana Levin, a labor activist and pop culture critic, said that DC putting the spotlight on this aspect of the younger Superman’s story weeks in advance of the revelation is a positive sign.

“The reality is, doing a press push around it means that this is the real status quo for the character — that it’s not going to be taken back when the next time somebody else writes the book,” she said. “Which is a problem we’ve seen in the past. I’m not saying this to say, ‘Oh how lovely, big corporation, I clamor for the scraps you send me.’ No, it’s good that they’re doing press around this because this makes it permanent. It isn’t like there’s going to be a new writer or artist coming on the book and they decide that that’s not true about the character any more.”

Levin’s colleague, Logan Dalton, told us that the promotion around Jonathan Kent could mean that he will be treated like Kyle Raynor and Wally West — two characters who also inherited long-standing titles (Green Lantern and The Flash, respectively) but who continued to appear in DC titles after their predecessors were re-inserted into the company’s continuity.

“Clark will definitely go back to being the ‘main’ Superman,” Dalton said. “But having a queer character in the legacy of the ur-superhero is still amazing.”

Dalton also pointed out to us that the cover showing Kent and budding boyfriend Jay Nakamura carried the company’s “DC Pride” branding: 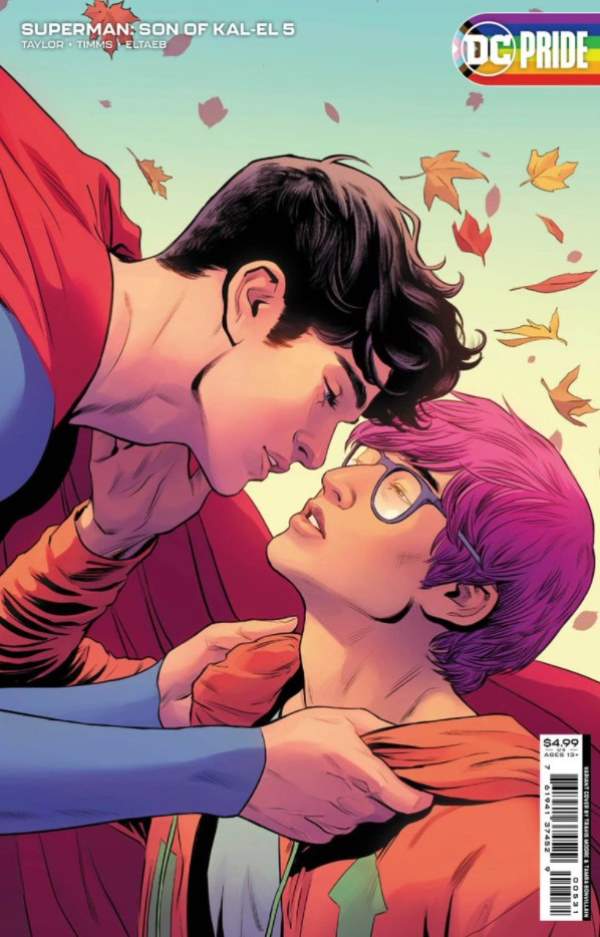 “The cool thing about Jon Kent is that stories like Legion of Super-Heroes have shown him being alive in like the 31st century,” they also noted. “There’s potential for him to have romantic partners of all genders across literal millennia.”

The announcement of Kent’s bisexuality came two months after DC revealed that Tim Drake — the third Robin in the long-running Batman comic-book line — was also bisexual.

Predictably, some on social media complained, falsely, that the original Superman had been “turned gay.” As Media Matters reported, right-wing bloggers and pundits quickly seized on the news, wildly accusing DC of engaging in “indocrination” or, in one case, suggesting that Jonathan Kent being bisexual made him more likely to contract “venereal disease.”

Republican lawmaker Wendy Rogers, an Arizona state senator, was roundly mocked online after smearing the character on Twitter by using a “gay lisp” joke. She wrote:

Superman loves Louis Lane. Period. Hollywood is trying to make Superman gay and he is not. Just rename the new version Thooperman so we can all know the difference and avoid seeing it. 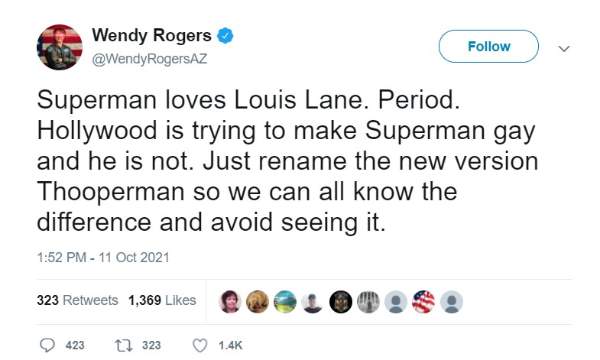 Besides being inaccurate, the rhetoric against Jonathan Kent’s story relies on bisexual erasure. As the Gay and Lesbian Alliance Against Defamation has explained:

For example, referring to two married women as a “lesbian couple” without considering that one or both women identifies as bi. Others may insist that she can’t really be bisexual, her orientation doesn’t matter, or her bisexual identity shouldn’t be mentioned now that she is partnered. Considering a bisexual person either gay or straight depending on the sex of the person’s partner, or calling bisexuals “allies” to the LGBT community, are also forms of bi erasure. Undermining the validity of bisexuality by calling it a “phase” or “confusion” is also an act of erasure. Bisexual erasure plays a critical role in reducing the community’s visibility, and in turn reducing access to the resources and support opportunities bisexual people so desperately need.

The American Institute of Bisexuality has also argued that the practice is relatively recent:

It was only when “homosexual” and “gay” became common labels in modern society that the comparative absence of “bisexual” and “bi” from political discourse became apparent. Rather than the label “homosexuality” applying only those with solely same-sex attractions, those who had both same and other-sex attractions also got swept up in the “homosexual” label rather than being acknowledged as “bisexual”. In other words, “homosexual”, and, eventually, “gay”, evolved as the default labels in political discourse for everyone who engages in same-sex intimacy, whether or not they also have different-sex romantic partners and attractions.

In one public example of correcting an erasure attempt, actress Anna Pacquin attracted press coverage in 2014 when television presenter Larry King asked her if she was a “non-practicing bisexual” because her husband, Stephen Moyer, is a cis-gender man.

“I don’t think it’s a past-tense thing,” Pacquin said, adding, “Are you still straight if you are with somebody, and — if you were to break up with them or if they were to die, it doesn’t prevent your sexuality from existing. It doesn’t really work like that.”

In another attempt to push disinformation around the Jonathan Kent character, both Sky News Australia and the English newspaper The Daily Mail claimed that his series was being “canceled,” only to be debunked by writer Tom Taylor.

“Jon Kent’s solo title is being renamed ‘Adventures of Superman: Jon Kent’,” Taylor wrote on Twitter. “So Jon has an iconic Superman series to himself and to include his name in the title.”

Taylor also posted a photograph showing the 16th issue of “Son of Kal-El” topping the comics sales charts on Amazon:

Not cancelled. Jon Kent’s solo title is being renamed ‘Adventures of Superman: Jon Kent’. so Jon has an iconic Superman series to himself and to include his name in the title.
As for sales, let’s check what the #1 selling comic is on Amazon right now… oh.
Try reporting facts. pic.twitter.com/bDgnha7gUn