"Swedish tv accidentally [put] subtitles from a kids' show over a political debate, and it's brilliant." 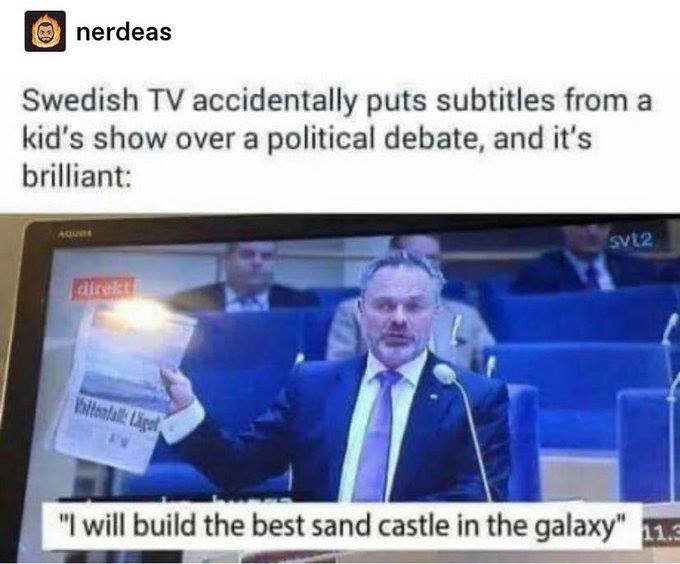 Beneath an apparent username from an unspecified platform (“nerdeas,”) two captions appeared. The first was the post itself, and the second the purported subtitle (which had presumably been converted from Swedish to English).

Swedish TV accidentally puts subtitles from a kid’s show over a political debate, and it’s brilliant:

“I will build the best sand castle in the galaxy”

At the top left corner of the TV screen was the word “direkt,” and a station identifier (svt2) was visible to the right of the top corner.

SVT2 (SVT Två; commonly referred to as Tvåan), is one of the two main television channels broadcast by Sveriges Television in Sweden. Launched in 1969 by Sveriges Radio, the channel was until the 1990s the most watched in Sweden for many years, but now serves as SVT’s specialist television network, carrying more highbrow and minority programming compared to the more mainstream SVT1.

Incidentally, the claim was shared to Reddit’s r/europe in October 2017, indicating the caption swap was not in 2021, but in May of that year:

TIL: Swedish TV channel accidentally put subtitles from a kid’s show over a political debate in May from europe

But it was apparently earlier still. A January 2016 CBC Canada article (subtitled “It’s not every day you see a minister talking about dinosaur equality”) reported that the incident had purportedly taken place that month:

Parliamentary debates can be pretty boring, unless your elected leaders appear to be arguing about sand castles, dinosaurs, and submarine trains.

As seen above, [in January 2016] the leader of Sweden’s Liberal party seemed to make a surprising declaration.

In reality, he didn’t say any of what was captioned in the video.

SVT2 was running the Swedish equivalent of CPAC, SVT Forum, which showcases debates in the Rikstag, the country’s national legislature.

The closed captions for a children’s show were switched with that of the debate on some TVs according to SVT, which says it did not intentionally switch the captions.

CBC credited a January 15 2016 Imgur post by u/TheBlondeSwede for screenshots of the swapped captions:

In that post, the original Swedish caption was visible instead of the English version. It read:

We ran it through Google Translate, which returned a proximate version:

Part of what made the claim amusing was imagining that the glitch had been broadcast widely. But CBC added context suggesting both that the captions may have been specific to that Imgur user, and adding that they had “gone viral several times”:

As for how this happened, it might have been a problem with TheBlondeSwede’s TV and not SVT, Sweden’s public broadcaster.

“On some older TVs can still choose the old teletext page for the different channels’ subtitles, while checking on a different channel,” SVT’s Undertexts manager, Anna Zetterson, said in Swedish on its Facebook page. “So SVT, or any operator, didn’t send these out. But it is something you can amuse yourself with on an older television set.”

As a result images like these, where the visuals are mismatched with the subtitles, has happened quite a few times before.

“It has gone viral several times and it may look funny,” Catarina Wilson, a spokeswoman for SVT, told the Australian Associated Press.

In the excerpt above, CBC linked to a purported Facebook response from Zetterson, and an “Australian Associated Press” article. Neither link was functional; the Facebook page linked was completely blank, and the Yahoo News link redirected to the main page.

Dinosaurs, sand castles, earth creatures. That was, among other things, what the party leaders talked about in the Riksdag on Wednesday [January 13 2016] – at least if one were to believe the subtitles on TV at the newspaper Smålandsposten’s editorial board.

In reality, their television set had happened to receive subtitles from Barnkanalen’s various programs, something that was immortalized in a picture of the newspaper’s editorial writer Blanche Jarn and news director Jens Pehrson. Several of their photos have since been widely circulated on Facebook and Twitter.

An October 2021 Facebook meme stated that Swedish television accidentally added subtitles from a children’s television show to a political debate, a claim that has circulated intermittently since January 2016. Iterations were often misdated and many instances of original documentation were obscured due to link decay. According to Aftonbladet, the glitch occurred on January 13 2016, after which time images of the humorous captions spread on social media.