Pripyat residents gathered on what was later called the "Bridge of Death" to observe the Chernobyl meltdown; none survived.

In May 2019, the release of HBO’s show Chernobyl caused a spike of interest in all aspects of the nuclear disaster — including the revival of some long-forgotten rumors. A postscript relating to a scene in Pripyat brought back one suck story: that most or all residents gathered on what was later dubbed the “Bridge of Death” died of radiation-related illness.

Early in the series and well before the post-credits scene in question, civilians in Pripyat are depicted from the vantage point of a bridge, watching the events of Chernobyl’s then-ongoing meltdown. A man is seen with an infant in a stroller, and children look up at snow-like material falling from the sky.

In later hospital scenes, the man and the baby are seen pleading for help. Both appear to have radiation burns on their exposed skin. At the conclusion of the fifth and final episode of Chernobyl, a sequence provides further information about the individuals affected and their fates since:

At the 2:14 mark, two screens address the people on the bridge the night of Chernobyl’s meltdown: 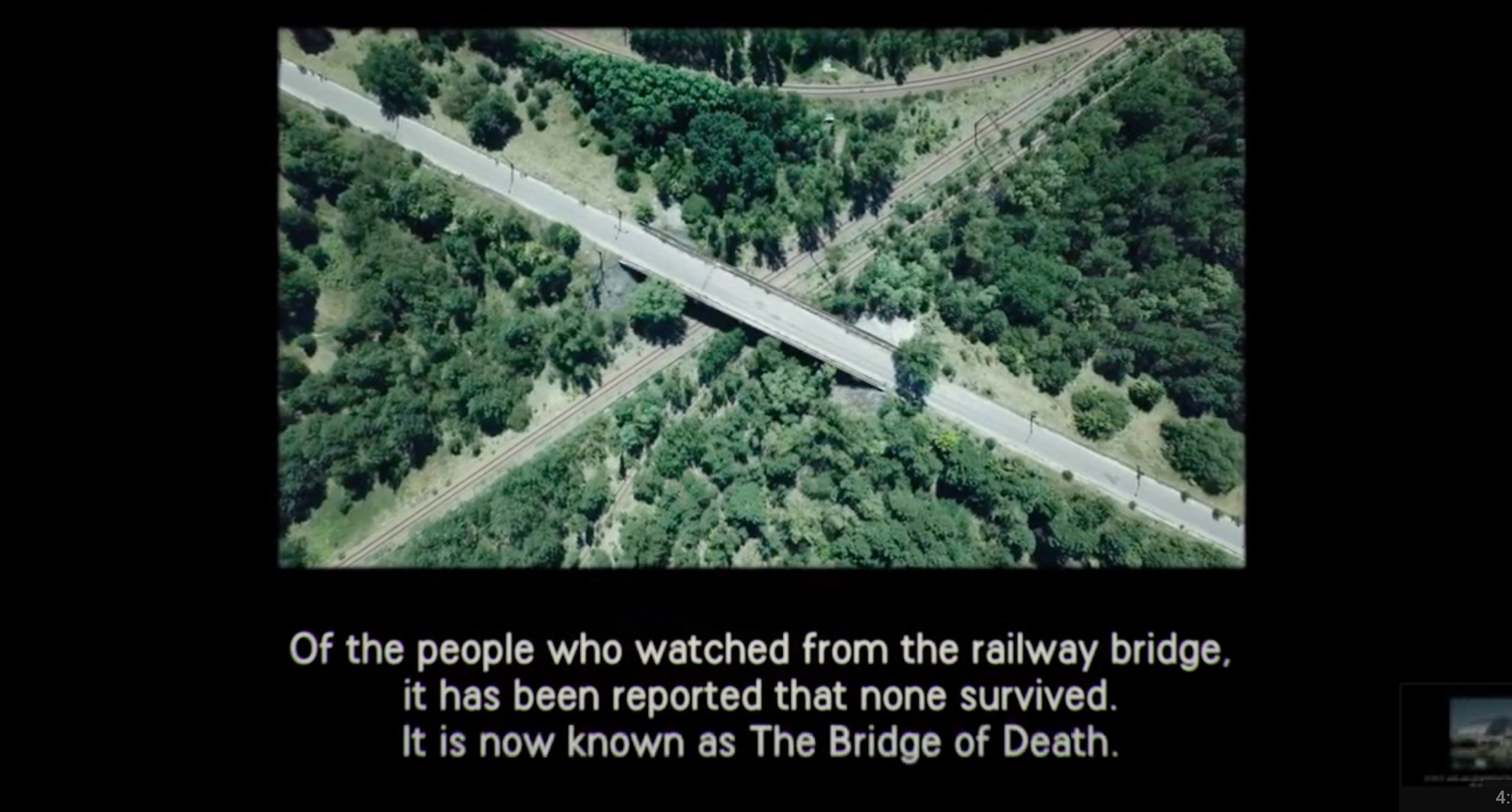 Text on the screen reads:

Of the people who watched from the railway bridge, it has been reported that none survived. It is now known as The Bridge of Death.

In what was hailed as a meticulously-detailed production, Chernobyl‘s bridge claim stood out. Many fans of the show observed that regardless of the claim’s historical accuracy, it did not seem to agree with what the viewers observed in the miniseries itself. (That factoid appeared in “separating fact from fiction” reporting on the new series.)

For one thing, many key players in Chernobyl’s accident were present in the control room for Reactor 4 (the affected unit) on the night of the meltdown, both historically and in the docudrama. Many quite clearly endured exposure to the ensuing fallout at higher rates than those who observed from off the power plant’s premises — such as on the Pripyat bridge.

Nevertheless, many of those present in the vicinity of Reactor 4 for much of the night’s events and in the days afterwards were seen weeks and months later in the show’s chronology, having initially survived the radiation to which all were exposed on the night of the Chernobyl disaster. But according to the pre-credits scene, of those gathered off Chernobyl’s premises on the bridge, purportedly “none survived.”

Further, Pripyat’s civilians were seen leaving town in the drama about a day and a half after the meltdown, never to return. By contrast, many present on the night of the accident in the course of their work duties are seen at the site of the accident in the weeks and months after the incident, and again, surviving through the trial at the end of the miniseries. Presumably even if those in the area received high doses of radiation on the night of the accident, people who remained at the site were exposed to far higher, sustained doses.

On Chernobyl‘s subreddit, debates about the fate of the Pripyat residents gathered on the bridge were commonly shared:

As mentioned, this is not a new debate. An undated Telegraph gallery titled “A tour of Chernobyl and Pripyat” shows the structure with a caption:

We’re standing on the ‘bridge of death’, so called because on the day of the explosion, people gathered on this bridge to see the beautiful rainbow coloured flames of the burning graphite nuclear core, whose flames were higher than the smoke stack itself. They were all exposed to levels of over 500 roentgens, a fatal dose[.]

Wikipedia’s main page on the Chernobyl incident does not make mention of the bridge, but its “Deaths due to the Chernobyl disaster” page addresses the rumor from both the perspective of it being an urban legend, as well as the lack of record-keeping with respect to ailments developed due to diffuse radiation in the area prior to evacuation. A subsection, “Surviving evacuees’ accounts,” describes dueling accounts by official and former residents of the areas surrounding Chernobyl:

Since 1986, officials have tended to discount as inaccurate, inexpert opinion the claims of some surviving Chernobyl Exclusion Zone and Polesie State Radioecological Reserve evacuees that their own observations of deaths attributable to the disaster are not reflected in official records and tallies. For example, authorities have long dismissed as ‘urban legend’ some Pripyat evacuees’ claims of high death rates among fellow citizens who gathered on a railway bridge—the so-called ‘Bridge of Death’—to watch the exploded reactor’s blazing fire and glowing, electric blue column of ionized air in the midst of visible nuclear fallout on the night of the accident.

Still more controversially, some surviving Chernobyl Exclusion Zone and Polesie State Radioecological Reserve evacuees take particular issue with the longstanding position of constituent United Nations agencies to discount as misinformation, ‘urban legend’, or Radiophobia the claims of some evacuees that during the weeks and months directly after the accident, they witnessed more immediate disaster-related deaths due to trauma and radiation sickness that they argue are not reflected in the official record. For example, Nikolai Kalugin—an evacuee from a village now included in Belarus’ Polesie State Radioecological Reserve—claimed to Newsweek in May 2019 that his daughter died in the weeks after the accident as the result of what he maintains were unrecorded local cases of radiation sickness:

“They brought a little coffin. … It was small, like the box for a large doll. I want to bear witness: my daughter died from Chernobyl. And they want us to forget about it.”

However, that position argues that instances of generalized radiation-related illness were undercounted, not whether the “Bridge of Death” rumor itself was accurate. But without the official records, which were widely described as (at best) incomplete in the aftermath of the disaster, the story of the people on the bridge has long been presented as it was in HBO’s Chernobyl — as an unknowable mystery.

A May 2019 Bulletin of the Atomic Scientists article included an interview with journalist Adam Higginbotham, who spent more than ten years interviewing eyewitnesses and reviewing documents from the disaster. Higganbotham describes an initial dearth of reporting exacerbated both by the Soviet secrecy at the heart of the Chernobyl series and limitations on international reporting from the USSR. After referencing inaccurate initial reports in the United States that claimed 15,000 people died in the disaster, he explains how folklore shaped long-held beliefs about Chernobyl:

[Following the disaster,] all Western correspondents in the Soviet Union were being sequestered in Moscow. They weren’t permitted to go anywhere near Ukraine, and the KGB took active measures to limit the amount of information that they could even get out of Moscow to their offices in the West. These reporters who were stuck in Moscow tried to get information from whatever sources they could. In the week after the explosion, the New York Post ran a story where they reported that 15,000 people had been killed, and that the bodies had been buried as nuclear waste in a massive pit somewhere in Ukraine. Stories like that—exaggerated, crazy science fiction—combined with people’s innate fear of radiation to make people think to this day that thousands of people were killed in the explosion … subsequently, other accounts have been published, and they contain a lot of horrifying myths and folk tales that appeal to people’s worst expectations and conceptions of what might happen in an accident like this.

The interviewer then asks for an example of those referenced myths, which Higganbotham answers in comments regarding Pripyat’s Bridge of Death:

So, there’s two really good examples. People talk about the “bridge of death,” about the idea that a load of residents of Pripyat went out to stand on this railway bridge, which stood at the top of Lenina Prospekt, the main boulevard into the city, and watched the burning reactor from that standpoint. And that, in the subsequent years, every person who stood on that bridge died. I could find no evidence of that. Indeed, I spoke to a guy who was seven or eight at the time, who did indeed cycle over to the bridge to see what he could see at the reactor, which was only three kilometers away. But he’s not dead. He’s apparently perfectly healthy.

There’s a lot of these assertions made, because they’re conveniently horrifying.

In a subsequent exchange, Higganbotham reiterates that the scattered epidemiological effects of Chernobyl’s meltdown were notoriously hard to measure:

[Author]: Is there anything about the accident that is still a mystery?

[Higganbotham]: I think the number of people who ultimately will die and sicken as a result of the radiation released remains something of a mystery. And it remains deeply contentious, obviously.

[Author]: After all this research that you’ve done, what’s your best guess about how many people died?

[Higganbotham]: All I can tell you is what the parameters are. If you look at the studies that have been done by these respected epidemiologists, like Elisabeth Cardis, the figure in her studies for the total number of fatal cancers attributable directly to radiation received as a result of the explosion ranged from around 9,000 to 15,000. At the other end of the scale, you’ve got organizations like Greenpeace with estimates of deaths ranging up to 200,000, and from what the epidemiologists and the radiation specialists I’ve spoken to have suggested, there’s no scientific basis for that at all.

The fate of the people on Pripyat’s “Bridge of Death” the night of the Chernobyl accident remains unknown. However, the long-circulating claim that all subsequently died was false, as individuals on-site the night of the meltdown and even some who were in the control room for Reactor 4 survived well beyond the disaster. In Chernobyl‘s postscript, the chyron states “it is said” that none survived — that indeed has long been said, but evidence strongly suggests that the opposite is true.